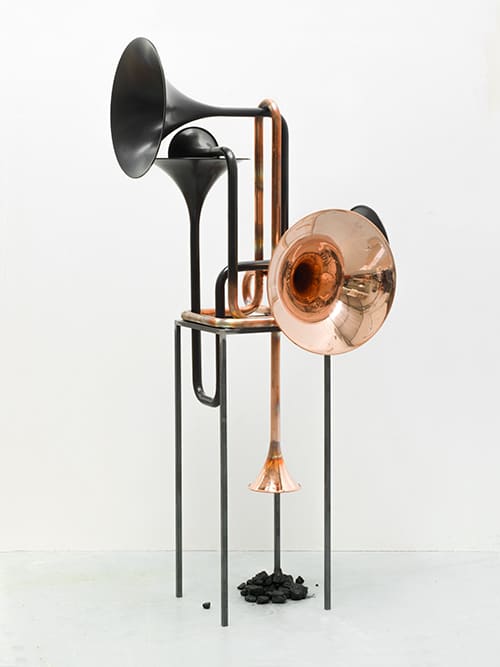 Reality is an abstract term we feed with definitions we agree on in order to live together. It’s like the measurement, weight, or value system—it’s all invented,” Alicja Kwade argues. [1] Born in Katowice, Poland, in 1979, and now living in Berlin, Kwade’s artistic practice focuses on the eternal search for meaning by interrogating reality, convention, and society.
“A country, a timezone, it’s all abstract meanings. I mean, there are no countries. There are no borders. It’s like all decisions we do and we agree on,” Kwade announced while in a conversation with adjunct curator Pedro Alonzo.
Guided by scientific principles, Alicja Kwade breaks complex structures into comprehensible segments while shrouding her art in a mystery, both cosmic and human. Alicja Kwade’s work questions the structures of our reality and society and reflects on the perception of time in our everyday life. Her diverse practice is based around concepts of space, time, science, and philosophy, taking shape in sculptural objects, video, even photography.
Kwade is heavily inspired by the contemporary philosopher and historian Yuval Harari, who has thoroughly documented the absurd world we have created for ourselves.
“Over the centuries, we have constructed a second layer of fictional reality on top of the objective reality, a reality made of fictional entities, like nations, like gods, like money, like corporations. And what is amazing is that as history unfolded, this fictional reality became more and more powerful so that today, the most powerful forces in the world are these fictional entities.” [2]
Kwade attempts to translate these ethereal concepts into our tangible realm through the use of pure materials like copper and stainless steel. In order to achieve this, Kwade employs the language of sculpture and architecture to examine the origins of perception and measure how information is transferred to an object or form.[3]
As part of a fundamental role in Kwade’s oeuvre, time is materialized in Kwade’s Hypothetisches Gebilde (German for “Hypothetical Creatures”), series that references wormholes and string theory.[4] These Hypothetisches Gebilde copper piping systems with trumpet-shaped endings, creating a sculptural metaphor for a wormhole; also known as an Einstein-Rosen Bridge, a distortion of space-time that in theory may allow almost instantaneous transit to anywhere in the universe. Underneath or inside some of the cone-like openings Kwade adds granite in various forms; from chunks of stone to crushed heaps, as a sign of time and transience.
In this line, Adrastus Collection’s Hypothetisches Gebilde, (2017) Alicja illustrates this aerospace theory through a system of copper piping with trumpet-shaped openings, of which only segments can be seen from the various vantage points painted in black. The six openings in Hypothetisches Gebilde, (2017) symbolize the different layers of time and space as the possibility for flux or change. [5]
Her work has been exhibited in multiple solo shows in institutions such as the Haus Konstruktiv, Zurich; YUZ Museum, Shanghai; the Eli and Edythe Broad Art Museum; the Museum Frieder Burda in Baden-Baden; the Whitechapel Gallery in London, the Kunsthalle Schirn in Frankfurt/Main; the Public Art Fund in New York. The artist has participated in numerous group exhibitions in major institutions such as the Hayward Gallery, London; the Musée d’Art Moderne et d’Art Contemporain (MAMAC) in Nice; the Bass Museum of Art, Miami Beach; the KW Institute for Contemporary Art in Berlin; the Palais de Tokyo in Paris; the Museum of Contemporary Art Tokyo (MOT) and the Kunsthalle Wien in Vienna, among others. Alicja Kwade has also taken part in international events all around the world: the 57th Venice Biennale in Venezia, the Aros Triennale in Aarhus, the Kochi-Muziris Biennial, and the Triennale di Milano. One of her greatest known works is a site-specific monumental installation for the MET Rooftop Commission in 2019.