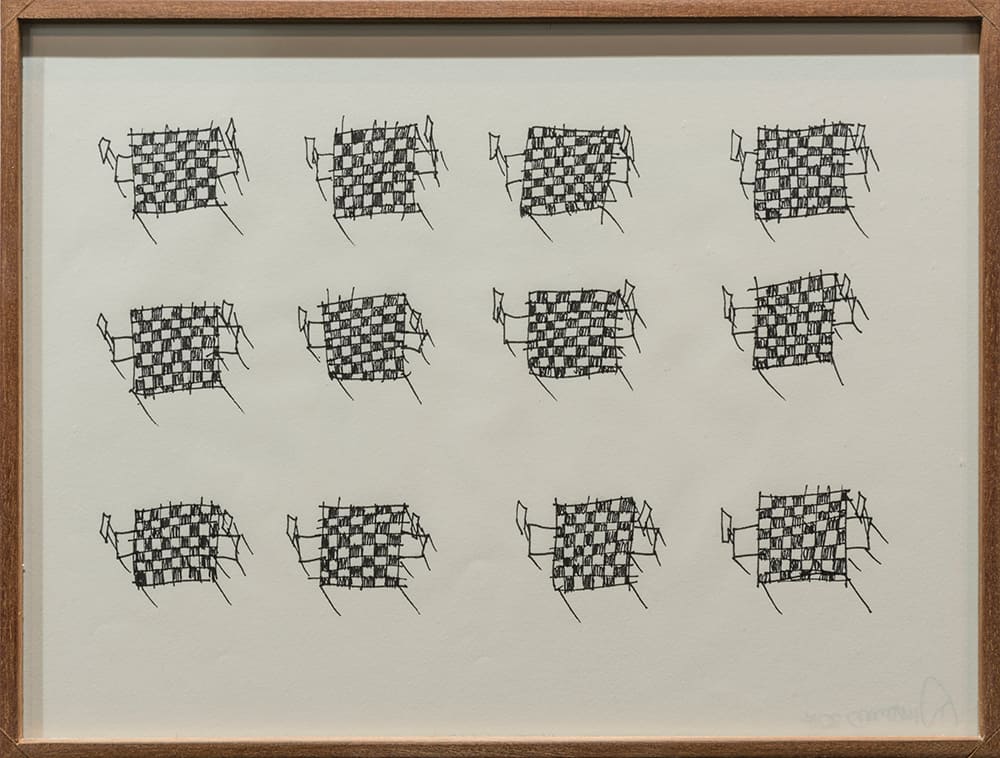 Cuban artist Wilfredo Prieto (1978) has continuously characterized his work with simplicity. His sculptures, installations, drawings and paintings function as tools for exploring social and political issues with a poetic yet vibrant sensibility. Prieto questions the underlying structures of contemporary culture and reflects on consumption, society, and thought systems themselves. Although Prieto initially was trained as a painter, his work eschews classification within a specific medium. This is exemplified in the work Untitled (Twelve Deaths) which itself, reviews Twelve Deaths (2012), also proudly part of Adrastus Collection.

Twelve Deaths (2012) is the corporeal representation of Untitled (Twelve Deaths), a paper drawing of the physical installation which was part of the exhibition Leaving something to chance, a project that explores the possibilities of an accelerated creative process.[1] Prieto moved his workshop to one of the galleries of the Sala de Arte Público Siqueiros (SAPS) and continued to work without the direct intervention of a “curator” who would be producing new daily artworks.[2] The exhibition was an exercise in which the traditional roles of the museum are challenged to emphasize the artistic production. Although the studio is not part of the exhibition, Prieto moved his creative factory to the museum; a gesture which enabled the institution and the general public to become active participants of the artist’s work. Prieto included the audience in the deconstruction of the cannon suggesting how the meaning of art is involved throughout the collective process. Prieto’s delicate and deconstructive drawings seen in Untitled (Twelve Deaths) subsequently turn into a series enthralling sculptures of twelve tables and chairs with twelve chess boards displaying twelve different check-mate positions. Prieto’s use of the two-part drawing and the installation further explores the creative process and highlights the use of mundane everyday objects.

Untitled (Twelve Deaths) is a depiction of the use of the space clearly articulated through pen and paper. His gesture is subtle, cynical and straightforward, but lacks bias towards materials and meanings. The artist´s methodology illustrates a critical and refreshing point of view, which partakes from everyday life gestures and actions, to take advantage of some of Postminimalism and Conceptualism strategies.[3] Internationally, Prieto’s work is critically acclaimed for maintaining thoughtful and provocative dialog on the formal and conceptual aspects of artistic production. Therefore, the combination of the drawing and of the installation allows one to consider the two-part development of the artistic process but with a hint of irony. Prieto explains, “and I think my work as an artist isn’t really to create these ideas but to grab at them. They are floating in the real world, like clouds. They are just there; anyone can see them and pick them up. They belong to everyone, you see?”[4] Ultimately giving the Cuban artist Wilfredo Prieto his well-earned reputation as a “superminimalist” for his ability to tease out the sublime in ordinary and often overlooked objects.