A Walk with Mario Garcia Torres: Review of his most recent exhibition held at Museo Tamayo

Mario García Torres’ body of work over 15 years has been challenging the art’s condition. Torres’ diversified communication platforms have examined the artistic complicity and its location within time. He has placed a particular focus on studying “the museum” as an imagined or tangible institution. This interest has taken him on a peripatetic journey around his most recent exhibition at Tamayo’s Museum entitled Caminar Juntos (Let’s Walk Together).

The artistic evolution of Mario García Torres has driven a quest about art as an occurrence. That is to say, Torres considers art as a riddle of affective relations that once dissolved, evidence an era’s politics. Specifically, his individual exhibition at Mexico City links the precedence with the incentive, separates the source from the intention and finds a way to find a space among time. This statement is applied by ceasing to date his artworks. The disjunctive creative process in the production procedure of an artwork does not necessarily involves a timing singularity. By eliminating the creation’s date of his art pieces, Mario García Torres decontextualizes it and confers freedom of immediate interpretation and chronological restrictions. This suggests that any of his artworks might have been produced anytime during his career and might different meanings in distinct eras. 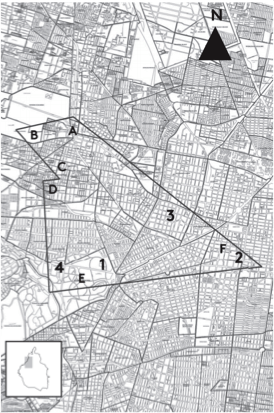 The distinctive curatorial structure by Sofía Hernández involves multiples venues within a perimeter of 1300 acres. This area corresponds to the whole surface of Museum of Art Sacramento, which has been overlapped on a Mexico City’s map. Museum of Art Sacramento was an ethereal extramural museum founded by the artist between 2002 and 2004, with the intention to hold and develop his wandering ideas. The artist has delimited this perimeter by placing a pile of stones on the sidewalk, indicating the ethereal museum’s boundary.

Tamayo’s exhibition, Caminar Juntos (Let’s Walk Together) initiate with a small retrospective of Mario Garcia Torre’s artwork. This sector presents, not only his ability in working with multiple mediums, but also, depicts his meticulous research for each project. Furthermore, the diversified venues in which the artist has developed and presented his artistic production range from deserts to museums, and his inspiration resources involve document archives. The artist’s multiple perspective is exemplified by three projects: First, the production’s process for the Museum of Art Sacramento –which intrinsically involves Tamayo’s exhibition. Second, his project Abastecedora de Galerías, which intended the commerce of products set aside to improve the exhibition’s museography. For example, an air-freshener with a turpentine essence and a wide range of white-colored painting inspired in famous artists’ pantone tones such as Hermenegildo Bustos, José Maria Velasco, Carlos Mérida and Georgia O’Keefe. Third, Prometo…, a series of manifests written on hotels’ stationary used whenever one of his projects required his travel.

Following with the exhibition, the genius curatorial narrative in Caminar Juntos (Let’s Walk Together Together) is established around three motifs: the empathic appropriation, correspondence and the contemporary archeology.

The empathic appropriation is based upon unknown artworks from other artists by making a forensic analysis of the evidence leaved after their creation. This appropriation discernment re-signifies its original production context and questions concepts of originality and influence. Empathically, the artist approaches to each of the original sources that gave birth to the artwork and tries to relocate it in the contemporaneity in an emotive, temporal and special dialogue. For example, in his artwork Branco, García Torres makes a musical appropriation of an unknown poem of the famous Brazilian sculptor Lygia Clark. Jean Luc Godard, Christopher D’Arcangelo, a local frontier radio station and even the Mexican singer Rigo Tovar are being quoted and appropriated by the artist. Immersed in this thematic line, his artwork Las Variables Dimensiones del Arte, (2010) is worth to stand out. This art piece presents Mario García Torres’ investigation regarding a robbery that took place at in the Museo de Bellas Artes de Caracas in Venezuela in 1963, when a group of activists took possession of a complete exhibition in order to make a political statement against the repressive government. The merit of this investigation is the direct relation with the people involved during this event, implicating them as part of his appropriation process. 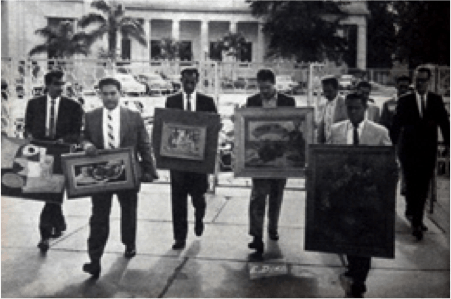 The second curatorial line is based on the correspondence as part of his artistic process when creating an artwork. Whether asking an interview or a permit, the creation process in Mario García Torres’ artworks involves the direct communication between the artist and the people involved in his archeological project. Just like a painter uses a brush, Mario García Torres uses mailing as a profiling tool to transmit his content. Through the combination of narrative essays and the act of letter writing, the texts in his artworks are far more than manifests; they deal with the emotional decadence between the objective and the subjective postures of the same information. Example of this argument is Carta abierta a Dr. Atl (2005); in this video, Mario García Torres contemplates the interconnection between art, culture, and location through an imaginary letter written to Gerardo Murillo (1875–1964), a Mexican landscape painter and writer who worked under the pseudonym “Dr. Atl.” The camera roves over Barranca de Oblatos, a canyon outside Guadalajara that

was a recurring subject of Murillo’s landscape paintings. García Torres’ correspondence raises critical questions about the relationship between the global and the local state of art, and about ways in which it can transform a site’s cultural and material specificity. Adrastus Collection’s is present in this exhibition with the 19-min video entitled Tetela (n.d.), which is part of the installation Las extrañas cosas que ven mis ojos (n.d.). Located in Cuernavaca’s Meditation Center, this video presents the events that happened in Santa María Ahuatitlán and the region of Tetela.

Finally, the contemporary archeology is deeply immersed in Mario García Torres’ production. This term refers to the direct attachment with the historical setting involved in each of his investigations. The ideals that once were linked to these locations are recovered and exposed once again like fossils over a canvas. The artworks resulting from his field trips, produce a sensation of analogic solitude, which characterize these locations. For example, in the installation Culpa al tiempo (2006), Mario visited the remaining fake architecture produced as scenery for Hollywood’s Old West movies in Durango, a state in the northern of México. The artist focused in one of these houses to display the discourse of the Cold War’s contingency.

One of the most important historical field investigation took place in the One Hotel, a hostel created by the Italian artist Alighierro Boetti in Kabul, Afghanistan. The exhibition Caminar Juntos (Let’s Walk Together) has a complete room dedicated to the artworks that were inspired in this location; such as the short film Té (1991), in which the artist juxtaposes a trip to the natal artist’s city Monclova, and the trip to Kabul. The two artists, though from different generations and backgrounds, traveled the same path, undertook the same journey and finally they inhabited the same rooms. Mario García Torres and Alighierro Boetti, though strangers to each other and the Afghan context, they both decided to open and manage, for a period of time, a place offering accommodation and hospitality, a guest house in Kabul. In this way, Garcia Torres, unlike a normal exhibition curator, found a space for a more intimate and personal evocation of Boetti’s figure and artistic practice. García Torres places himself and Boetti in a constant oscillation, guest and host, past and present, proposing an experience based on the redefinition of the very concept of the artist and the work. Who is who? When? Where? 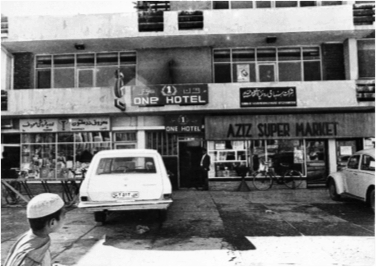 Caminar Juntos (Let’s Walk Together) is not delimited to the physical space of the Tamayo’s Museum. One of the external locations of the exhibition is the Montecarlo Hotel. The proposed itinerary in this region is dedicated to the continuous visit of the Japanese artist On Kawara (1932-2014), specifically referring to his postal series I Got Up. In the Montecarlo Hotel, Mario García Torres created a new artwork ¿Quién le tiene miedo a la repetición? (s.f.), in which he created new stationary for each of the guests’ rooms, recalling his series Prometo… (described previously in this review). 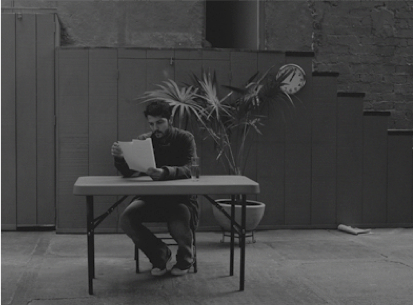 This installation is only available for the guests and will be experienced through their own history and figuration. A few steps away, La Casa del Cine Mx is another alternative venue which will be presenting the artist’s movie Crudo y Silente (2003-2009), a film study about time and silence, the unsaid and the forgotten, featuring Diego Luna as a silent reader, and the soundtrack is composed by Plastilina Mosh.

Parallely, The Geology Museum takes also part of the exhibition Caminar Juntos (Let’s Walk Together). Inspired by the work produced by José María Velasco during the time he worked as an illustrator for the National Museum, he was part of the cataloguing methods used by the institution to canalize and exploit Mexico’s natural resources. This alternative exhibition space presents artworks like Un Cabo la, un porto ca (2013), La Forma de la Memoria (2014) and Es vaquero, mi papá… (s.f.), a family fieldtrip to the abandoned and fake scenery in Durango, inspired this personal narrative in which Mario’s father realized that the construction materials for these Hollywood houses were taken form local materials. This discovery was made when he threw a stone to the air, and realized that it was very light. The subjectivity in Mario García Torres’ artworks articulates the speculation around the sensitivity, the deceitful sensations, the fluent time, and the unstable memory. The anecdotic narrative of this artwork was captured by a photographic diptych which has become –fortuitously- as the public image of the exhibition.

The versatile artist complements the exhibition Caminar Juntos (Let’s Walk Together) by a monologue presented in the theater “El Granero”. Originally written by Aaron Schuster, this adaptation by García Torres is a genealogy that looks identifies the origins of the movie Mr. Arkadin – A Confidencial Report (1955). The main character is called Allen Smithee, who during the play, is sometimes described as a person and sometimes described as a thing. By picking up the cinematographic figure of Allen Smithee, García Torres presents a debate regarding the place of the art and the artists setting through time.

Adrastus Collection is proud to hold Mario Garcia Torres’ production from which part of it is presented in this exhibition at the Tamayo’s Museum. Reinforcing Torres’ ideal of a contemporary archeology and its artistic complicity of location embedded within time, the future facility that will hold Adrastus Collection at Arévalo, Spain will redeem the visibility of the region of León y Castilla. Furthermore, the contemporary architecture will recapture the lost magnificence of the first Jesuit College and expose it into the world as the new contemporary art mecca.