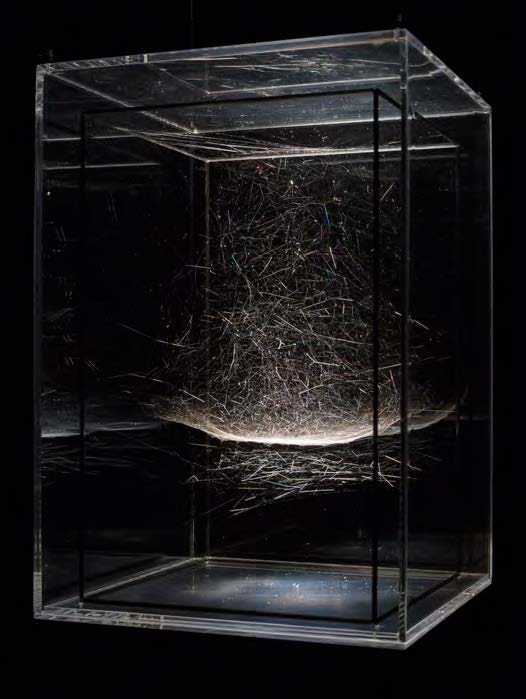 Hidden within many of Tomás Saraceno’s grand visions of cloud cities, climbable structures, and solar balloons, a single thread runs through his fascinating worlds: spiderwebs. “When cosmologists or astro-physicians were trying to explain how the universe formed, the way they were trying to describe it was through this type of cosmic webs and the geometrical analogy was a tridimensional spiderweb,” he has explained in the past.[1] Saraceno’s key interests lie in the scientific observation of environmental, biological and physical systems and their poetic correlation to human perception and ideas about the living environment. With this in mind, the work Carina, (2013) proudly part by the Adrastus Collection, we can analyze the fascination the artist has with not only spiderwebs but also the dimensionality the universe has with art.

Tomás Saraceno’s research and work with spider webs originates from his interest in astrophysics, as explained previously, he considers that each of these translucent boxes represents an entire universe to him. The artist’s fascination with cobwebs arises from applying the image of a spider web in astrophysics where it is used to represent galaxy formations. The ongoing research project of Saraceno started as an investigation of these universal patterns. The webs take form in his laboratory in the rainforests of Ecuador, where they can find several social spider species, ones that live together in large groups. First, he and his team put a solitary spider into a transparent cube where it will spin a web. Then, they replace that spider with a colony of social spiders. As individuals build on top of the original spider’s creation, Saraceno and his team rotate the boxes, inducing disoriented new patterns.[2] The artist’s continuous interest in models of cohabitation, biodiversity, adaptability and hybridity led him further to experiments with spiders growing their homes in an artificial environment.

Carina (2013) consists of an illuminated, translucent cube that host unusual webs built by these different species of spiders. The artist presents this box container with carbon fibre and spider silk webbed inside interior so that we the viewer can observe from the outside. The artistic experiment weaves architecture, biology, network analysis and social behaviour into questions of sharing, communicating and building.[3]  This abstract three-dimensional structure created by the insects points out to little known facets of the universe and become associative signs of cohabitation, generational succession, sociality and survival. The pattern that the artist creates is therefore linked to the nature of these animals and he is able to build upon a natural phenomena that is then in turn presented to us as a work of art. The artist’s body of work ranges from macrostructures of the outer space to micro bio-systems of nature, that then invite us to imagine alternative ways of the organization of life. This work, like many other of his projects, was developed in collaboration with scientists, astrophysicists, arachnologists, radiologists, engineers, biologists and others[4]  The process and unique findings of these collaborations are not only scientific discoveries captured in the works presented in vitrines but also the proposal for a study of spider webs as a form of artistry. In the condition of microgravity, this work can therefore be submitted to the European Science [5]  as well as to global gallery exhibitions.

Tomás Saraceno is an Argentinian contemporary artist and practice is informed by the concepts linking art, life science and the social sciences. In 2007 Saraceno activated projects aimed towards an ethical collaboration with the atmosphere, including Museo Aero Sola. These projects grew into the international, interdisciplinary artistic community Aerocene, who with Saraceno in 2020 launched the certified, untethered flight Fly with Aerocene Pacha, achieving six world records for altitude, distance, duration (both in the general and female category) using only the warmth of the sun and the air. Saraceno’s interest in spiders and their webs led to the formation of Arachnophilia.net and the Arachnomancy App. Through these platforms, Saraceno invites people from around the globe to weave the web of interspecies understanding and take part in the challenge of Mapping Against Extinction.