“It is as if my frame of mind is analogue when I draw: my unconscious reverie made manifest as an impression on a surface”. 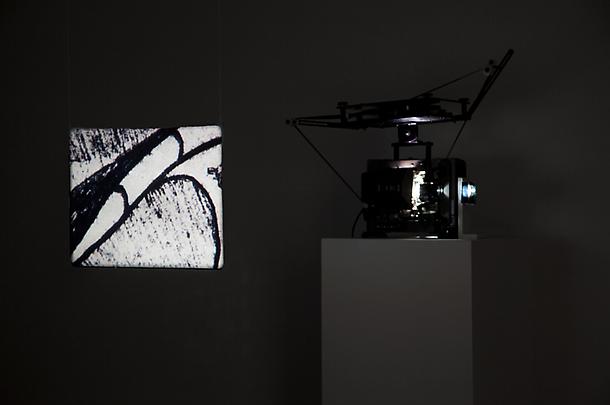 The monumental cycle of Romanesque sculptures in the cloister at Santo Domingo de Silos has long attracted visitors, including generations of artists. When Tacita Dean made her first visit there, many features in this historic complex engaged her attention, not least the Gregorian service of Vespers with which the monks end the day. Some months later, she returned in order to study more closely doodles and graffiti on and around the cloister’s colonnade, marks that she imagined might have been made over the centuries by the abbey’s inhabitants as they whiled away their hours in lonely seclusion.

As often in Dean’s practice, an image or chance encounter becomes a mnemonic palimpsest. Resonating in her imagination, it sets off a train of allusions that prompts recent as well as more distant memories. Perhaps the most far-reaching of the many references generated by Silo’s cloister was of an elaborate black and white doodle drawn decades earlier when Dean, a schoolgirl, attended weekly Mass with its maker: a young friar studying theology at the nearby university. Tellingly, if perhaps unaccountably, she had kept his drawing safely lodged inside a book as if she intended to do something with it, one day…. Among more recent memories was one involving a sheet of paper covered with intertwined pencil marks. As Giorgio Morandi obsessively arranged bottles and vessels on the worktable in his studio in order to compose his still life paintings, he kept track of their shifting placement by the simple device of tracing their footprints.

In “The Friar’s Doodle” (2010), Dean has used a rostrum camera so that the film is comprised of pans, as opposed to the static shots which were formerly a hallmark of her work. Cut on the movement, this material has been edited to follow closely the drawing’s intricate meandering profiles. At no point does the camera pull back to reveal the elaborate composition in its totality. Seen cumulatively, as it were—in fragments, over time—the surrealistic composition can be known fully only in the mind’s eye. Dean’s refractory manner of revealing the original image serves, metaphorically, to underline the protracted processes of discovery required to decipher the bigger picture inscribed in Silos’s fabric. For the carved and etched subjects in the photographic inventory which Dean shot during her second visit to Silos offer a sometimes indecipherable, often fractured record that undermines any presumption that history might be singular, solid and sealed. This archive becomes a visual analogue of day dreams, musings and flights of fantasy that, while fixed in the past, is nonetheless familiar and accessible: kin to our own everyday, speculative forays that drift outside time, with no discernible endings. While “The Friar’s Doodle” similarly attests to the persistence of intuitive impulses that drive us to position ourselves within the lexical discourses of history, it also invites reflection on the interpretative mechanisms we deploy to decode their graphic residues.