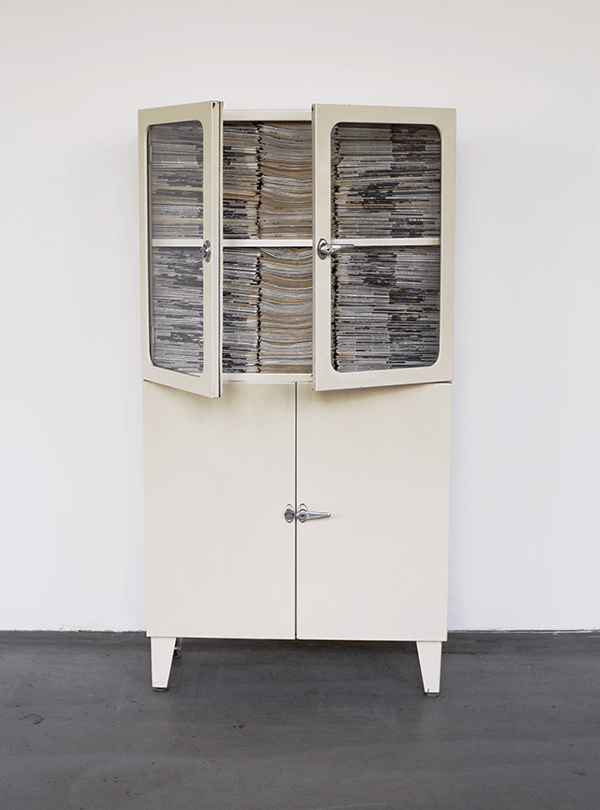 Only Good News (2000) is an installation by Roman Ondak, consisting of a medical cabinet with shelves stacked with stacks of newspapers. The work contrasts between art and everyday banality, reinterpreting the commonplace of the closet and the newspapers, thus activating subjective abstractions.

The artist has repeatedly used medical cabinets, cylinders and laboratory and hospital containers, combining them with objects from a different context, as in Trial and Error (2013) and Skyline (2019). In Roman’s own words, we can understand that Only Good News introduces us to “a medical cabinet with glass doors behind which drugs would normally be stored on shelves. Here, the shelf space is completely filled with stacks of newspapers, as if the news is in the process of healing. ” It is also possible to think that these newspapers, which supposedly contain only good news (as the title suggests), are stored in the doctor’s office for a time when we need optimism as medicine to recover and heal. In his work, Ondak works with the phenomenon of time and with conceptual changes, where any object or event can become part of his artistic approach. In this case, the good news can serve as a spark of hope in the face of the uncertainties launched by the beginning of the 21st century. 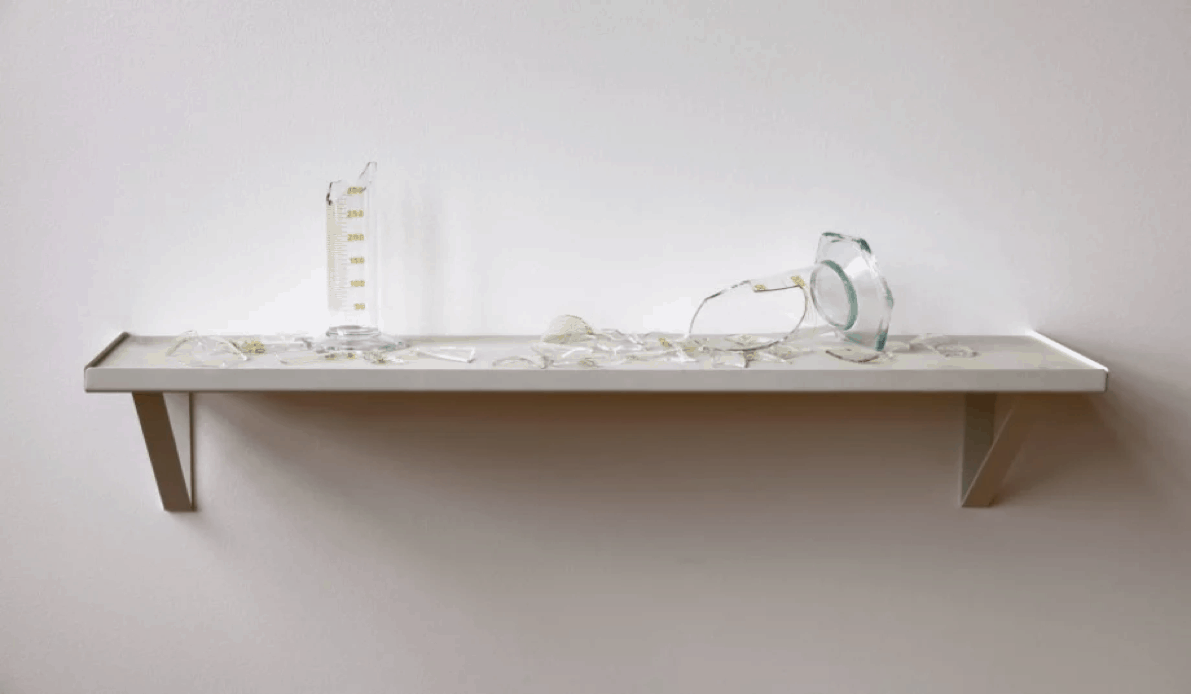 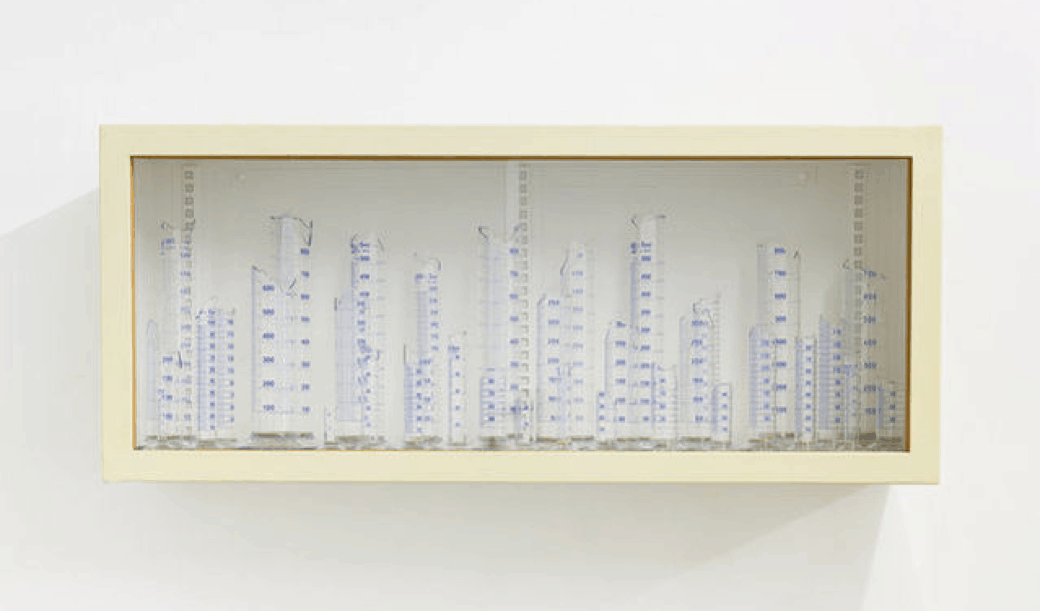 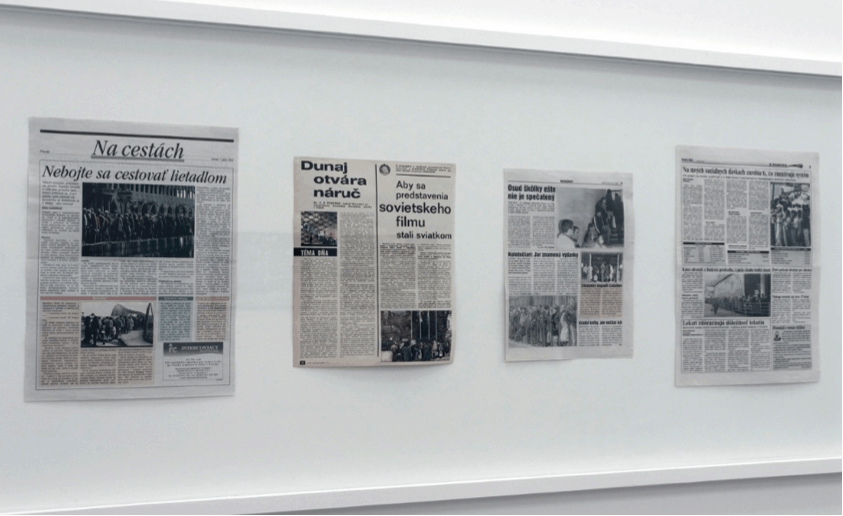 Awaiting Enacted II (2003) Series of 8 collages of newspapers and frame.

Shelves, tables and other exhibition elements are metamorphosed into sculptures and installations. The cupboards have already been filled with books and broken test tubes, as in Saturated Library (1995) and Trial and Error (1997), works that demonstrate Ondak’s commitment to tense the usual meaning of signs, proposing displaced situations. In Only Good News, we can see the same compositional elements of Awaiting Enacted II (2003), which displaces the newspapers that materialize as action in Good Feelings in Good Times (2003), the first performance acquired by Tate Modern, in 2005.

Another work that is part of the Adrastus Collection is Drawer of the Enthusiast (2012), an installation that consists of a small compartment where different objects can be stored, a strange drawer that comes out of the wall and invites us to discover little by little what small debris are kept there. Ondak produces this work from the safeguard of the small elements that he found in his son’s pocket after returning from preschool, conceptually another poetic attempt to capture time, condensing in the tiny dimension of objects, small papers, chewing gum boxes, broken pens, filed away as fractions of a universe of discoveries.

Considered an indispensable name on the international art scene, his training in the area begins with pedagogical processes learned in his native land, which led him to work with objects common to any context or reading, rehearsing the transfiguration of a global semiotics, by a semiotics of life, without borders. His creations are full of sarcasm and humor, and show the influence of conceptual and minimalist art, while finding references in the subversive tactics of artists from the Soviet Union.

In 2010, a Chilean copper and gold mine, Mina San José, suffered an explosion that resulted in the confinement of 33 miners for 69 days in a small shelter 700 meters deep. The rescue was accompanied by millions of people around the world. An extreme experience that changed each of these men in a resounding way, and from this phenomenon, Ondak creates a replica of the rescue capsule, a three-dimensional impression of a real event. The exhibition Time Capsule (2011), presented at Modern Art Oxford, England, evokes historical contexts, media layers and individual stories of courage, faith and hope, so Ondak turns the gallery into a space to cross the different vectors of dynamics current global. 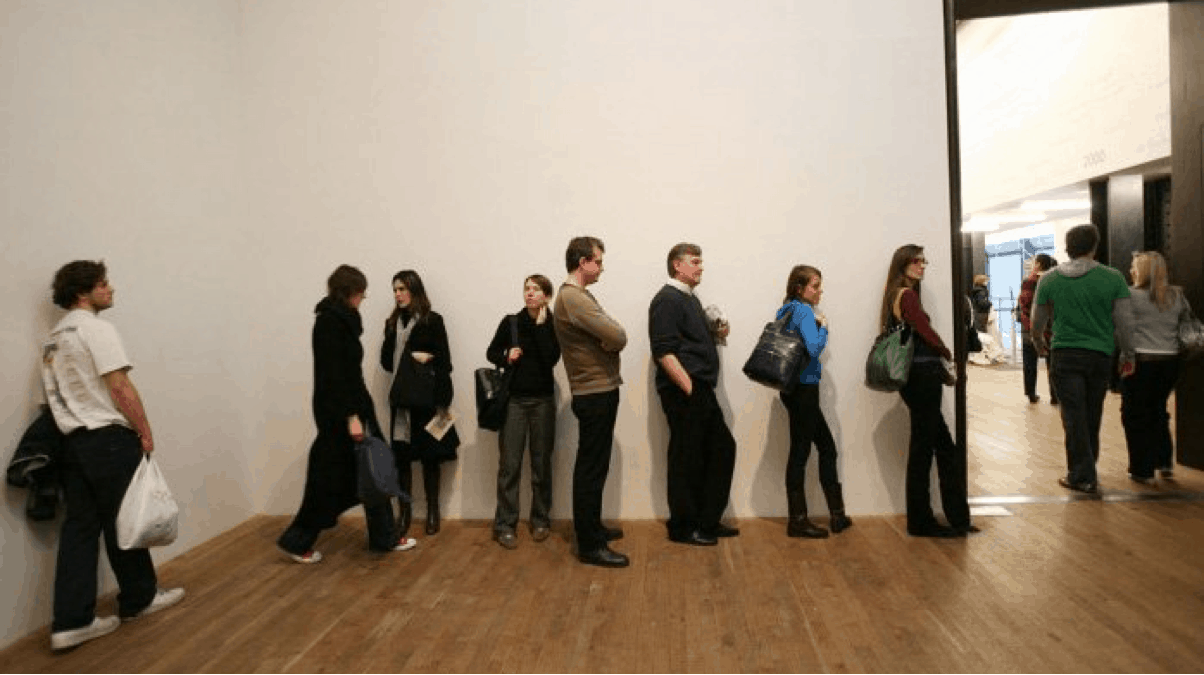 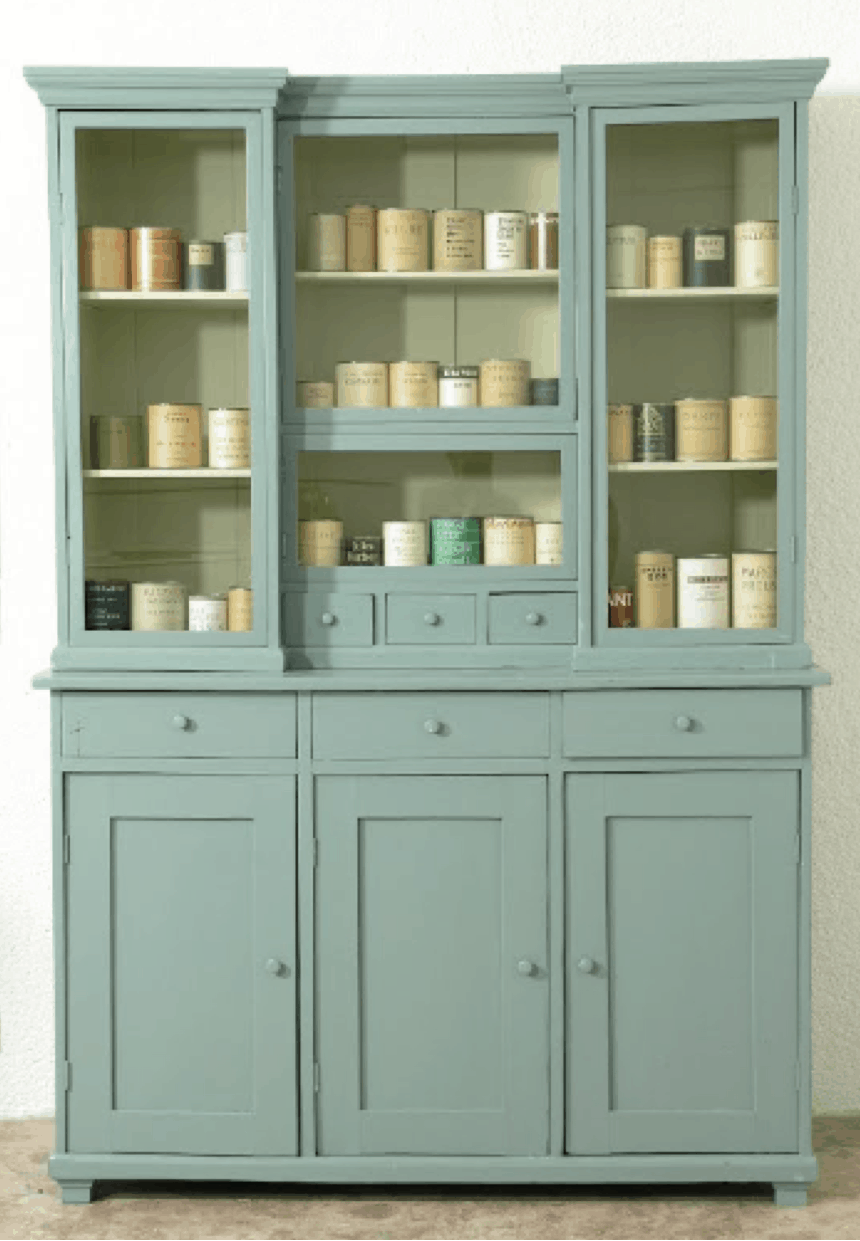 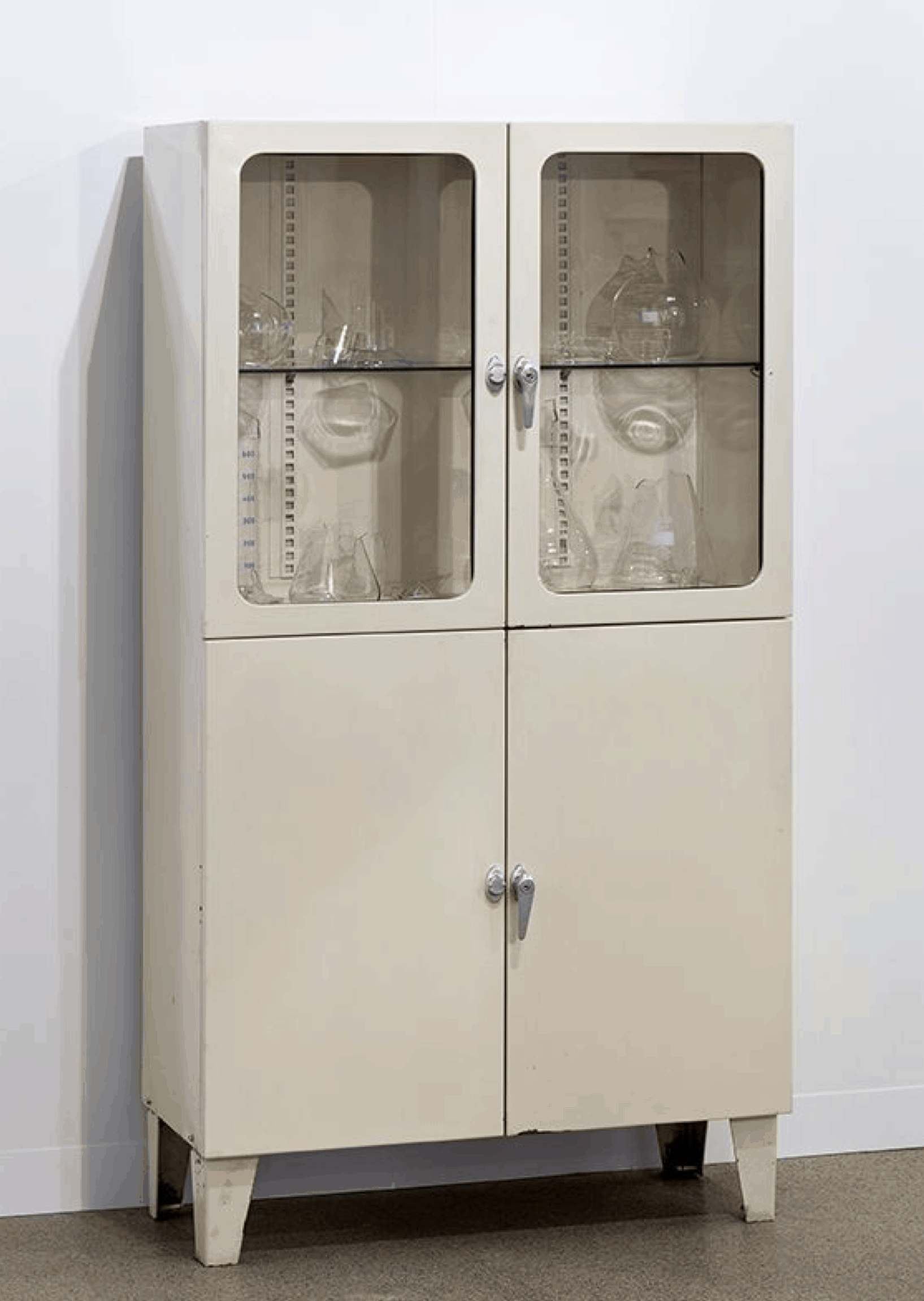 The artist constantly plays with travel through space and time, this is a recurring theme in his creation. In the year after Time Capsule, do not walk outside this area (2012) was created, a work that is also part of the Adrastus Collection and that combines two major themes reiterated in its research: 1) movement from one place to another, either physically or imaginatively; and 2) the subversion of the rules and conventions that determine daily life, as well as the representation and reception of art. In do not walk outside this area, the artist plays with the usual boundaries of aircraft wings, which passengers often see only from cabin windows. In his installation, however, they leave the sky for the telluric field, lose the atmosphere of untouchability and become the mundane environment where those who once contemplated them can now walk.

The artist’s work meets the definitions of Adrastus, who questions neutral claims and passive enjoyment, believing that each work is capable of activating perceptions and new ways of being and participating in the world. The two go hand in hand in the sense that the work of art is not only the object itself, but also the ideas it carries and the atmosphere it creates.

Born in 1966, Roman studied painting at the Academy of Fine Arts in Bratislava, from 1988 to 1994. He also studied at the Slippery Rock University, Pennsylvania (1993), at the Collegium Helveticum in Zurich (1999-2000), at CCA, in Kitakyushu (2004), and received grants from DAAD in Berlin (2007/08) and Villa Arson in Nice (2010). Throughout his career, the artist participated in prestigious international art exhibitions such as, documenta 13 in Kassel (2012) and in the 50 and 54 Venice Biennials (2003 and 2011), where, in 2009, he also exhibited in independent in the Pavilion of the Czech and Slovak Republic. In 2018, he received the prestigious Lovis Corinth Award in Germany, for his artistic contribution. Various articles, essays, texts in exhibition catalogs, scientific texts and several monographic publications have been published on his work. His works are represented in the most prestigious collections in the world. He also had individual exhibitions at the Kunstverein in Cologne; at the Tate Modern in London; at the MoMA in New York and at the 53rd Venice Biennale. He currently lives and works in Bratislava. 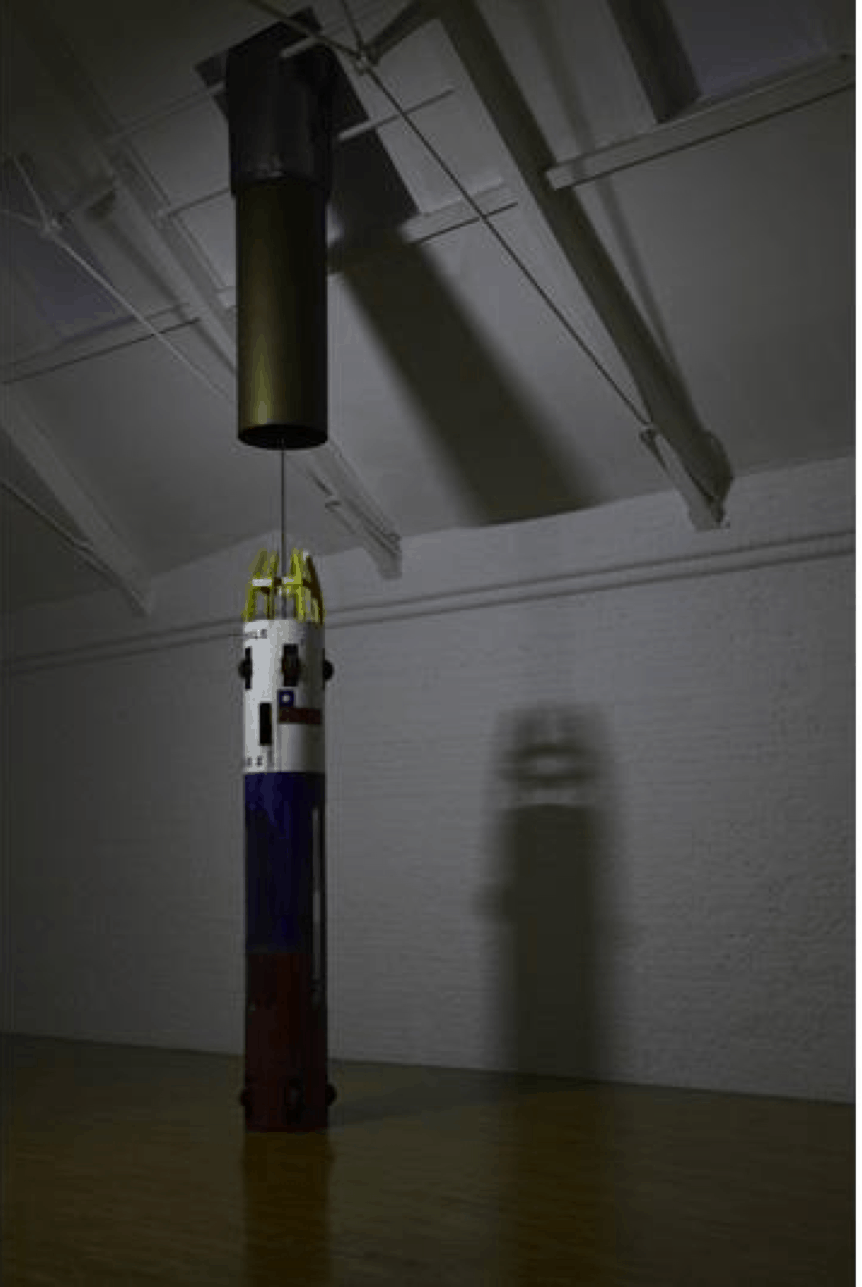 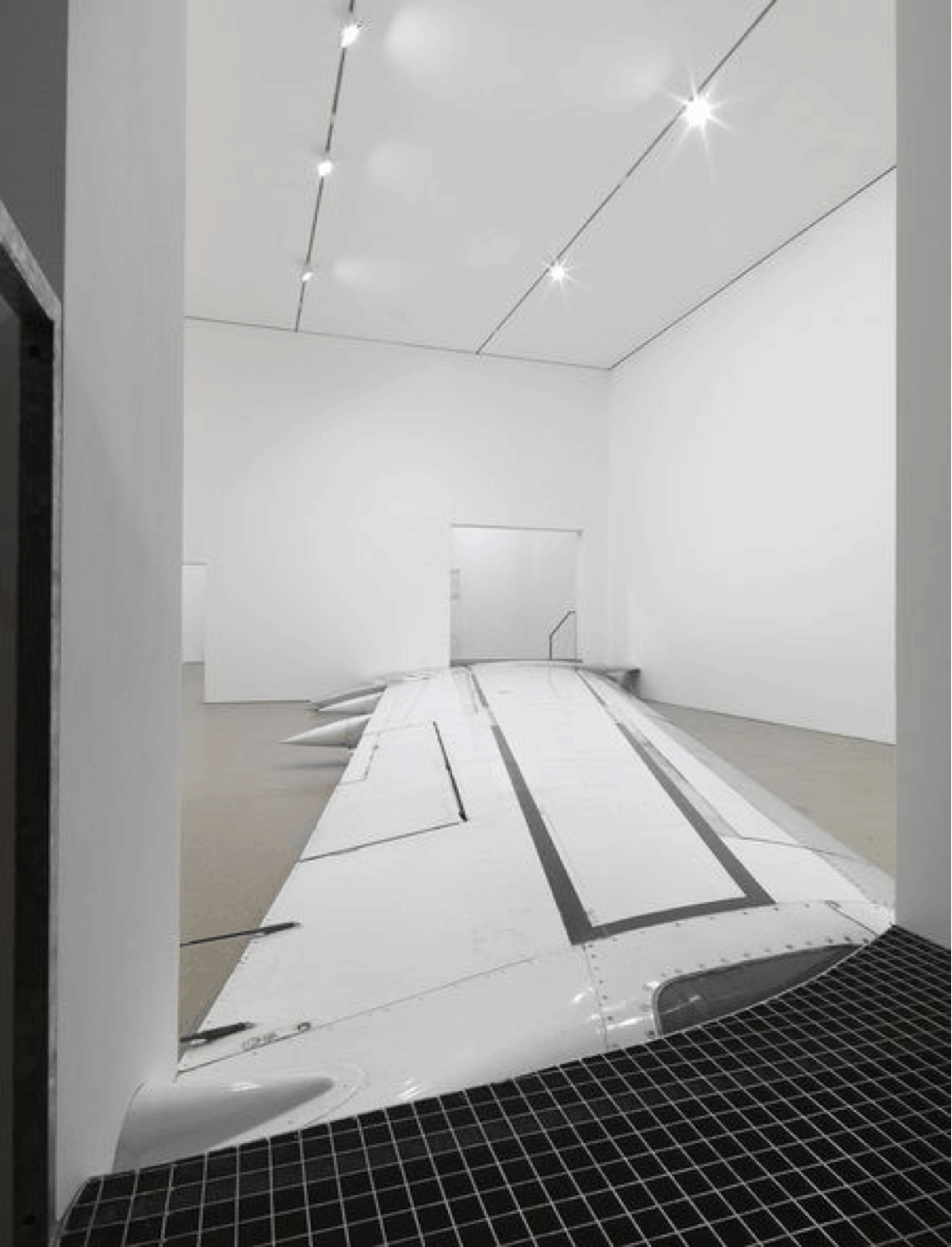 Do Not Walk Outside This Area (2012). Deutsche Guggenheim, Berlin. Installation. 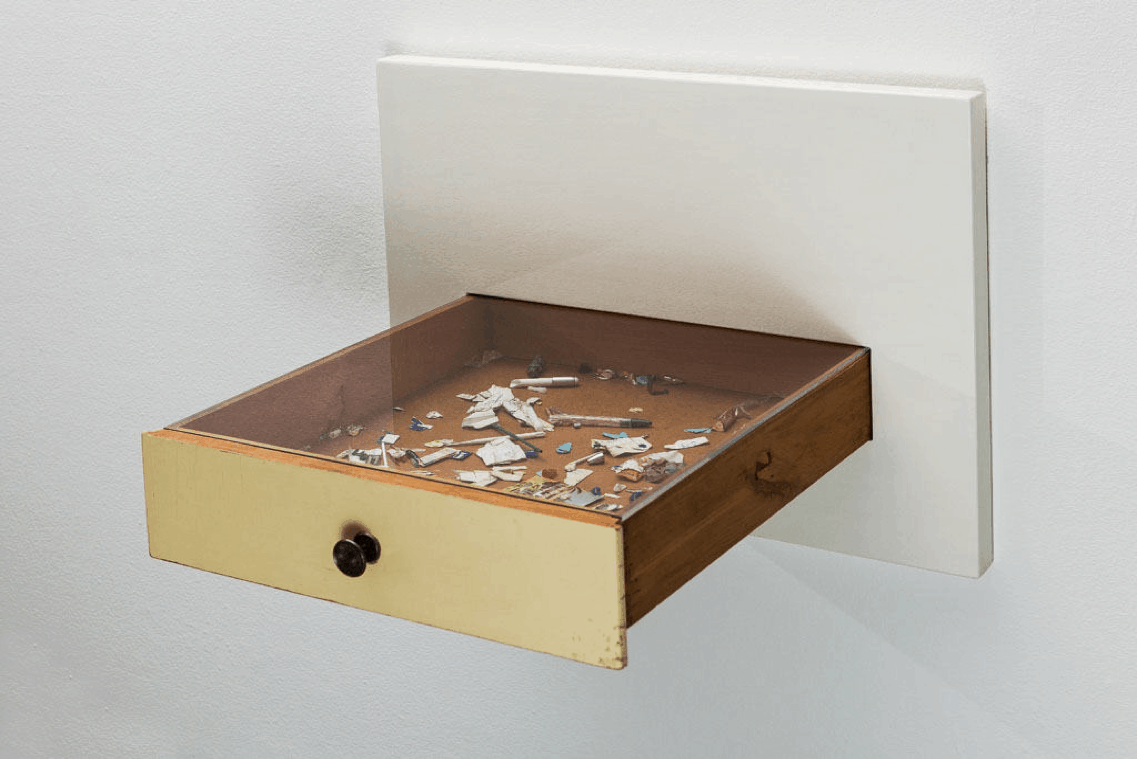 Drawer of the Enthusiast (2012) Installation.