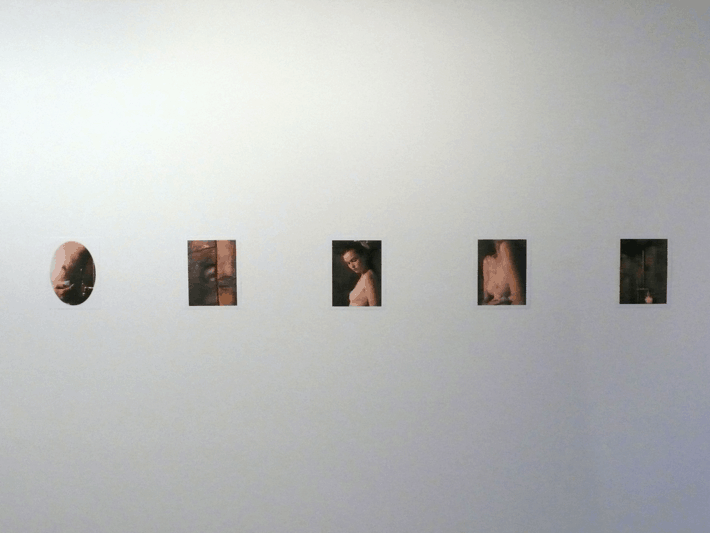 Roe Ethridge’s photographs have always had a sense of allure for the viewer, enticing the eye into their subverted layers and subtle misalignments, demanding a second, and if not a third look. He proudly declares: “When I am shooting, I start with an intention”[1], fully aware that his hallmark irony is constantly present and will always be subtly disrupting the visual harmony. With this irony in mind, he presents the series of photographs titled, Paradis (2010), which are proudly part of the Adrastus Collection.

Meaning paradise, heaven, or the highest circle of the gods, Paradis (2010) presents a series of erotic images of a young woman in the shower in three out of the five images. The remaining two portray a wooden shower frame with a hole for peering. The title of the piece may well be referring to the body, particularly the woman’s almost goddess-like breasts with pale skin and romantic framing, which are of focus in the work. Simultaneously, the title might suggest that the male gaze has found a paradise in the spectacle of the female body discovered through the peephole. Whatever the case, Ethridge’s humorous story-telling approach display signs of his mischievous personality through his photography. 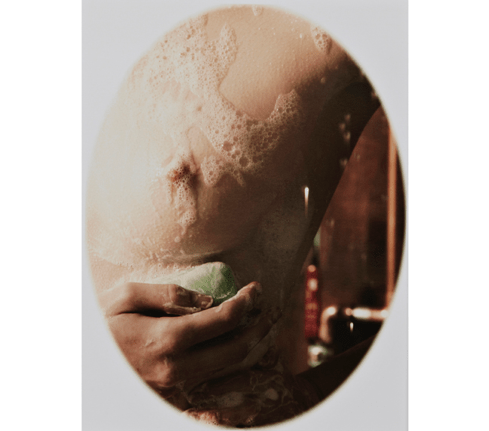 In stark contrast to this mischievous side Ethridge has described his first experience of shooting nude females, with the work, Myla with Column (2008), “This was, I believe, the first time I’d done a nude shoot for real – and not just a wife or girlfriend. So it was one of these things where we were putting out our feelers to see who we could convince to take off their clothes. We ultimately chose Myla [DalBesio] because she seemed self-assured and in control with what she’s doing. She also has this physicality that also reminds me of a [Henri] Matisse, you know, she’s got something to look at and to articulate as a subject was something that interested me. When we got there and started taking pictures, I was all sweaty and nervous, and I realized she was all sweaty and nervous, too, so I said, ‘Don’t worry, I’ve never done this before,’ and she was like, ‘Me neither.’ So, it was pretty awkward and funny.”[2] The American photographer not only displays his nativity and innocence in this commentary, but also shows how quickly he learned from the initial experience, moving into more subversive techniques in his photography. Only a few years later, he was heralded by the New York Magazine, who described him as: “a recognizable force in the fine art world with his serene but subversive portraits, still life’s, and landscapes”[3].

According to the curators of the MoMA they have described his work as: “pictures that acquire their meaning from the salient way in which they have been shuffled, sequenced, and laid out in nonlinear narrative structures”.[4] This is replicated in the series of fives images here as they work in unison to tell a story of one man’s paradise. The images he projects are simultaneously generic and intimate, blurring the lines that separate the two, whilst treading between humor and cynicism. Functioning in tandem, these motivations coalesce into an ongoing investigation into the mechanics of photographs. Paradis (2010) demonstrates this ability to both recreate a personal narrative, and yet at the same time, expand a relay of collective experiences.

Born in Miami, Florida, in 1969, Roe Ethridge grew up in the Atlanta, Georgia area. He attended Florida State University and graduated with a BFA in Photography from the Atlanta College of Art. In 1997 he moved to New York City and started his commercial photography career, over time providing catalog images, editorial and fashion shots, and working for publications including New York Times Magazine, Allure, Spin, Vice and Wired. The same year he moved, he also had his first solo exhibition, in Zurich, Switzerland, and participated in the Atlanta Biennial, held at the Nexus Contemporary Art Center. By the 2011 Deutsche Börse Photography Prize competition, the Jury advanced him to the four finalists. Drawing upon the descriptive power of photography and the ease with which it can be accessed, duplicated, and recombined, the artist orchestrates visual fugues, juxtaposing. His practice is singular in its ability to seamlessly transition between commissions for clients such as Balenciaga, and fine art exhibitions such as his recent show at Museum of Modern Art, New York. Ethridge’s work has shown extensively in the United States and internationally. He was recently included in the New Photography show at the MoMA and recently shortlisted for the Deutsche‐Boerse Prize for Photography. Other solo exhibitions include Shelter Island, FOAM, Amsterdam, 2016 and Le Consortium, Dijon, 2012, traveled to Museum Leuven, Leuven, 2012. Ethridge has additionally participated in numerous group exhibitions including The Poetics of Place: Contemporary Photographs from the Met Collection, Metropolitan Museum of Art, New York, 2016, Human Interest: Portraits from the Whitney’s Collection, Whitney Museum of American Art, New York, 2016, Perfect Likeness: Photography and Composition, Hammer Museum, Los Angeles, 2015, The 2013 Lyon Biennale, Lyon, The Anxiety of Photography, Aspen Art Museum, Aspen, 2012, New Photography 2010: Roe Ethridge, Elad Lassry, Alex Prager, Amanda Ross- Ho, Museum of Modern Art, New York, and the 2008 Whitney Biennial, among others.