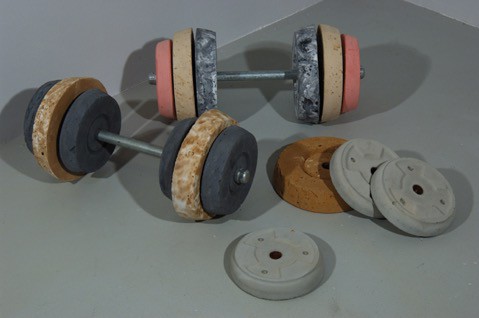 Since emerging from the Cuban avant-garde in the late 1980s, Quisqueya Henríquez has attracted international attention for her masterly ability to endow the quotidian under the spotlight. Whether a street encounter or the most personal corners of daily life, she has continuously created a new, wry, and layered meaning to each one of her complex works.[1] Surprisingly, Henríquez still remains little known in the United States. Henríquez’s imagery and sculptures alike incorporate properties of light, color, geometry, movement, water, wind and weight simultaneously. Her use of natural and industrial materials within her sculpture as well as natural and architectural environments, create situations that are less about their look and more about the experience they create for the viewers. The Adrastus Collection is proud to present B306 (2006) and Pesas caseras (Homemade weights) (2006) to explain this coinciding experience present in both works. 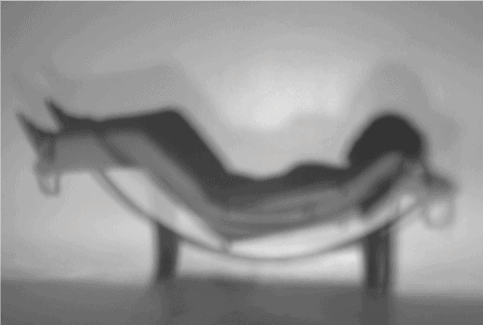 At the Miami Art Museum (MAM) Quisqueya Henríquez’s work was presented in the exhibition ‘The World Outside, A Survey Exhibition 1991 – 2007’, which was the first major survey of this Cuban-Dominican artist’s work in the United States that took place between April 25-July 20, 2008. The guest Curator Amy Rosenblum Martin explained, “Through her work, she invokes the sights, sounds, tastes, and textures of the city—all the sensory experiences that make urban life chaotic and provocative. By playfully abstracting familiar forms, she challenges our relationship with the everyday. Her primary concern is making us aware of our perceptions; with allowing us to see ourselves seeing.”[2] B306 (2006) can be seen to be enhancing this concern, visualizing a figure reclining on a semi-circular sofa, perhaps resting after a tiring day at the office. Quisqueya Henríquez’s B306 (2006) is based on a photograph of the designer Charlotte Perriand sitting on her now-iconic modernist chaise longue, B306, which she designed in the late 1920s.[3] In the original photograph, the designer reclines in the chair with her outline cast in shadow behind her. Henríquez presents a similar format but as a self-portrait that only shows the dramatic shadow and hides her face. The work plays on what she has previously discussed as “the assumption that Modernism in Latin America was a mere shadow of European Modernism.”[4]

Henríquez body of work ranges across media, using sculpture, collage, photography, video, and sound to explore the relationship between the “high” modern art of Europe and the United States and the art of Latin America. This is further explored in Pesas caseras (Homemade weights) (2006), artwork made in the same year of 2006 as B306 (2006). The sculpture presents two hand-held gym weights that have natural pigmented coloring to them rather than the standardized grey toning usually found in gyms. Henríquez takes inspiration from situations that present a challenge and even some degree of constraint, such as the concept of a gym and the awareness on weight loss. This approach has been taken from multiple perspectives as the artist explains, “You don’t have something, but you can’t stop and you won’t stop just because you don’t have it. You find a way to have it.”[5] The multifaceted works that were on view during this show exhibit how Henríquez employs her sharp sense of humor and acute sensitivity to the struggles and ironies of everyday life to break down the barriers between experimental art and popular culture. The curator of the show Rosenblum-Martin says: “Although Quisqueya has been described as a neo-Dadaist, her true fascination seems to lie with how a process or activity can become a work of art and how audience participation can give work meaning. She spins clichés into fresh paradigms.”[6]

Quisqueya Henríquez was born in Havana, Cuba in 1966. She studied at the Instituto Superior de Arte (ISA) in Havana and the Universidad Autonoma de Santo Domingo. The artist’s first name is the indigenous name given to Santo Domingo before the coming of the Spanish. Henríquez was a Miami resident from 1993-1997, a period in which she frequently worked collaboratively with Cuban-American artist Consuelo Castañeda, another graduate of Havana’s Instituto Superior de Arte (ISA). Quisqueya has been featured in solo exhibitions at Artists Space, New York; the Mattress Factory, Pittsburgh; Museo Rufino Tamayo, Mexico City; and The Contemporary Museum, Baltimore. She has also been included in many international exhibitions and biennials, including 23 Bienal Nacional, Santo Domingo (2005); INSITE 97, San Diego (1997); and several groundbreaking group shows, such as Defining the Nineties: Consensus-making in New York, Miami, and Los Angeles at the Museum of Contemporary Art, North Miami; Miami: Human Nature, at the New Museum of Contemporary Art, New York; No Lo Llames Performance at El Museo del Barrio, New York; Island Nations: New Art from Cuba, the Dominican Republic, Puerto Rico, and the Diaspora at the RISD Museum of Art, Providence; This Skin I’m In: Contemporary Dominican Art from the Permanent Collection, El Museo del Barrio, New York.