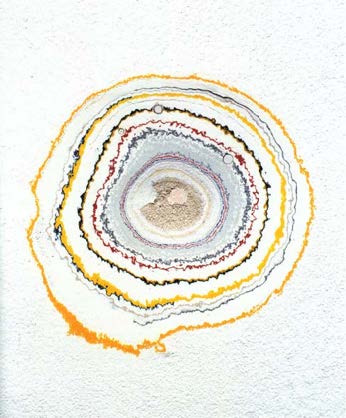 Pierre Huyghe is one of the best young artists on the contemporary international art stage. This fame is tied specifically to the installations, films, collective projects and performances, which he has been involved in since the beginning of the 1990’s. His works interrogate the collective imagination and the narrative structures through which it operates.

The white walls of contemporary art galleries are meant to look timeless, but, as Pierre Huyghe’s Timekeeper shows, there is a lot of history just beneath the surface. Huyghe brings that history into view by gently sandpapering the wall, revealing layers of paint underneath.

Like a geological cross-section, the history of the exhibition’s space is revealed by Timekeeper, because it uncovers and shows the successive layers left behind by previous actions –wall paintings-. This Adrastus Collection’s artwork reveals time and space in a single unit, allowing different artists to coexist as a kind of retrospective.

A paradigmatic example of Pierre Huyghe’s investigation of exhibitions as time-based experiences, the Timekeeper project began in 1999 with a site-specific wall installation made for the artist’s solo exhibition Le process du temps libre at the Vienna Secession (April 28 – June 6, 1999)- The Hauptraum in the Vienna Secession is known as the first “white cube” gallery space. For this work, which only existed for the duration of the exhibition, Huyghe sanded down a 20 cm eye-level section of white wall in the exhibition space to uncover the layers of paint left by previous exhibitions. By using an electrical circular sander, the older coats of paint were revealed in colorful concentric rings, reminiscent of the growth rings in a tree. The work effectively became a portrait of the institution’s activities: on the shallower outside of the sanded-down circular area more recently painted layers could be seen, while the paint revealed further down at the center had been covered by the longest.

Huyghe made a foil transfer print edition of this work, entitled Timekeeper, Wiener Seccession, 28.04.199, Scale 1 (1999). This print was subsequently included in his solo exhibition Pierre Huyghe: Some Negotiations at Kunstverein Munchen in Munich (October 10 – November 21, 1999) presented affixed to the wall as an architectural intervention, which in effect, supplanted the history of one institution onto another. This project was later revisited in 2009 for the group exhibition The Quick and the Dead at the Walker Art Center in Minneapolis (April 25 – September 27, 2009), where Huyghe created a Timekeeper wall installation. 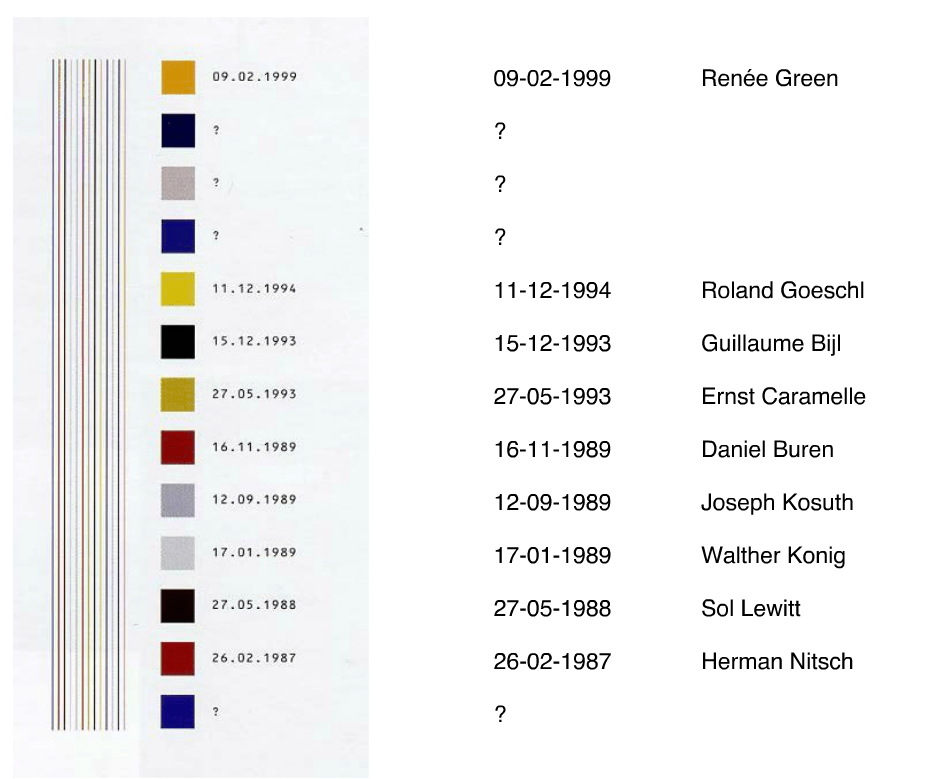 Chart of chronology of the Vienna Secession’s Exhibition history as evidenced through the layers of the wall paint revealed by Huyghe’s wall sanding.

On the occasion of Pierre Huyghe, the artist’s critically acclaimed solo exhibition that travelled to three international museums from 2013-2015 (Centre Pompidou, Paris; Museum Ludwing, Cologne; and the Los Angeles County Museum of Art) the Timekeeper project began to take on a permanent sculptural form. Huyghe created sanded wall installations at each venue, but at museum Ludwing, he physically removed a 60 cm diameter section of the museum’s wall around the sanded-down area after the exhibition closed, creating the sculpture Timekeeper, Ludwing, 2014. 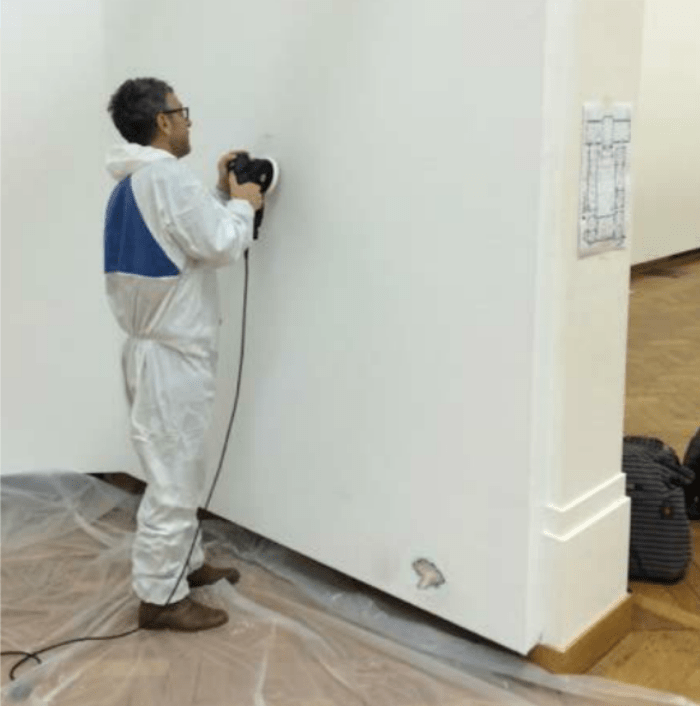 Pierre Huyghe was born in Paris, France in 1962. He studied at Ecole Nationale Supérieure des Arts Décoratifs in Paris from 1982 – 1985. He has received many awards, including the Solomon R. Guggenheim Museum’s Hugo Boss Prize (2002); the Special Award from the Jury of the Venice Biennial (2001); and a Deutscher Akademischer Austausch Dienst (DAAD) Fellowship (1999–2000). Huyghe has had solo exhibitions at Tate Modern, London, and ARC, Musée d’art Moderne de la Ville de Paris (2006); Carpenter Center, Harvard University, Cambridge, Massachusetts (2004); Modern Art Museum of Fort Worth (2004); Dia Center for the Arts, New York (2003); Solomon R. Guggenheim Museum, New York (2003); Museum of Contemporary Art, Chicago (2000); and Centre Georges Pompidou, Paris (2000). The Public Art Fund commissioned Huyghe to create A Journey that Wasn’t (2006), which included an expedition to Antarctica, a performance in Central Park, and a video installation at the Whitney Biennial in New York. Huyghe lives and works in Paris and New York.