Pawel Althamer: The Interpretation of Identity 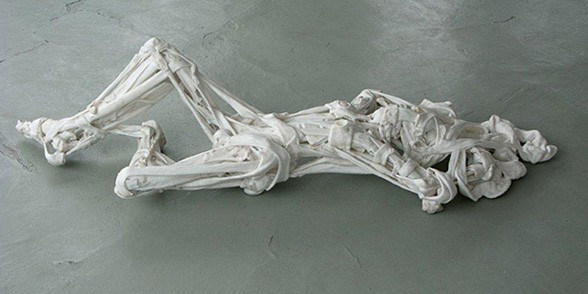 The primitive, archetypical interpretation of identity is something that has always fascinated Pawel Althamer and his themes of alienation and isolation are a continual presence in his work. Continually searching for his own form of identity, the artist has experimented with drugs and mediums in a search for understanding. Frequently referring to his life as a ‘journey’[1] there is a depth and relatability to his work, which allows it to communicate easily to an audience.

Almost taking on a shamanic role, Althamer believes that what happens on a spiritual or mental level should be communicated and announced as either a warning or as adhesion to the experiences in life.  Expressed here as the artist himself makes comment,

“It is all about communication here. Whatever happens inside of you can be communicated to other members of the tribe. This is a very strong need to announce my own discoveries, internal experiences, to the rest of the tribe. Just like a prairie dog telling the whole pack that it has seen a predator. Or a tree, apparently communicating in a way with other plants and warning them during a forest fire.”[2]

The themes of spirituality and mysticism become noticeable to Althamer’s work as many of these sculptures stand in a suspended realm as if “like idols of a forgotten civilization.”[3] Althamer made Venetians (2013) for the 55th Venice Biennale for what can be seen as an exploration for a deeper realm as he casts the faces and hands of fifty people from different backgrounds. His hieratic casting of these figures with the draped like plastic as if it were muscle fibre is an extended study to Homage to Sylwia. Creating a parallel reality in the exhibition space, he questions the reality we accept and encourages a deeper form of existing. 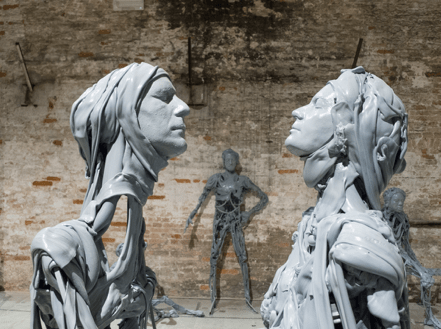 Homage to Sylwia (2011) marks the culmination of Althamer’s interests in social engagement and sculpture. With a gesture of exposure, he fabricates a seemingly human corpse, stripped of his clothes, unveiling the literal strips of painted white plastic material underneath.  The theme of exposure creates an ominous presence that lingers, as even the stance of the figure, trying to hide his face, suggests a more sinister side of social engagement amongst humans.

The Edenic state has been disrupted and sense of psychosis and is erupting from the figure. Similar to the project Almech (2011–12) that was commissioned by the Deutsche Guggenheim the white ghostly figures seem to lure the viewer to come and inspect the figure in an almost seductive manner.[4] Althamer aims the public to interact with the sculpture, but the experience of seeing real people interacting with these ghost-like works creates an eerie tension.  The artist has encapsulated human movement, retaining it in his sculptures, like a sort of entrapment in plastic. It is this tangible activity that the artist is construing in the material that charges the sculptures with this ominous energy.[5] 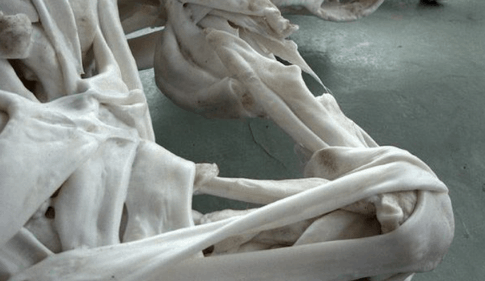 By not giving this particular figure a face, as seen in other similar sculptures such as Almech (2011-12), which could be described as portraits and representing “an individual whose boundaries shift between engagement, influence, history, community and constant learning.”[6] Althamer plays with his sense of identity, aware of his position as an artist and guide, and thus distanced from the myth of the isolated artist. Even his self-portraits avoid celebrating an obtuse, self-absorbed artist. By this means, with the social interaction being at the centre of his work one can assume that this sculpture was the artist playing with ways of presenting himself.

Althamer studied at the Warsaw Academy of Fine Arts between 1988-1993, earning a degree in sculpture under Prof Grzegorz Kowalski. In 1991, he began exhibiting his works, along with colleagues from the Kowalski studio, including Katarzyna Kozyra, Jacek Markiewicz and Jacek Adamas. He was a co-founder of the Kowalnia (“Smithy”) group, a leading collective of young Polish artists in the 1990s. In 2004, Althamer received the prestigious Vincent Van Gogh Biannual Award, founded by the Broere Charitable Foundation of the Netherlands.

His approach is a testament to the artists who have influenced him such as Joseph Beuys and the teachings of Polish sculptor Grzegorz Kowalski at the Warsaw Academy of Fine Arts. His work has been featured in several important group shows as well, including the Istanbul Biennial (2005); Berlin Biennial (2006); and Skulptur Projekte Münster (2007). Althamer has had solo exhibitions at the Westfälischer Kunstverein, Munster, Germany (2002); Foksal Gallery Foundation, Warsaw (2004); Musée National d’Art Moderne, Centre Georges Pompidou, Paris (2006); Fondazione Nicola Trussardi, Milan (2007); Secession, Vienna (2009); and New Museum of Contemporary Art, New York (2014); ATE Museo Mario Testino, Lima, Peru  (2015) and Bellas Artes Projects, Manilla, Philippines (2018). He lives and works in Warsaw.

[1] Pawel Althamer in conversation with Sebastian Cichocki, Restraint while travelling  from the talk, which was published in full in the book called “Positionen V: Polen” in Steidl: Spring/summer 2011. Gottingen: Steidl, 2011. Print.