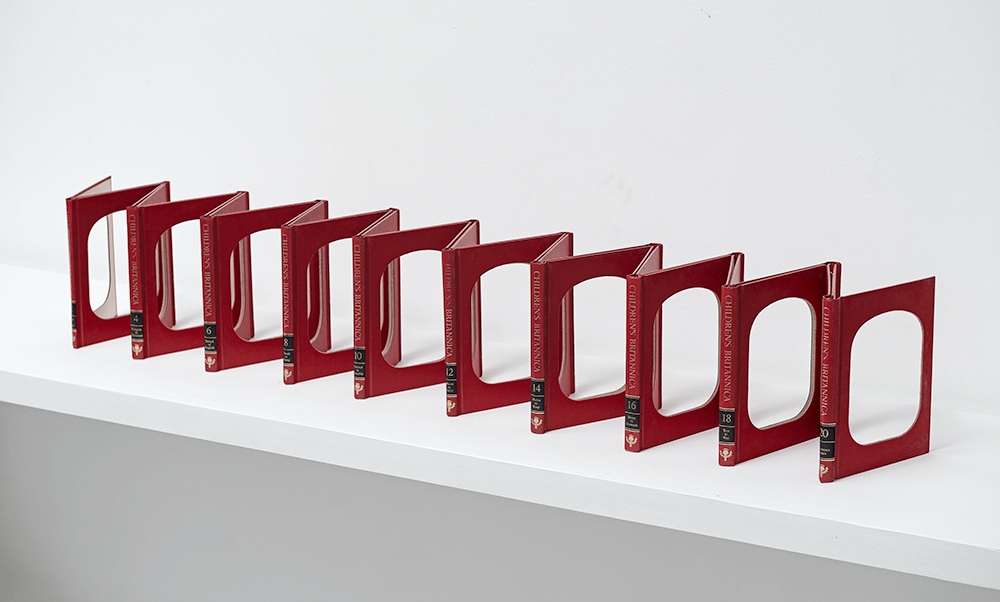 Odires Mlászho is an artist of transformation. Not simple decontextualization of objects, but actually deep transformation of images, words and objects. Intimately connected to photography, literature and poetry, his creations expand society’s limited categorization habits by either destroying or transforming them in order to revive forgotten images, books, pictures and typography in order to gain new life from a completely different perspective.

Within his body of work, objects become photographs, texts transform into images, and books are sculptures: nothing remains in its original place in the world. Throughout his work, the artist proves that things are not such as defined in the way we tend to believe and that after the destruction of objects, these can be re-created and reused in a total different way. His work offers us the possibility of entering a world with a completely new kind of perception: it is our world, all the original elements are there, but this world is truly and deeply transformed.

Born in 1960, Mlászho has also considered being an inventor, since each of his new series come with a new technique. That is to say, in every work he creates a different way of transforming raw material, from cutting techniques to the so-called exfoliation of images. Even, his name is the first sign of his transformational character. Born José Odires Micowski, he decided to merge the name of two of his influences when he started working as an artist, Max Ernst and László Moholy-Nagy, into a new family name: Mlászho. This anagram indicates the twist he takes on these historic artists’ use of photomontage.

This Brazilian artist initiated his path in the contemporary art field through literature. He initially wanted to be a poet, and his first pieces were poems; however, as one could predict, these were not regular pieces, but what he calls “elastic poems”. This new literature structures contained invented words that, when read aloud sounded almost like a mantra.

The appropriation of pictures forgotten or hidden in dusty old books and their reconstruction—in such a way as to engineer anachronic encounters—are central to Mlászho’s poetics. With the book as his main object of manipulation, the artist transforms encyclopedias, photo spreads, works of journalism, and botanical compendiums into book-sculptures.

Mlászho’s altered books are a logical extension of his collages, which experiment with techniques of cutting and transferring images from albums, manuals, and antique books. The aritst bends, twists, and interweaves encyclopedias and handbooks to create arcane objects. The volume, as bound paper, is recast as a volumetric thing. 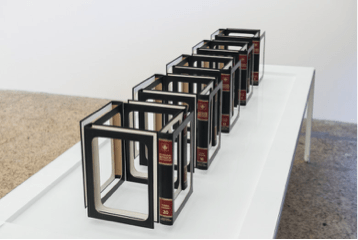 Constructed from several copies of the Enciclopedia Britannica from the series Livros Esqueletos (2014) the artist cropped with graphic knife the book covers of the British Encyclopedia for Children. In this artpiece, massive volumes of Brittanica encyclopaedias have been disfigured, altered and transformed into new book-sculptures. Mlászho unpacks the constructed nature of photogenic reality and draws out attention to the paradoxical structure of language. In Britannica from the series Livros Esqueletos (2014), the artist opens up an epistemological investigation by revealing the internal structure of knowledge.

In Britannica from the series Livros Esqueletos (2014), Mlászho does not deliver books from materiality but cedes their materiality as objects. Thus, in this art piece, the artist aims to expand the language of collage into three dimensions. Odires Mlászho interferes directly on the constituent architecture of books, creating holes, scars and graphic cutouts that can be read as ideal packages for the artist’s own language.