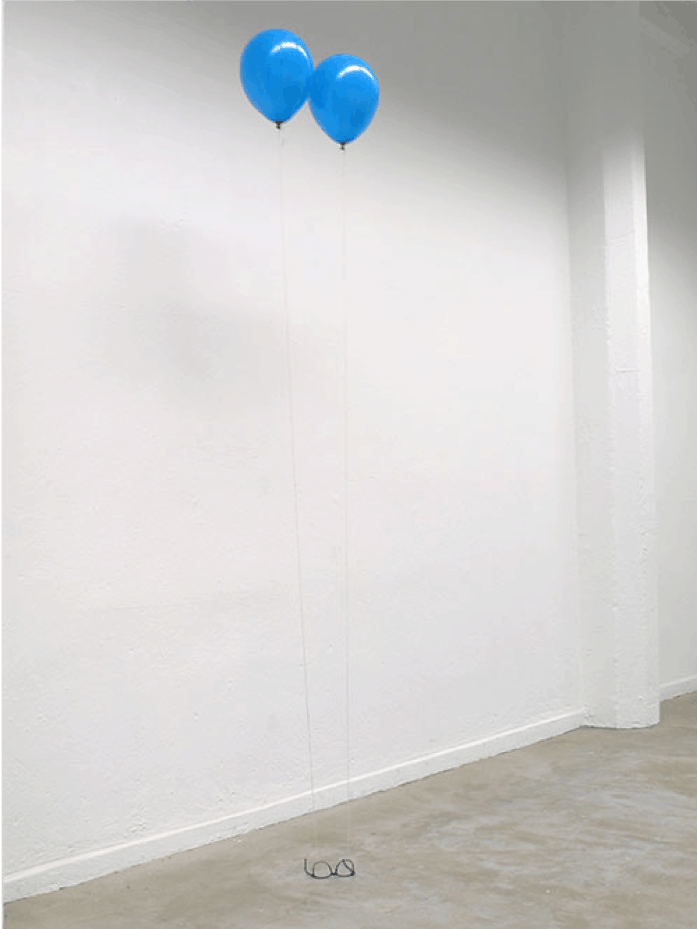 The artistic production of Nicolás Bacal is based around the use of everyday objects and focuses the orbits of each artwork around every viewer that it comes into contact with. The Argentinian artist depends on systems of mediation when it comes to reflecting on his work as he makes the viewer rethink topics such as fragility, through his sculptural object art. Hence, Bacal challenges and creates new ways of understanding through the materialization of his sculptural mechanisms. The work, Untitled (2010), part of the Adrastus Collection, represents a cumbersome depiction of a pair of glasses that encounters the irony in an otherwise commonplace apparatus.

As a fragile sculpture, Untitled (2010) is composed of two blue helium balloons tied to the sides of a pair of glasses. Firmly rooting its delicate nature as it lies on the floor, the fragility of the eyeglasses is being guarded by two helium balloons attached to it with a string. The work demands the human presence to create a connection to the piece, converting the spectator into the thin interconnector between the balloon and the glasses. This is reinforced by the work’s dependency to be maintained by the gallery staff, who have to give the balloons daily inflation. The two conjoint objects connected by the common thread and the theme of fragility becomes the critical focus of the piece. Bacal describes the thought process behind his work as the following,

“I consider my samples to be species of small cosmologies of ideas; they are then assembled, following very precise orbits that cause zones and cycles of greater or lesser gravitational attraction. I always try to have something overflowing within these cosmological systems, like a black hole. I think my work always focused on trying to stop the passage of time or, at least, apprehend it, confining it in pieces or songs. I like the works that allow one, after having contemplated them, to return to their home and rebuild them in a domestic way.”[1]

Simple at first sight, Bacal’s body of work is actually very complex as he explores the evolution of human sentiments through time and their material form. In the referred artwork, Untitled (2010), the pair of glasses is used to provide this inquisitive question and informs the viewer of its vestige from a previous relationship.  In addition, the reflective surface of the balloon transforms every environment where the artwork is placed, as it reflects the other items in the room: other works of art, or common day objects that might be present, such room lighting or environmental controls. This simple work is an expression of an almost impossibly hard intent of grasping concepts through their physical fragility, ephemeral condition or embodied struggle. Bacal’s intentionality aims to define the notion of grasping topics of everyday life, repeatedly referring to the concepts in various shows such as a the recent ‘Thermal Time’ (2018)[2], which was intended as a register of the passing of time.

Nicolás Bacal (Buenos Aires, 1985) is a musician and visual artist. Despite he graduated in electroacoustic composition from the National University of Quilmes, he has done several workshops and training programs in visual arts at the Fundación Telefónica and Centro Cultural Rojas. He has been a fellow of the Artistic Research Center (2009), of the Artists Program of the Torcuato Di Tella University (2012) and of the Skowhegan School of Painting and Sculpture in Maine, United States (2014). He has had solo exhibitions in Buenos Aires (Alberto Sendros Gallery – 2008, 2010 and 2012), Paris (JTM Gallery – 2009 and Gb Agency Gallery in 2013) and in Sao Paulo (Vermelho Gallery 2013). In 2011, he participated in the 12th Istanbul Biennial and the 9th Mercosur Biennial in 2013. He has participated in various group exhibitions and received recognition from a number of organizations, outstanding amongst which are the Mamba-Fundación Telefónica (2006), MacStation Paradigma Digital (2007), selection for the Fundación Klemm award (2007 and 2009), and third prize in the projects category of Mamba-Fundación Telefónica (2009). As a musician, he has been part of the experimental pop life project, with whom he released an album in 2007 under the German label Monika Enterprise. Nicolás lives and works in Buenos Aires.