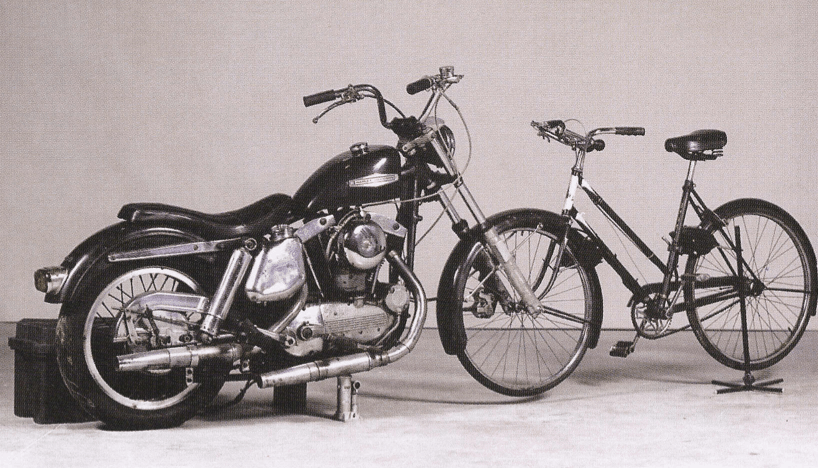 Robert Chambers is known for his forward-minded, original talents.[1] His artistic production over the years has used an astonishing array of materials, ranging from abandoned machine parts to a helicopter. He finds himself constantly juggling visual representation and connecting the realms between science and art, forcing them into a realm of senselessness and chaos. However, it is this experimental playfulness in sculptures that leads the viewer into a much-needed mediation of the previous purpose of these objects. His flexible approach is used to oblige the viewer to contemplate the background knowledge of the material and the object itself, proposing a futuristic premise.

Such thesis is identified in the work, MotoShag (2000), part of the Adrastus Collection. The art object consists of materials of a 1989 Harley Davidson, 1989 Raleigh, electrical components and aluminum. The structure manipulates the two previously used vehicles of a motorbike and bicycle; placing them directly in front of each other so they both share the same front wheel. In this wheel interconnection, the viewers are reminded of the title, and assume that the intercourse of these two disparate objects may deliver new ways of understanding movement, combing the motorized and the pedal-driven vehicles.

Robert Chambers explains his use of the joint sculptures in the following interview: “The idea of combining contemporary sculpture and science with non-traditional materials is at the core of my work as an artist. My work very often references a sense of experimental playfulness. The rigidity of science, chemistry and physics is broken by a desire to re-contextualize empirical research through a sculptor’s vantage point. The final selection of unrelated matter becomes a perplexing hybrid of materials and concepts rooted in laboratory praxis and contemporary art theory. I find myself constantly toying with visual connections between science and art, forcing them into a realm of senselessness and chaos. This work stimulates viewers into constructing their own understanding of contemporary concerns and questions, which may be used as an impetus to encourage associations between disparate entities.”[2]

Son of an artist mother and a molecular scientist father, Chamber’s scientific motifs in his sculptures can only be seen as a natural progression. However, it is his challenging of the unnatural dichotomies that has always drawn the critics’ attention. His consistent use of man-made objects such as motorbikes and bicycles demands to question for these objects. In the case of MotoShag (2000), the artist highlights the use of the wheel, an item that has been considered an icon for human scientific innovation. The persistent questioning that has led humankind to the advanced stages that we find ourselves in today suggest that it is the imagination of the artist that will lead us to further inventions to think onward.

Robert Chambers was born in Miami, in 1958. He earned his MA (1990) from New York University and his BFA from University of Miami (1983). He ran the sculpture departments at NYU for a number of years and then continued his teaching career at the University of Miami. Robert Chambers completed several large scale public Art commissions; Light Field, an interactive 87’ tall LED wall of light and Orbital 1+2, 20,000 lb. marble elliptical sculptures for Miami-Dade Art in Public Places (completed March 2011). Recent exhibitions include 2011 Invitational Exhibition of Visual Arts at the American Academy of Arts; Letters in New York; 2011“Adaptive Silo” , Projektraum M54. Mörsbergerstrasse 54, Basel, Switzerland; 2009 “Ribbon Drop on Arch St”, Fabric Workshop Museum, Philadelphia, PA; 2008 “Atomic Dog”, Winter Park, Florida. Awards include the Nancy Graves Award and the Louis Comfort Tiffany Award. He was granted a residency at the Fabric Workshop Museum in Philadelphia, PA in 2009 and has work in the permanent collections of the Museum of Modern Art in New York City, Miami Art Museum and the Museum of Contemporary Art of Miami, Florida.