Working across various media, including painting, sculpture, film, video, audio, and design, Holmqvist has, for the past thirty years, traversed a path that explores the possibilities of language—written, aural, spoken, and beyond. Steeped in a long-time interest in concrete poetry and the promise it holds for the reinvention of language, Holmqvist’s poems address social, political, and cultural concerns from a critical position. His body of work has been inspired by Adam Phillips. The British psychoanalyst and essayist had stated that poetry’s distinction from the arts is its lack of market value. By placing his poems into canvases, Holmqvist tries to mitigate the market’s oppression of the artwork through the poetry’s autonomy.

The unique poetic perspective of Karl Holmqvist as a visual artist fills the space with intangible material such as words or sentences to trigger a reaction in the viewer. Just like the activation of an image is capable of provoking thoughts, Holmqvist seems to be reminding us that words can, in turn, generate images. A poignant example in this sense is a square-based sculpture carpeted with the word “ASS” in Adrastus Collection’s most recent acquisition, Untitled (Big Ass Painting) (2015).

The Swedish artist’s relationship with English as his second language continuously varies in intensity and meaning. Words and sentences can be fragmented or decontextualized, taking inspiration from both highbrow and mundane sources, being the second in Untitled (Big Ass Painting) (2015). The big block of text generated by the constant repetition of the word “ASS” dilutes the unorthodox meaning of the word and even transforms it into new connotations when read as “SASS”. However, the mechanical repetition in Untitled (Big Ass Painting) (2015) is broken by nine aluminum buttons placed on the canvas with the word “BAD” written in bold black uppercase letters, which are perfectly distributed every three lines of text. This feature has also been presented in other artworks from the 2015 series.

Holmqvist’s poetic explorations of communications and language are hardly ground-breaking if viewed within a history-of-art framework if we consider Barbara Krueger’s catchlines or Baldessari’s word paintings of the late 1960s and early 1970s are a case in point. However, Holmqvist’s artworks are experimental within their own parameters, and above all, compelling in their own right.

Following a long tradition of wording as part of a visual composition of Holmqvist is the postmodern legacy of the Futurist’s Visual Poems School (i.e., Apollinaire and Marinetti), the Dadaist poems (i.e., Tristan Tzara or Richard Hülsenbeck), and even the Concrete poetry in the ’60s (i.e., Max Bill and Öyving Fahlström). These artistic and poetic movements neglected painting and started to use words as a compositional element as images.

Born in 1964, Holmqvist’s recent one-person exhibitions include Centre d’Art Contemporaine, Geneva, Indipendenza, Rome (with Klara Liden), Kunstverein Braunschweig (with Klara Liden), Power Station, Dallas, and Camden Arts Centre, London. He has participated in the Venice Biennial in 2003 and 2011, and Performa, New York in 2005, 2007, and 2013. In 2013 he received the Arthur Köpke Memory Fund Award. 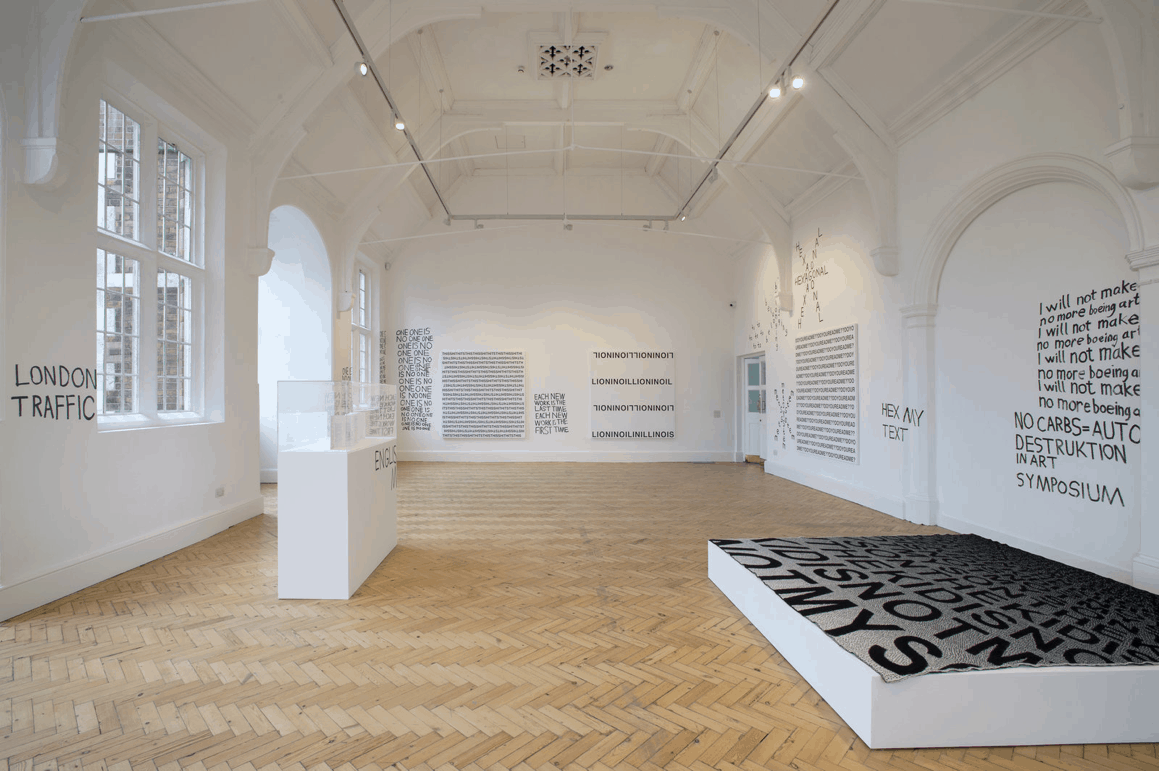