Manisha Gera Baswani: A Case of Homesickness since 1947 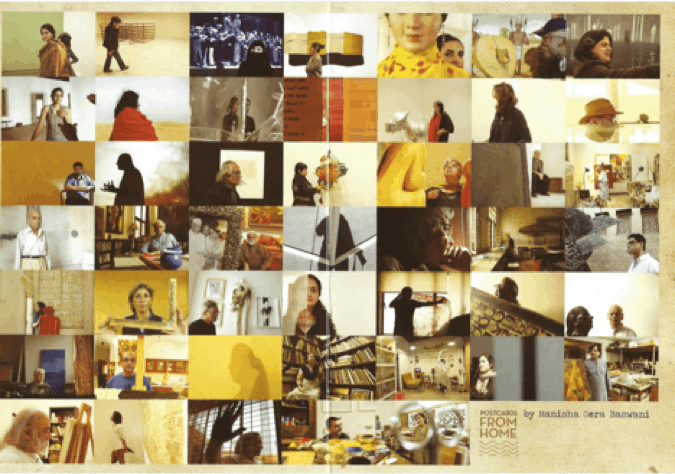 Manisha Gera Baswana was deeply inspired by her teacher, mentor and fellow artist A. Ramachandran who taught her at the Jamia Millia University while she was pursuing her Master’s Degree in Painting. During their sessions, Manish chose to document him with photography so that others might be able to understand his intrinsic nature. Her artworks, as well as her photographs, ultimately led to sites for conversations, inviting viewers into aspects of their visuality and their intimate environment, often transgressing boundaries to enter the realms of the intangible, taking art back into life from which it germinates.[1] The artist’s body of work unconsciously chooses to direct conversations that started around the exchange of thoughts and insights within an informal and unstructured environment, towards an uninterrupted flow of the artist’s mind, which is particularly visual within Adrastus Collection’s latest acquisition Postcards from Home (2017).

Eventually, I started photographing my artist friends and some even used these images for their show catalogues. It was all very organic and I just found myself enjoying the process so much. Invariably I used to be in their studios aphotographing them from under the table or from behind the chair, discovering fresh angles while at it. I believe that I was given such access and liberty mainly because I was a fellow artist although I remember that I became quite an irritant to some friends who would mutter “Gera phir se aa gayi” (“here comes Gera again”) every time they saw me![2]

Whilst discussing her choice of medium after her return from the Lahore Biennale by the India Art Fair, it becomes clear that this documentation has allowed her to explore a substantial repository of images featuring Indian and Pakistan artists. Postcards from Home (2017) can be considered to have its genesis from two parallel projects of photographing Indian and Pakistani artists in their studios, as well as her own identity as an artist.[3] She continues to open up within the interview, explaining that her parents were born in pre-partition Pakistan and her childhood was full of stories of their “home away from home”. She explains, “Seeing them age, I have somehow taken it upon myself to preserve the history that they lived and contribute to the stories that I grew up listening to. Every time I have crossed the border, something triggers in my heart. What that is, I cannot describe. To be honest, I feel that the people will forget about the war if the borders are opened.”[4]

This geographical shift for the artist clearly resonates with her emotionally and therefore can be a reason for her unconsciously choosing to document and explore shared memories of artists from these countries. She deliberately focused on 47 artists within the work to signify the importance of the year 1947, a year before the time of Partition of India and Pakistan. The artists herself clarifies this point, “There was never any bitterness in their stories, which is what I need to always stress upon. Despite the pain, my parents speak about it with love and longing for the home they had. That is where my project subconsciously began.”[5]

The work of Postcards from Home (2017) feature happy and sad stories,  of what happened to these artists during this time, printed on one side, with a photograph on the other. There are 47 stories and images within this work that were collected between January and March. The artist acts as a storyteller as she amasses accounts of love and longing among her fellow art communities of the two nations. Subsequently inspiring a cross border conversation and an archive that can now be preserved forever.  Baswani’s hopes to grow Postcards from Home (2017) by gathering more testimonies, “There are so many stories that need to be told,” she said. “I kept it to 47 artists keeping in mind the year of Partition, but it is possible to expand the project as I am getting to know more artists from both sides of the border who have a shared history.”[6]

[5] Chaudhuri, Zinnia Ray. “What Is Home? Indian and Pakistani Artists Explore the Question through Stories of Partition.” Scroll.in, , 24 May 2018, https://scroll.in/magazine/879362/what-is-home-indian-and-pakistani-artists-explore-the-question-through-stories-of-partition.