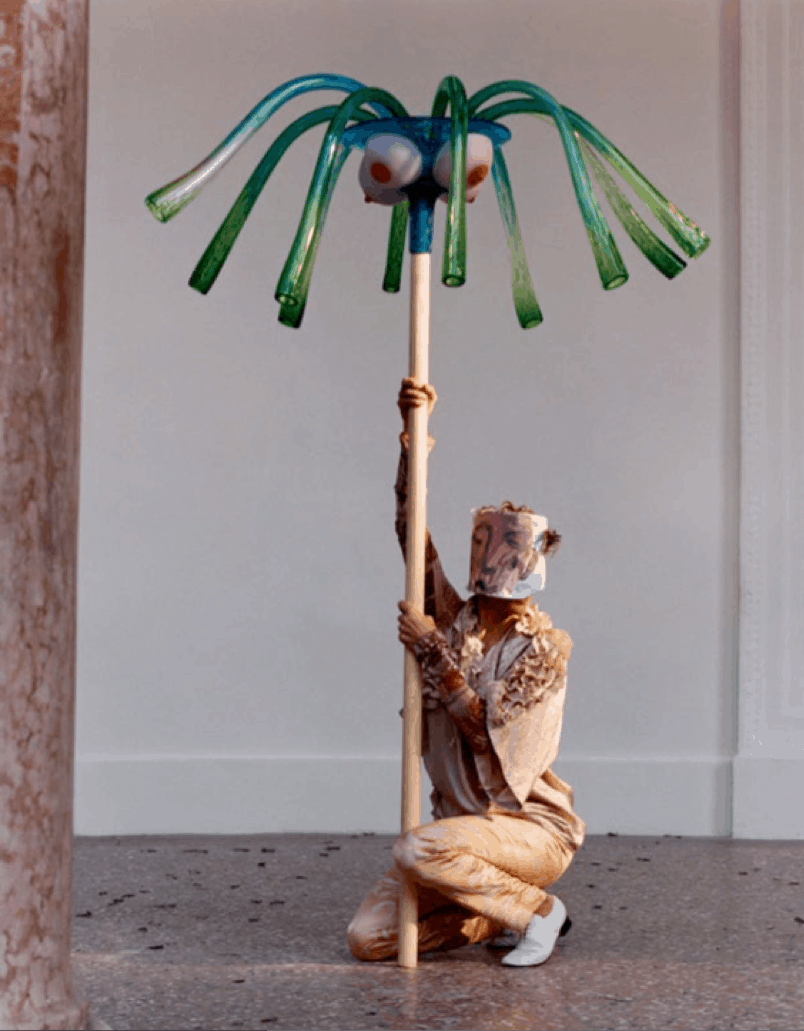 The world in which Laure Prouvost lives is full of fantasy and fables. She aims to reach her audience through her imitation of those fables. Some may perceive her work and recounting of these fables as lies, as she is frequently named “the trickster of the art world”. But what one can say with certainty, that she portrays a universal resonance, creating immersive installations and performances that delve into both fiction and reality. Prouvost typically combines a diverse range of media including performance, video and sculpture, which are frequently full of poetry and humor.

This year, the French artist was entrusted to be the representative of France’s pavilion and is now the third women to embody this role for such a historical site. Winner of the Max Mara Art Prize for Women in 2011 and the Turner Prize in 2013, her inspired pieces spark discussion and play on the enchanting nature of the world. She is renown for taking an intuitive and bodily approach to knowledge and drawing of the every day. Recently, she commented to Artnet News that,  “We need to question everything in history.” When asked about her feelings on the current political situation in Europe, “It’s an interesting moment. There are a lot of ideas and desires that we can hold on to, but there is a lot we can question and also re-invent.”[1] This note of optimism can be reinterpreted into her work as although she deals with controversially damaging topics, as she has the capacity to transcend into the mystical.

The project visualized in the Venice Biennale 2019 has the title, Deep See Blue Sur-Rounding You / Vois Ce Bleu Pro-Fond Te Fondre, and clearly makes a reference to our polluted oceans. The core of the pavilion includes a fictional journey from Paris to the city of Venice, and features twelve characters, including a rapper, a dancer, a flutist, a priest, a karate master, and a magician. Adrastus Collection’s latest acquisition Cooling system 6 (for global warming) (2019), is a performance that enriches and develops the themes in this installation of global warming and global conflict. Prouvost writes in a conversation with the pavilion’s curator, Martha Kirszenbaum,

“I had the idea of the octopus as a metaphor for the origins of our planet and, as human beings, for the development of our nervous systems. My project for the French Pavilion offers a metaphorical immersion into the stomach of a kind of an unknown tentacular animal, in order to find out who we are.”[2]

Cooling system 6 (for global warming) (2019), made in continuum of this idea, a performance of a figure dressed in a suit of neutral colour with Renaissance designs painted onto it. The figure remains anonymous as a mask is placed on top of their face, the mask watercolour painted with little features but recognizably a human face. This makes reference to the human responsibility and their pivotal role in the ‘Cooling System’ for the planet.

The artwork that the performer is holding onto is an umbrella shape structure with a long pole and tubes sprouting from the top.  A prominent feature of this work can be seen at the top of the shaft and below the green tube-like tentacles, large breasts with red nipples. The word ‘Boobs’ is a prominent word for Prouvost, in her show in Antwerp, which is called Am-Big-You-Us Legsicon, she released a dictionary-as-catalog that reads like a surrealist encyclopedia. In this encyclopedia, under each word she invited different authors to come up with new defnitions, genders, and histories for the words. Boobs are also often cropping up in her work, even signing the introduction of her book “All the very breast, Laure Prouvost.” [3]  In Cooling system 6 (for global warming) (2019), the breasts and tentacles seem to form part of a sprinkler system and a humorous fashion as water sprays through the many nipples, much like in her show Ring, Sing and Drink for Trespassing at the Palais de Tokyo.[4] 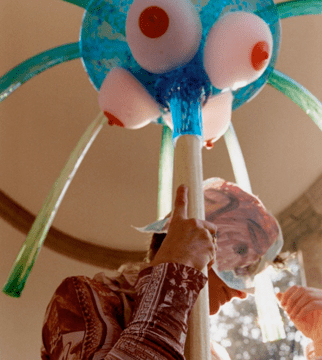 Octopus, is another word that can be found in the dictionary and as mentioned before it signals a metaphor for the planet.  “I like this metaphor,” she says “The octopus is the oldest mind or brain of this planet. With her arms, she’s touching and thinking many things at one time. And could it be where we all come from? The only thing the octopus doesn’t have is memory, so she cannot evolve so much. She cannot pass down knowledge.” With a laugh, she adds: “I also often forget things, so I can connect to that.” With many other words set to describe her show, as other surprises set to feature, it may be “breast” to just forget what you know and enjoy Prouvost’s enchanting works.