Farsa Goya (Fusilamientos del 3 de Mayo de 1808) and Farsa-Goya (Fusilamientos del 27 de Agosto de 1979) by Dora Longo are two representative artworks from the Adrastus Collection. Using a military truck rooftop as a canvas, the Brazilian artist reproduces well-known war-related artworks such as Picasso’s Guernica and Manet’s Execution of Emperor Maximilian. The artist recontextualizes old masters’ war paintings paired off with newspapers’ explicit photographs in an attempt to revitalize our sensitivity, which –we can only assume she would argue- has been seared due to our constant bombardment by violent images. On one hand, Dora Longo borrows and recreates in Farsa-Goya (Fusilamientos del 3 de Mayo de 1808) – Francisco Goya’s famous piece of a firing squadron shooting on the occupied enemy. In this artwork, Goya sought to commemorate the Spanish resistance to Napoleon’s armies during the occupation of 1808 in the Peninsular War. The original painting portrayed the suffering, hunger and death of thousands of his contemporaries during the brief, albeit scarring, invasion by Napoleonic France. The painting’s content, presentation, and emotional force secure its status as a groundbreaking, archetypal image of the horrors of war. 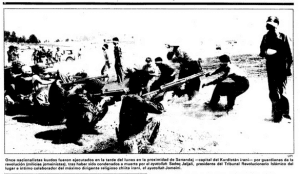 On the other hand, this art history’s iconic painting encounters a modern photojournalism picture that visually narrates the terror campaign issued by the Khomeini army, an Iranian military organization leaded by the revolutionary politician Ruhollah Khomeini that sought to overthrow the Pahlavi monarchy. In this image, a correspondent from the newspaper “El País” unveiled the massacre occurred during the Iranian Revolution in 1979, when this revolutionary group executed eleven Kurdish nationalists in Sanandaj. [1] Nevertheless, Dora Longo gave the same color palette treatment (green, white and black) as the Goya’s painting referred above, in order to elude the junction of both political atrocities. Besides the chromatic processing, in these artist’s appropriations, the “blood” stains leaking unto the gallery floor give the viewer the impression that the violence is very tangible; it has impacted not only the composition in the canvas, but forms part of the viewer’s present reality. Videlicet, the red stain parting form the canvas extrapolates these murderous images to our reality and alludes to our daily contact with graphically intense pictures and interrogates our posture towards them. These artworks are inspired by Susan Sontag, an American essayist who ponders about the effects of recreating the atrocities of war through an image. It is impossible to know whether the continued exposure to these representations of the horrors of war might lead to indignation or, conversely, to apathy.[2]