Widely known as the director of the 2014 Academy Award-winning best picture, “Twelve Years a Slave”, Steve McQueen specializes in finding the perfect medium for each of his ideas in order to transform the ubiquity of violence into the viewer’s personal revelatory process.

McQueen’s body of artwork is inspired by Susan Sontag’s book, “Regarding the Pain of Others.” Sontag explored the possibility that we do not respond empathetically to images of human suffering in our media-saturated world.[1] She argues that, “sometimes it takes a shocking image to bring to light our interdependency with others, where apprehension of the fragility of one’s life may open a pathway to empathy and compassion for the pain of others (although, of course, it risks having the opposite effect through naked self-preservation).”[2] In an entertainment culture that has only grown increasingly hospitable to violent diversions, McQueen’s preoccupation lies in our tendency to be detached from, immune to, and passive towards, others no matter how graphic real violence can be in our lives.

McQueen’s work has moved beyond an interrogation of the image’s effectiveness in its dialogue with the viewer to create empathy. This inquiry has been transformed as the artist’s responsibility. Thus, it is no surprise that McQueen seeks to apply into practice new radical aesthetic strategies, such as cinema or installation in the case of Remember Me, in order to generate an emphatic and caring emotion for the victim. 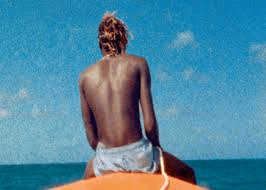 It is in this context that we find Marian Goodman Gallery”s show entitled Ashes. This exhibition is composed of two films projected simultaneously on either side of a screen. On one side, we see Ashes – the protagonist in his 2002 production of Carib’s Leap – sitting in a boat that is sailing the Caribbean Sea and playing up to the Super-8 camera following him. For a long time, Steve McQueen forgot about those few minutes of the film, until he returned to Granada in 2013, when he found out that Ashes was murdered following his discovery of a stash of drugs on a beach. Ashes’ carefree demeanor and apparent freedom stand in contrast to the content of the  second film projected on the other side of the screen presenting a Grenada cemetery.

When viewers emerge, literally by climbing the gallery’s set of stairs, from Ashes’ story, a neon wall installation confronts the visitors. Formed by 88 dark blue neon lights, each is a unique handwritten version of the phrase “Remember Me.” This installation deals with the juxtaposition of life and death, light and darkness immersed in the human condition. Coated in dark paint and backlit, each handwriting sample, including McQueen’s, stands for an individual whose story remains unknown.

Born in London in 1969, Steve McQueen is one of the most outstanding artists and filmmakers of his generation. His work is collected by museums throughout the world, not least by Tate Gallery, London, MoMA New York, The Art Institute of Chicago, Chicago and the Musée National d’Art Moderne Georges Pompidou, Paris. In 2009, he was selected to represent Great Britain at the Venice Biennale. He participated in Documenta X (1997), Documenta XI (2002), and Documenta XII (2007). Most recently, his work was the subject of retrospective exhibitions, at the Art Institute of Chicago (2012) and at the Schaulager in Basel (2014). The Adrastus Collection will hold Remember Me (#1) artwork since Spring 2016.