Whether working with landscape or designing forms, objects and installations for indoor spaces, Katinka Bock often has territory on her mind. Her oeuvre explores concepts of spatiality, displacement and time with a vocabulary reminiscent of arte povera and post-minimalism.

This German artist’s pieces are utterly devoid of any opulence or redundancy, and in their rigorous poverty and radical austerity, they resonate energy and tension. The artist has stated: “Space and time make my pieces alive”[1]. Using natural and found materials, such as clay, wood, stones, used zinc sheets, steel beams and other urban detritus, Bock creates sculptures and installations that intimately and incisively explore site, origin, material, and process, while also revealing the poetic dimension of space and mining the territories of history and archaeology. Cement, terracotta, stone, metal, wood: commonplace materials, chosen not for their natural appearance, but due to their primary aspect, their intrinsic qualities, their vitality.

The installation April Table (2009) consists of a table with an accumulation of sand, which is gradually eroded through the impact of rainwater collected through a copper pipe that connects the exhibition space with the outside. The installation is synergistic with Die Diagonale (2009), a thread that spans from one feet of the table to the other corner of the room, extending the work’s spatial reach and continuing the rainwater’s deviated flux. 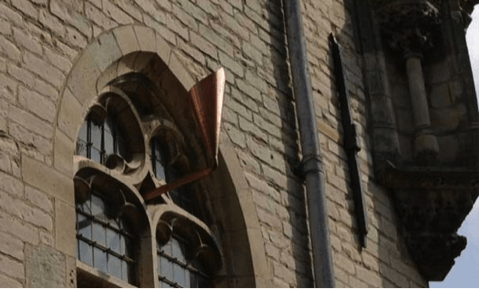 In both installations, we can see an essential component of her body of work: the documentation of a historical trace, which opens up to a dynamic field of tension in relation to the space they inhabit and simultaneously revealing unexpected dimensions to the visitor. At the end, it seems that these artworks wrestle against the claustrophobia of the exhibition spaces, tending to open doors, windows, walls, holes by which to escape or to let in rain or air.

Sober, composed, and concise, Katinka Bock’s pieces are dense, penetrating, and profoundly spiritual. They breathe. They hum. They gently stir the air of the space in which they stand. Their dialogue with the site is fundamental: the process of reflection begins with an observation of the exhibit space and its context. In Die Diagonale (2009) & April Table (2009), Bock shows the importance of how the pieces are positioned in relation to each other and in relation to the site. Using simple, natural materials –employed in such a way that their fragile, precarious changeability is revealed– Bock creates physical, historical and social interconnections between elements of the gallery’s environment. Die Diagonal (2009), for example, explores the space of the hall through measurement of its components, while April Table (2009) reflects the passage of time. Space and landscape are recurring features in Katinka Bock’s work. The artist reconceptualizes the environment of the exhibition’s space through installation works and sculptures that create a relationship between the space’s interior and exterior landscapes. As so often in her work, this joining of inside and outside explicitly in Die Diagonale (2009) & April Table (2009) includes the weather. Rain, wind and sun are allowed a direct influence on the interior space. Consequently, the art works exhibited inside will be shaped by time, changing over the duration of the exhibition.

Via the analysis of space and the nature of processes per se, Katinka Bock’s works are compelling because of their poetic notation, opening up their very own sensual levels.

Bock studied at the Kunsthochschule in Berlin and at the Ecole Nationale des Beaux-Arts of Lyon. She was an artist-in residence at Villa Medicis in Rome, and was awarded with the Dorothea von Stetten Kunstpreis in Germany, the Prix Ricard in France and the production prize of Fundacion Botin in Spain. She has had solo exhibitions a.o. at Culturgest, Lisbon, Portugal; Kunstmuseum Stuttgart, and Nuremberg Kunstverein Germany; MAMCO, Geneva and Kunstmuseum Luzern, Switzerland; Henry Art Gallery, Seattle, USA. Her upcoming solo projects will be on hold at Kunstmuseum Winthertur, Mudam Luxembourg, IAC Villeurbanne Mercer Union, Toronto and Commun Guild in Glasgow.