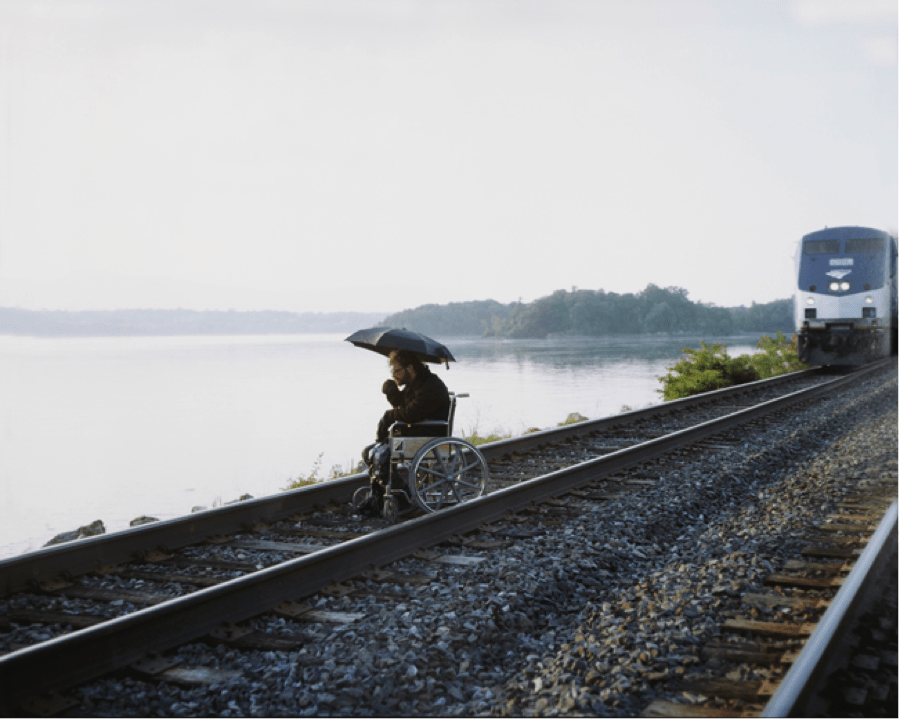 Lieberman’s work is not identified with one particular medium. The artist usually conceives of an idea and then seeks the ideal medium to express it. The result is characterized by a combination of media and techniques: collage, sculpture, painting, installations and digital media.

Adrastus Collection’s Waiting for a Train (2006) consists of a photograph of the artist with a beard hunched over in a wheelchair clinging tightly to an opened umbrella while sitting on a train track, with a train racing towards him. In this artpiece Lieberman’s anti-aesthetic defies the systems of categorization, consumption, and apparent order, though the work teems with a tautology all its own.

Waiting for a Train (2006) is a reversal that highlights the issues of class and morality that form the basis of aesthetic judgment. This image was used afterwards by the artist to create Lexapro (2006). The phrase “DON’T LET IT COME TO THIS” appears above the action and the Lexapro logo with the active ingredient listed below it appears in a white box in the lower right corner. 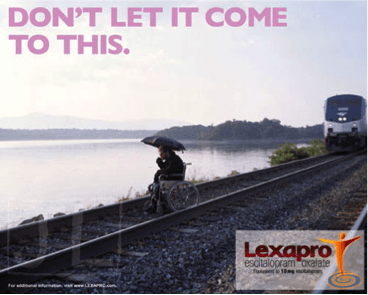 The tension between words and images and the handmade and commercially produced are recurrent themes. Although he has stated that he uses appropriation as a way of avoiding the obscurity of ambiguous forms, it is important for him to deface his appropriations in some way, to remind us of the presence of the individual.

According to the artist he uses or has used the drug. What looks to be a morbid spoof has a confessional element to it. This shifts the moral tenor of the work. Lieberman is not mocking the pharmaceutical industry for trying to push happy pills on us or those people who need them to get by, he is admitting that he also benefits from pharmacological therapy and perhaps wants to remind himself where he would be without it. The goal of an advertisement is to have customers connect with the generically familiar worlds they conjure, but Lieberman reminds us that these computer enhanced fables have a real impact on us. One is also reminded that one of the ironic side effects of taking the anti-depressant/anxiety medication is an increased risk of suicidal thoughts or behavior. So does Lexapro save us or kill us?