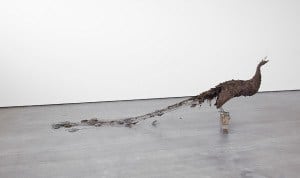 Petrit Halilaj’s art uses autobiography to reconnect with a rooted identity within the circumstantial nature of life. The conceptual pieces of Halilaj involve political conflict, abandon, exile, eviction and dispossession as central axes. As a result of the persecution during the conflict in Kosovo, Petrit Halilaj became forcibly displaced and a refugee child. This disputed territory and partially recognized state, was a constant battlefield amid the Yugoslav Wars and the artist’s infancy.

After the fall of Communism and the outbreak of military conflict in Yugoslavia, the search for national identity became a priority. The Museum of National History in Kosovo’s capital, Pristina, was the main reference available to the distinct characteristics in the life of the Kosavar people, as it formerly exhibited the country’s largest collection of animals, plants and organisms, including over 1,800 stuffed creatures, photographs and documentation. After the war, this space was transmuted into the Ethnographic Museum, attending to Yugoslavia’s disintegration. In 2001, the entire animal collection was removed and stored in hidden rooms, while their space was used to display folk tradition and heritage. This theme was highlighted in Halilaj’s latest solo exhibition at the Bundeskunsthalle in Bonn, Germany, entitled Poisoned by men in need of some love. The installation, curated by Elena Filipovic, is politically resonant and critical, and it shows the Kosovar artist attempting to bring The Museum of National History back to life through post-apocalyptic animal sculptures like the Pavo cristatus. These hand-sculpted copies of animal remnants are made from a mixture of Kosovo’s dirt, straw, cattle excrement, glue, and wire. Depicting dark specters of the specimens that used to be displayed and which no longer exist, the series of organic sculptures in Poisoned by men in need of some love represents new life, while simultaneously communicating, ironically and metaphorically, Halilaj’s disagreement with the story behind them.

Constant examples of the illusion of freezing time are common in Halilaj’s desire to preserve the communal memory of Kosovo. The Abetare exhibition in the Kolnischner Kunstverein Gallery in Cologne examines complexes such as legacy, homeland, remembrance and identity, with great empathy. Inspired by kids’ doodles, drawings and writings left once in the classrooms of a former school in a Kosovar village, the artist created an extensive group of artworks made of thin steel that materialize the forgotten childish sketches in grand scale. “The processed motifs, including houses, hearts, birds, flowers, cars, planes, missiles or guns, bear witness to the hopes, aspirations and dreams as well as of the doubts, fears and concerns of former children and adolescents.”1 These filigree drawings suspended in space are enlarged aspirational ideals of innocent dreamers that were once unaware of the sociopolitical conflicts of Eastern Europe. World storytellers, Halilaj’s sculptures like Car are the tridimensional apparitions of infant recollection. 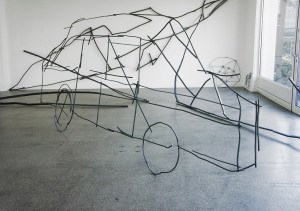 Although Petrit Halilaj’s oeuvre is inseparable from nostalgia and the loss of identity, the artist remains optimistic. Even though the uncanny old feelings connected to war and exile are evidently present, the perception of new possible realities, imaginary dimensions and reincarnation emanates as the inspirational muse behind his artistic production.