The Ghostliness of David Noonan’s Silhouettes 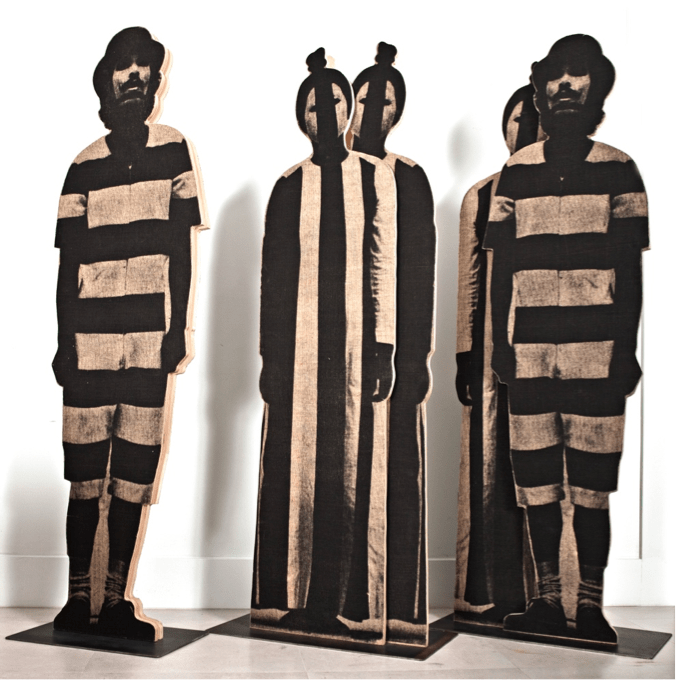 Untitled , 2007
Silkscreen on linen and plywood

The Australian born, but London based artist, David Noonan is known for his work with photographic imagery, frequently combined with abstract imagery, transformed into collages and large-scale silk-screened tableaux. His works often evoke the subconscious realm through their fragmented imagery, allusive qualities and complex layering of historical and cultural references. Noonan’s artistic production hold a magical atmosphere that is suggestive of childhood memories or half-forgotten dreams.

Despite working across numerous mediums such as painting, video or installation, Noonan has come to be recognized for his unique college-based screenprints that allow him to create a visual dialogue between the abstract and the figurative. David Noonan transforms black and white or sepia imagery into striking collages and large-scale silks-screenes on linen. The artist collects photographs, archival documents, magazines and books relating to utopian collectives in the 1960’s and 70’s, theatre and dance performances, juxtaposing the selected images with others of plants, animals and buildings. Thus, these paneled sculptures of figurative characters strike theatrical and grandiloquent poses.

Through a laborious process he carefully prints the chosen images on linen (often several times), and then via a process of selection, elimination, ripping, stitching and gluing, he creates new images for his Untitled (2007) series. Thus, the work appears ruptured, creating an almost a trompe l’oeil effect, and activating the surface of his work.

Adrastus Collection is proud to have a series of David Noonan’s artworks within the collection. His singular creative procees of collaging silk-screened images with textiles, create atmospheric layers of imagery, attempting to negotiate between the figuration and abstraction. Noonan avoids attributing any particular meaning to each work, stating that he wants his works to both individually and collectively emanate an “atmosphere”, and evoke a mood in the viewer.

Noonan’s works demonstrate a concern with the cycling of images throughout history and the temporal shifts of cultural motifs and their ascribed meaning. Over the last decade, he has settled a “retro” imagery in various scenarios, creating new narrative and aesthetic possibilities by collapsing time periods. In this way, he has mastered the art of holding an image simultaneously in time and yet out of time; arrested without narrative and focused on emotion.