Geoffrey Farmer: a Voice between Poetry and Social Commentary

This is where the plate goes. If you stare at it long enough it starts rotating to the right. I imagine the garden on the carpet doing the same. This makes it a planet. I am flying above the city, spinning. Then… the Babbon is, upset. He is picking at the post and his leathery bottom sits on the branch, which he has worn down. His tail hanging limply, not like a branch, more like a rope. Then the other monkeys, especially the young ones are saying, “share with me”! share with me! In the carpet you can see a plant with a huge eye, and if you stare long enough into it, the pot and the bird emerge.

with As I imagined time-figure, foreseen in the opera just before the dancing spider leg (for Hannah) (Fountain), 2014

The Vancouver artist is something of an archeologist: he surveys cultural terrains from images, text and sound, and presents the artifacts in provocative ways that trigger both recognition and estrangement. Geoffrey Farmer’s career as an artist is multi-media, using collage, photography, video, drawing, sculpture, and many found materials to create complex pieces with can contain sound or mechanical elements to bring them to life.

Farmer has referred to himself as an “arranger,” a designation that shies away from the social status afforded terms like “artist” or “curator,” which could be an acknowledgement of the limits of artistic control. The effect of an artwork extends far beyond its creator, who perhaps has merely provided the opportunity for a capricious instant of significance to arise in the mind of the viewer.

At once fragile and multiform, discreet and omnipresent, Farmer’s This is where the plate goes…(2014) is the product of simple yet strategic manipulations. This installation operates on the same level as everyday experience: simultaneously rational and chaotic, undeniably concrete yet shaped by the imagination. In a voice that combines poetry and social commentary, his work conjures and reactivates a variety of narratives drawn from history, popular culture, art history and social environments. 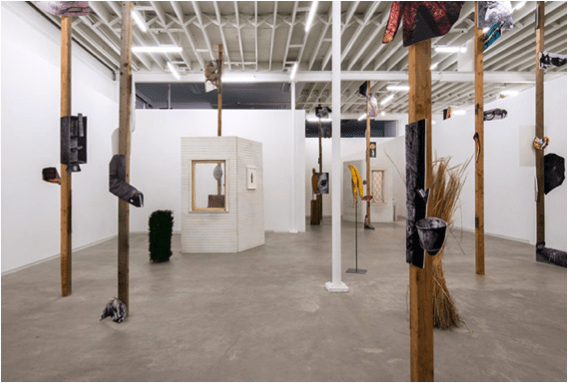 View of the exhibition, “The Grass and the Banana go for a Walk”

Adrastus Collection’s artist, Geoffrey Farmer is known to drastically edit and rearrange his pieces according to the space in which they are installed. Often working site-specifically and with cues from literature, theatre and cinema, his meticulously constructed stage-set installation This is where the plate goes…(2014) pivot on the capacity of social and cultural histories to prompt an active engagement with the construction of meaning. It also reflects an interest in both its fictional power and its temporal component. In this piece, part of Adrastus Collection, Farmer focuses on particular features of these diverse sources, notably concepts of the work and process, transformation and performance. In Farmer’s case, “work” is more a verb than a noun; the majority of his works are perpetually in progress, evolving from exhibition to exhibition and even, often, from day to day.