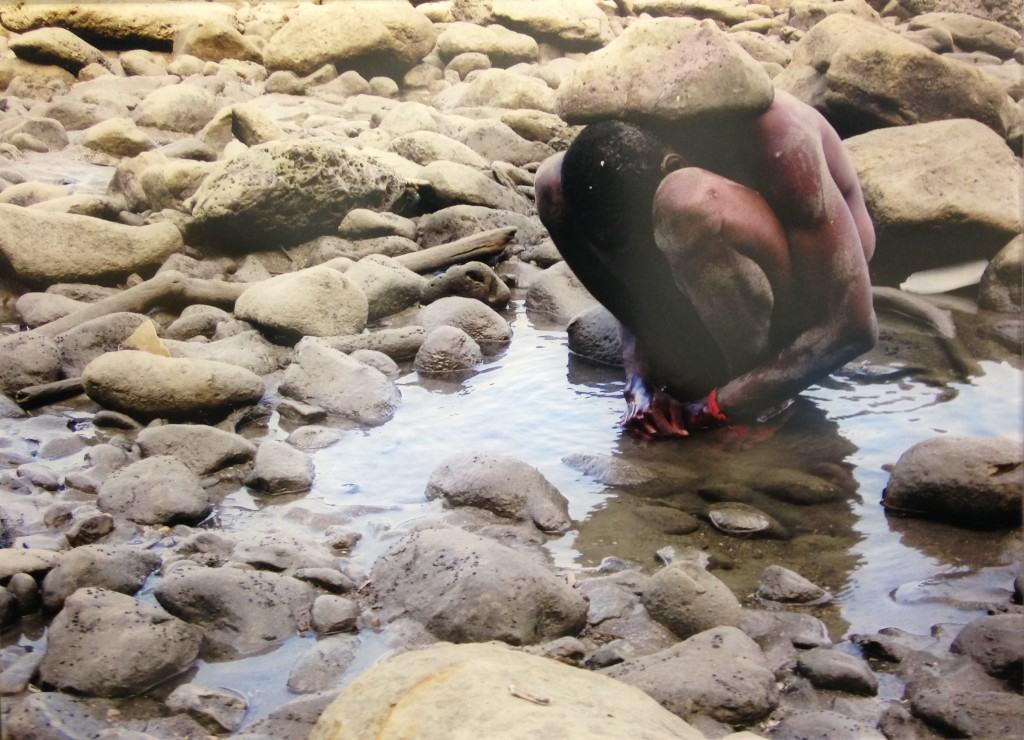 Carlos Martiel, a Cuban-American performance artist, has been described as provocative and raw. His explorations of existence’s nature, social barriers, and cultural traditions, have been described as aggressive comments on ethics. Commenting on issues such as censorship or persecution for cultural or political reasons, especially in his country, the artist sees his performances as a response to the way society and history have treated minorities and outsiders. For him, “Action is an effort of junction which is translated into a geometrical-performative tension, into grief and nearly mantric ecstasy of a body declined into its unshakable alterity.”[1]
The artist uses his body as a vessel for these expressions, putting it in difficult situations and painful states. By removing his clothes and harming himself, Martiel humbly offers his body as a statement against the prejudices and rejection that he and his hometown have faced. Asentamiento, (2012) is the photographic vestige of Martiel’s performance on the beach of Manta, Ecuador. There, he entered the sea and held a rock over his shoulders for one hour.
In Martiel’s work, the context of belonging and the awareness of his own body are always shown as being the mutable outcome for complex processes of attribution. In Asentamiento, (2012), the desert-like beach is as inhospitable as his feeling. In this art piece, the artist’s body turns into part of the landscape to be crossed and covered, his skin becomes a painting to be personalized and understood with specific signs of belonging. 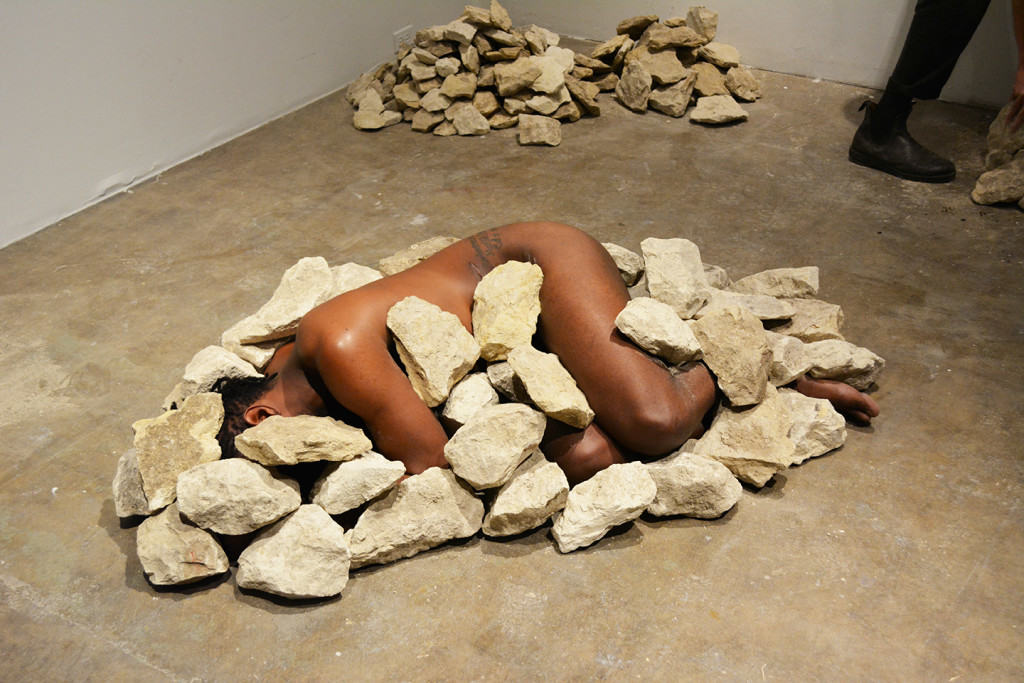 Martiel’s performance Ruins held at the Central Trak in Dallas.

This is not the only time the artist has used rocks in his work. During his performance Ruins (2015), held at the Central Trak in Dallas, the artist laid naked on the floor of the gallery in a fetal position, while Caucasian men covered him with rocks until his body became invisible. This performance was an homage to all the people who lost their lives under inhuman and cruel conditions of injustice, slavery and discourtesy. In his statement, Martiel recalls the sixty million African people that were captured by the European conquerors and forced into slavery in the 17th century.
Martiel was born in Havana, where he became aware of his creative talents at a very young age. When he was growing up, his mother worked odd jobs while his father was a cop and later a soldier in Cuba’s military, where he earned several medals for patriotic merit and “internationalist efforts and service in Angola,” [2] the artist says. Martiel studied art for several years and then started experimenting with performance art when he was 18 years old, when he began a series of drawings with his own blood. Since then, Martiel has drawn an inner narrative on the sacrificial canvas of his body, using personal stories as references.
Despite the calculated risks he often takes, Martiel says the challenge of creating provocative art is not always without danger. “There are moments while I’m working where things get out of control and seem to slip out of my hands,” he says. “My work is born from so much injustice, discrimination, repression, abuse of power, uprootedness, and personal migratory experiences. It offers a critique on all of this.”[3]