The Historical Compass of the Allora & Calzadilla Collective

The Adrastus Collection presents Compass, a spatial intervention that explores the threshold between sound and performance. This installation alters the vertical dimensions of a gallery’s space with a fake ceiling made of wood, on top of which an unseen dancer performs, sending the sounds of steps and jumps resonating throughout the empty venue. By reducing the exhibition height to less than half, a new horizontal level re-conceptualizes the gallery. The public cannot see, but they only hear, feel, and sense the composition that unfolds above their heads. The dancer’s footsteps move through the area like a specter in constant motion. In this artwork, the dancer assumes the role of an animated – but invisible- protagonist. Each of the dancers performs their own choreography and each one of the sixteen dancers has a singular weight, sense of timing and movement. The sounds they make are transmitted to the public below in the form of vibrations that penetrate the room and allow for a public experience. 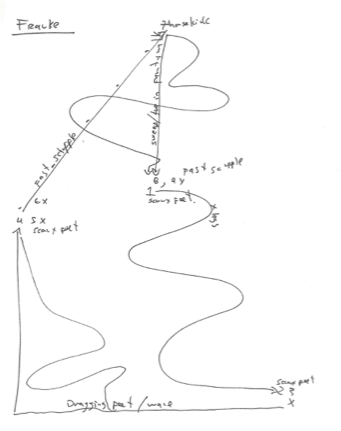 This installation was originally conceived in 2009 for the Temporäre Kunsthalle Museum in Berlin, which had a 10.5 meter-high ceiling. After the fake dance floor/ceiling was placed by the Allora & Calzadilla collective, the height was reduced to 2.9 meters. As the hall’s immensity was reduced by almost two-thirds of its original stature, it gave visitors a feeling of oppression. The resulting sentiment is commensurate to the historical perspective of the installation, which directly alludes to the oppressive emotions felt in and during the existence of East Germany. Further, the dancer located on the top of the listening spectators below represents a political “master of puppets” and the owner of the space. It is intended that the visitor recall the feeling of being dominated.

The title of this artwork relates to the location of the Temporäre Kunsthalle Museum, which was erected in the same place where the Palast der Republik used to be after the fall of the Berlin Wall.[1] More specifically, the title refers to the device that was part of the German Democratic Republic’s flag, which in turn used to wave victoriously over the entrance of such palace.[2] In 1959, the GDR added their national emblem, “hammer and compass surrounded by a garland of corn” in their flag to create a distinction from the flag of the Federal Republic.[3] The emblem was originally meant as a symbol of the alliance between workers (hammer), farmers (corn), and intelligence (compass).[4] But in Allora and Calzadilla’s installation, the title transforms this symbol of socialist collaboration into a historically charged sentiment against dictatorship.

[1] The Palace of the Republic in Berlin was the seat of the parliament of the German Democratic Republic (also known as East Germany), the Volkskammer (People’s Chamber), and also served various cultural purposes. It was completely demolished by 2008 to make room for a reconstruction of the Stadtschloss (Berlin City Palace), which began in 2013. “Berlin Palace | Reconstruction of Berlin Palace.” Berlin Palace. Association BerlinerSchlosses, 1 June 2013. Web. 3 Dec. 2015. <http://berliner-schloss.de/en>.