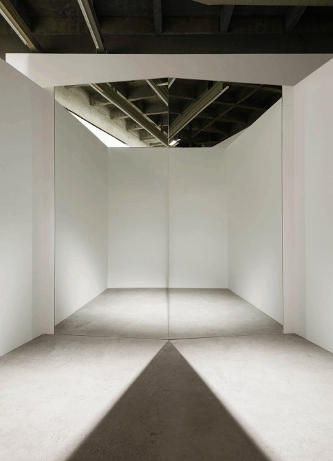 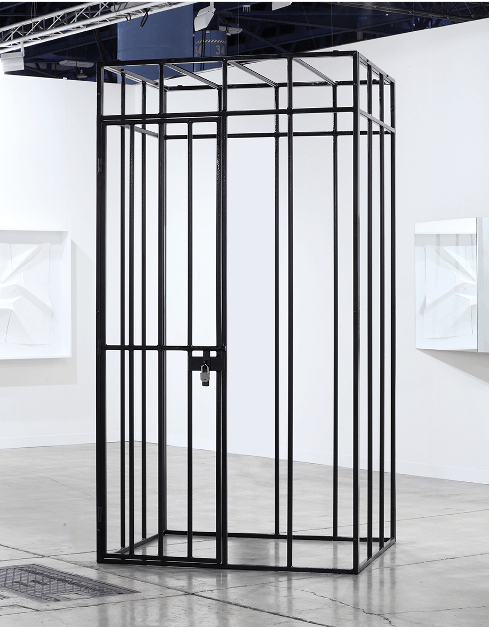 “Basualdo’s works will, whether we want to or not, train our eye to perceive what is not there, what lies beyond. In his works (in his worlds) there is always more than meets the eye: and what does meet the eye is there to lead it towards this dimension of the yet unseen. However much there might be, there is always more: a chink in an otherwise solid door, some extra space and emptiness behind or beyond the continuous lines of everyday life, the ghostly image of what lies beneath the table or behind the wall, the visible shadow of the hidden blade.
His art constructs a peepshow into other worlds.”
—Victoria Noorthoorn[1]

Looking at Basualdo’s early works it is clear that he prefers the use of simple methods to create disturbing interventions in space. His choice in objects range from large installation works of rock-like materials that engulf an entire room to mysterious ropes hanging from ceilings. His work aims to play with our perception of space and the Buenos Aires-based artist is able to reflect this deep understanding of the relationship between bodies and the spaces they inhabit through his transformation of gallery spaces to the simplest of drawings. His early training as an actor and puppeteer has formed the basis of this mastery and continues to serve his imagination in installation work to this day. Adrastus Collection’s works La noche en mitad del día, 2013 and Módulo, 2013 present this strategy as the works confront the viewer in the form of scale as well as the conceptual basis behind it. Conceived specifically for the main room of Gaerlia Luisa Strina, “Testigo” a set of installations, including Adrastus’s work La noche en mitad del día, 2013 and works similar to Módulo, 2013, we see the inspiration of the initiation rites of primitive societies and the artist presents a set of seven large-format artworks made up of walls, steel grids and mirrors, which, like a series of tests is imposed along the extensive room.[2] The link between the two works is the personified state of uncertainty that the two works project. La noche en mitad del día, 2013 presents two mirrors enclosed within a room that propel the light off at angels so that only the right and left sections of the room are lit up. This sectioning of light instantly distorts and isolates the viewer and tests the person to even enter the room. We as the viewer therefore can understand that the only way to see the work is by being outside of it. This idea is then continued with Módulo, 2013 as Basualdo confronts the viewer with a prison-like work with steel bars and a padlock on the door locking the structure closed. Ones initial reaction to a body of work reflective of a prison is one terror or anxiety due to the social qualms that are projected onto its architectural qualities. It personifies restriction, and as if plunging us into a world of strange familiarity, Basualdo immediately forces the viewer to view this structure from a different context. Basualdo puts into perspective the notion of man and his capability of seeing artworks. Expressing himself as so,

“I return to the notion of man at the center of the universe like a lucid eye, capable of seeing everything but incapable of understanding or changing anything. In my work, man always appears as a victim of overwhelming circumstances.”

Eduardo Basualdo was born in 1977 in Buenos Aires, Argentina, where he currently lives and works. He studied at the Instituto Universitario Nacional de Arte (IUNA). Since 2003 he is a member of the collective Provisorio/Permanente, along with Victoriano Alonso, Manuel Heredia, Hernán Soriano and Pedro Wainer. Previously exhibited primarily in Latin America (Argentina, Brazil, Colombia, Mexico, Uruguay), Eduardo Basualdo’s work has recently received international acclaim having been exhibited in Germany, Spain, the United States, and France. Amongst his most notable exhibitions are: El Silencio de las Sirenas at the Lyon Biennale, France (2011), The Traveling Show, Fundación Jumex, Mexico City (2010) and his most recent solo shows at the Rochechouart Museum of Contemporary Art, France (2013) and Galeria Luisa Strina, Brazil (2013), Incisive, PSM, Berlin (2016), Everything you are I am not: Latin American contemporary art from the Tiroche DeLeon Collection, Mana Contemporary, Jersey City (2016), CasiNo | Sentido Único, Galeria Luisa Strina, São Paulo (2017), Perspective of Absence Asociación Argentina de Pesca, Buenos Aires, Argentina  (2018).