“If art cannot make politics more sane, politics, with its insanity, can sometimes make art even better”[1] expressed Edi Rama, elected Prime Minister for the Socialist Party since 2013 in Albania.

Born in 1964 in Tirana, Rama followed the artsy-political steps of his sculptor father who also worked as an official when Albania was under the control of Enver Hoxha, a paranoid dictator who suppressed modern art and outside influences. “The first wave,” Rama explains, “was a wave against religion. In 1967, God was banned. More than 2,000 churches, Roman chapels and mosques, were blown up with dynamite and 300,000 works of religious art and books were burned in the street. Then in 1974 came the second wave, under the spell of this big love story with communist China. Art and culture of the 20th century were degenerate and were forbidden. So from impressionists to the present day we have no sense.” [2]

While studying in the art academy, Rama recalls the artistic educational restrictions and the prohibition of images from artists after 1855. “After that, it was just a white wall. The art history professor would tell us how terrible were the schizophrenic Vincent van Gogh, the antisocial Paul Gauguin, and the diabolical Pablo Picasso. All just words.” [3] 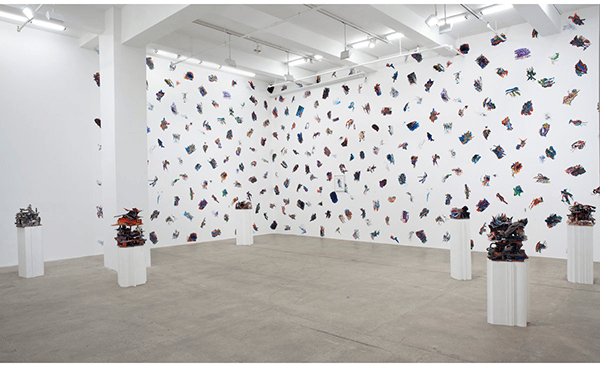 Rama became a professor of painting at Tirana’s Academy of Arts in the waning days of communism, and took part in the protests that paved the way to democratization. He was then awarded a fellowship in Paris, where he remained until his father’s death. While returning to his father’s funeral, the prime minister at the time was reshuffling his cabinet and looking for a culture minister.

It was at the culture ministry that Rama began doodling, almost without noticing. “I couldn’t find a way to survive these long meetings. Drawing helped me to listen. Only much later did I read studies that showed doodling improves concentration or lowers stress. It’s a process that has become completely part of me. And it’s very fruitful. If I’m in circumstances when I can’t do it I feel nervous, I simply feel like I’m not there.”[4] 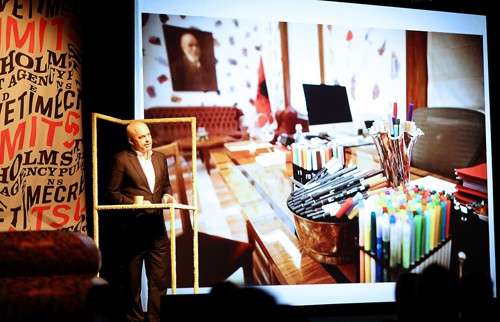 The drawings have matured over time, from idle scribbles into more substantial, all-over compositions. Many recall the automatic drawing of Max Ernst or André Masson, midcentury surrealists who created flowing, biomorphic patterns without initial planning. It is uncertain if Edi Rama’s doodles are the fruit of close attention or daydreaming. Made on printouts of his daily agenda, office notes, protocols, faxes, and other official correspondence, the drawings are like a stream of lava, loosely binding the day-to-day grind. While Rama’s mind focuses on the political context of the discussion, his eyes are focused on the paper, following his hand that draws, like a spiritual medium, his inner experience.

“I found myself drawing almost all my working time whilst interacting with people in my office or on the phone. And I came to appreciate that I wasn’t drawing – my hand was.” What Rama gradually realized was that his drawings were neither a diversionary activity nor an aesthetic indulgence, but becoming an increasingly elucidatory necessity: “I began to understand that my subconscious was being helped or fed by my hand to stay calm while my conscious had to focus on demanding topics and help me avoid mistakes of misjudgment through shallow concentration. Knowing this, later I deliberately took time to be alone and draw when difficult political decisions had to be made, when the calm my hands could teach my head was vital.”[5] 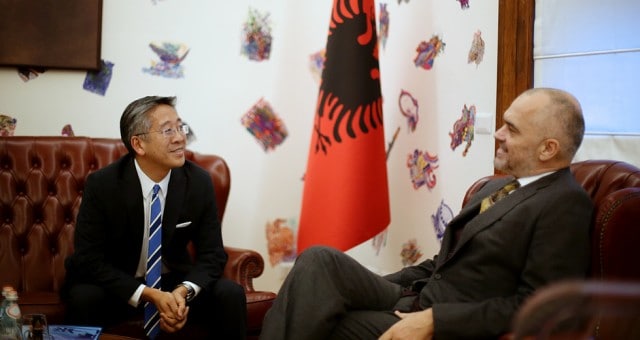 Later Rama not only started exhibiting his drawings as artworks, but took the decision to extend them, as printed wallpaper, across the walls of his ministerial office. Covering the walls of his office in Tirana are hundreds of drawings: colorful, tightly wound abstractions, with tendrils of color spiraling out from densely packed cores. The wallpaper, it turns out, is of the prime minister’s own design. In Adrastus Collection’s most recent acquisition Untitled (2016), the drawings, with their seething colors and winding curves, don’t illustrate, or even abstract, the rough and tumble of politics. Instead, they reassert the individuality of a man whose job is to represent others. This installation seems to be an embodiment of some of the palette and ruinscapes of an earlier Rama-Sala collaboration, the 2003 video work Dammi i Colori.

Rama, who had previously spent 11 years as mayor of Tirana, one of Europe’s poorest capitals, undertook a rough-and-ready makeover project titled Dammi i Colori, ordering its drab, communist-era apartment buildings to be repainted in bright, bold colors. Blue and white stripes cascade down tower blocks; green squares punctuate coral-colored facades; creating a palpable energy when you walk the streets of Tirana. The project of Edi Rama paint the gray, dilapidated facades of Tirana with bright colors and patterns in an attempt to rejuvenate the city after the revolts of 1997. This widespread civil unrest was the result of a complete collapse of the economy that left the majority of the population went bankrupt. Dammi i colori thus documents an attempt to employ artistic practices to somehow alleviate the destructive effects of economic models that are given free rein, an attempt that could be provisionally subsumed under the practices of relational art, or whatever makes capitalism more beautiful.[6] 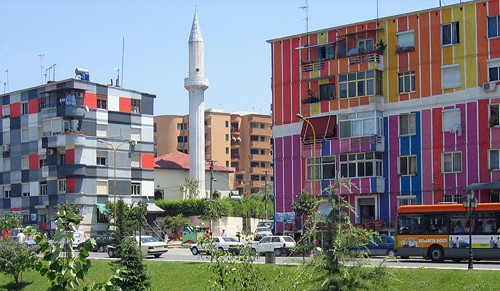 “The colors of the buildings were not art for me. It was a political action, with colors. Because we didn’t have money to make big construction projects. People needed everything: water supply, roads, lighting. When I became mayor of Tirana, there were only 78 lights functioning in the streets. So imagine going to ask people what color you want your building to be! They would say, Fuck you! It would seem the most exquisite way of saying you are not interested in them. It had a chain effect I didn’t imagine. Once the buildings were colored, people started to get rid of the heavy fences of their shops. In the painted roads, we had 100% tax collection from the people, while tax collection was normally 4%. People accepted to pay their share for the city, because they realized that through the colors the city exists.”[7]

What we should interpret Rama’s project is an intent of “avant-garde of democratization”. For the artist, the magical power of art, can change you, even if you don’t realize it. “Which is not the case with propaganda art, which lets you know that it wants to influence you. Free art influences you without letting you know you are being influenced.”[8]

In December 2004, Rama was named the World Mayor and in 2005 he was chosen by Time magazine to be one of the European Heroes, a tribute given by the magazine to 37 people who are changing the world for the better.