Under Discussion: A Solitary Tour of Decay 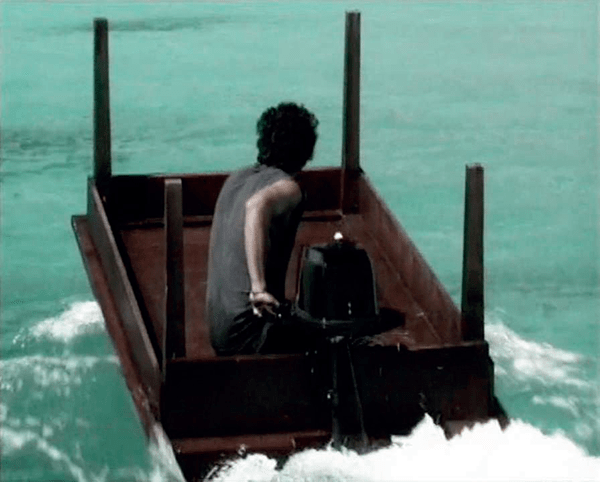 Under Discussion, 2005
Color video transformed to DVD with sound, Duration: 6’ 14

At the beginning of the video Under Discussion Diego, the son of a local fisherman wades into the sea toward an upturned rectangular table in the water and performs an unlikely act of collage-engineering. He attaches an outboard motor to the table, revs it up, and sets out to re-trace the coastline of a picturesque tropical landscape, the passage of the vehicle leaving an ephemeral trail or wake in the crystal-blue water like a kind of drawing. The solitary tour guide does not speak or even gesture, and he has no apparent destination or purpose other than to train our eyes on the verdant contours of the land; yet gradually the angle of the camera begins to take us away from an imaginary position aboard or alongside the watercraft, and we find ourselves following its trajectory from an aerial perspective.

Inhabiting the elevated gaze of a military strategist or development surveyor, our view begins to alternate between the pathway cut by the table through the water and a defoliated terrain pock-marked with craters. We then witness a series of planes, bunkers, and airfields—rusting and overgrown like so many ancient ruins—followed by an elaborate building complex under construction at the edge of the sea and what appears to be a cemetery. After following the vehicle in a vertiginous spiral, we are returned to the horizontal perspective of the helmsman. Passing close to the shore, we see two pieces of apparently incongruous signage. One reads “Welcome to the Vieques Wildlife Refuge,” entreating us to “please help us protect the plants and animals” and specifying the “permitted activities” of “nature observation, hiking, and photography.” The second is marked with a skull and crossbones and reads, “No Trespassing, Authorized Personnel Only: Danger—Explosives.” 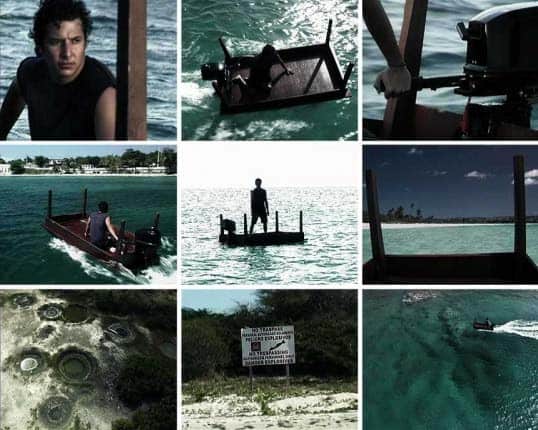 In Adrastus Collection’s artwork Under Discussion, the skull and crossbones do not so much speak to the universal ravages as they mark the extremes of simultaneous duress and negligence to which a specific population and its life-support systems have been exposed for more than half a century.

Under Discussion is part of a long-term, multi-phased project concerned with the political and ecological conditions of what Allora and Calzadilla describe as the “transitional geography” of Vieques, an inhabited island off of Puerto Rico used by the U.S. Navy as a weapons-testing range from 1941 to 2003. It is informed by the following questions, as formulated by the artists: “How is land differentiated from other land by the way it is marked? Who decides what is worth preserving and what should be destroyed? What are the strategies for reclaiming marked land? How does one articulate an ethics and politics of land use?”

Allora & Calzadilla’s film carry a subtle polemic, refreshingly uplifting and humorous as they are quietly thought provoking. In this video, debilitating social conditions might be momentarily reshaped by a brainwave. Such portrait brings a pang of hope and propel us toward the future. 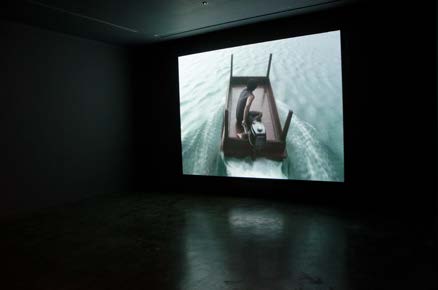