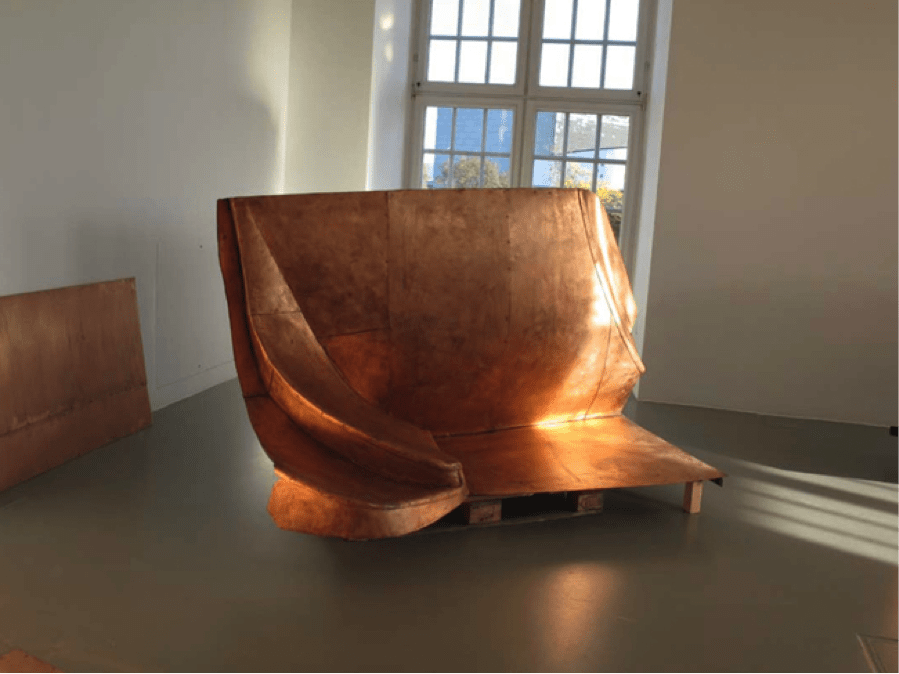 Through installation-based artworks inspired by his life experiences and historically rich readymade objects, artist Danh Vo interrogates the construction of inherited cultural values, conflicts, and displacement. When he was a child, Vo’s family fled Vietnam and settled in Denmark. His work draws on personal and historical facts that directly and indirectly touch on this experience to examine how such items are dispersed across borders or symbolize transnational movements.

Vo’s long-term project We The People (detail) (2011), reconstructs the Statue of Liberty on a 1:1 scale. Frédéric Bartholdi originally designed the statue as political propaganda for the French opposition; posed to face the Atlantic, “she” was meant to spread America’s democratic values to France. The statue became an immigrant symbol as its position also served to welcome ships passing through Ellis Island. The objective of Vo’s project, however, is not to erect another statue in its totality but to reconstruct its individual elements and allow them to be dispersed to various museums and art venues across the globe. 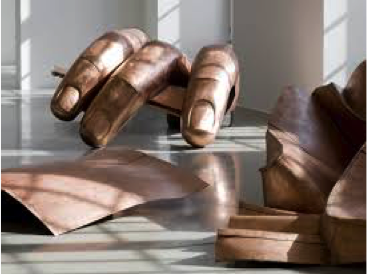 In about 250 individual pieces, Vo’s segmented version is faithful to the original, using the same fabrication techniques and copper material. However, he never intends to assemble all of the pieces of the statue. Instead We The People (detail) (2011), invites us to experience this world famous icon on a human scale, and to reflect on the meaning of liberty from multiple perspectives.

The scattered fragments remain connected to this universal symbol but emphasize the abstract nature of the concept of freedom. Vo’s decision to recreate only the statue’s thin copper skin—at its actual thickness of two pennies—reveals the monument’s material and conceptual fragility, and by extension, the malleability of its meaning.

We The People (2011) brings together a constellation of historical and cultural references that frame Vo’s process, calling attention to the similarities and differences between the means of production in the 19th century and today’s global economic system. While the Statue of Liberty was a gift from France to the United States, paid for (in part) by American citizens, and constructed by French laborers, Vo’s We The People (2011) was conceived in Germany, fabricated in Shanghai, supported by his French gallery, collections and art institutions worldwide (among them Adrastus Collection), and dispersed to exhibition venues in more than 15 countries. 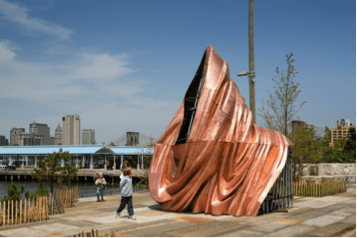 The title for this work borrows the first three words of the preamble to the United States Constitution, underscoring our collective role in shaping democracy. Accordingly, each sculpture in We The People (2011) is part of a conceptual whole, conjuring the full form of Lady Liberty in our mind’s eye. A poetic gesture as much as a sculptural feat, Vo’s multipart copy of the Statue of Liberty is a metaphor for the circulation of cultural values. Like a monumentally-scaled puzzle, these forms ask us to reconsider liberty as it exists globally and locally.

Danh Vo studied at the Royal Danish Academy of Fine Arts in Copenhagen (1998 – 2002) and Städelschule in Frankfurt (2002 – 2005). He has had solo exhibitions in museums and institutions such as the Musée d’Art Moderne de la Ville de Paris, Accademia di Francia in Rome, the Renaissance Society of Chicago, the National Gallery of Denmark in Copenhagen, Kunsthaus Bregenz, Kunsthalle Friedericianum in Kassel, Kunsthalle Basel and the Stedelijk Museum in Amsterdam. In 2012, he won the Hugo Boss Prize. This award was followed by a solo exhibition at the Guggenheim in New York in March 2013. That same year his work was included in the Venice Biennale.