Carter’s Notions of Self-Identity (and Identification) 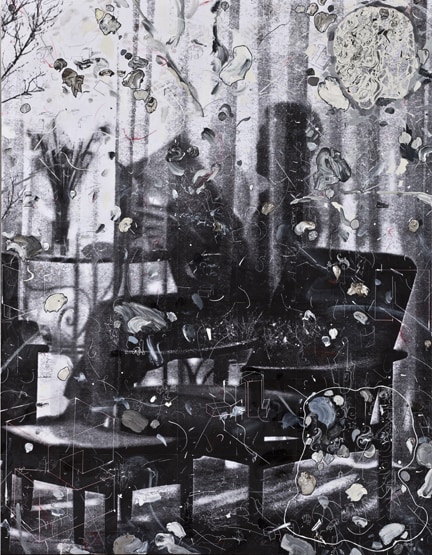 Constant (And, It, The, Become, Although), 2009
Digitally altered and dated interior on folded and defaced laser prints, acrylic ink, paint, pencil, colored pencil, and gel medium on paper and on canvas

In his complex collaged paintings, Carter depicts abstract silhouettes emerging from landscapes of paint, each brush stroke meticulously cut out and placed on the canvas, creating a hybrid of collage and abstract painting. With isolated mark-making and juxtaposed styles, these are both reflections on painting as a process and an evocation of fragmented identities. As portraits, their characteristic is to identify, but a prominent trait of Carter’s gesture covers up as much as it reveals. Carter’s works -typically photographic collages or dense, layered, ink drawings- are a form of deflected (or defective) self-portraiture. Carter’s artistic production seek to obscure, or confuse, notions of self-identity (and identification).

Carter works in a range of media including video, sculpture, installation and sewn-fabric “paintings” that look like unfinished paint-by-numbers pictures. Carter uses abstracted drawing as a means of investigation into the shifting concepts of the human body and personal identity. In Adrastus Collection’s artwork To/is/the/and, Lineaments including large Rock Formation (2008), Carter presents an ethereal scene depicting blob-like specimens, each self-contained like Petri dishes nurturing biological mutation. Using his own features as a control for experimentation, Carter’s panel show subtle variations of the same forms, his abject and non-descript shapes converge as a catalogue of physical possibilities: eyes, lips, noses, and hairstyles float as disembodied samples for facial alteration, while geometric patterns clinically emerge as cell structures, globular tissue, or rough landscapes ripe for cultivation. 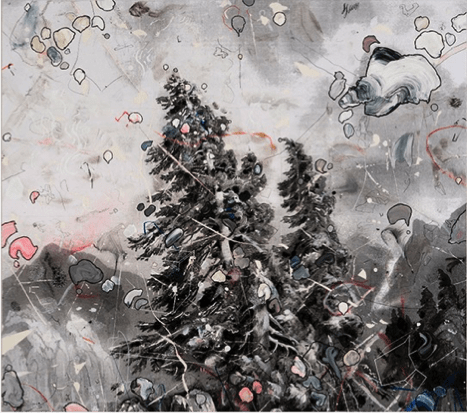 Carter’s artwork Double Void (Although) (2010), directly confronts the unease with the corporeal. Highlighting the imperfection of physical matter, Carter renders his drawings in a clumsy manner, allowing delicate quality of ink to bleed with natural defections, and sometimes fixing the pen in an artificial hand in place of his own. Mapped out as a rough diagram, encircled patterns appear as microscopic organisms; alien and virus-like, they are conjoined by varicose lines, linking them to more recognizable features of hair, heads, and eyes.

It is difficult to tell if Carter means us to relish the possibilities on offer or fear them. Because the images are rendered with such rough simplicity, perhaps a faux naïveté, the project has the feel of outsider art. Adrastus Collection’s Double Void (Although) (2010) evokes a creeping sense of discomfort and anxiety. His work is both inviting and insular, reflecting complicated ideas of self-image, and as open to shifting interpretation as a look in the mirror. 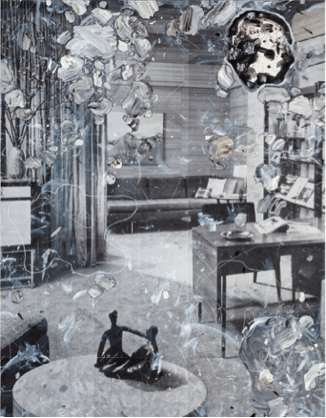 Carter’s work is in the contemporary genre, using various media such as painting, photographs, sculptural installations, and videos. Much like past works, in Adrastus Collection’s Untitled (Modern Obverse #1) (2008), the artist employs a sense of disaffection, combining multiple marks, trails of the brush and added cloths (almost always distinguished by a pair of circles that do a fine job of anthropomorphizing the works) to keep the viewer at a distance. Gobs of color and shapeless puddles of thin paint cluster together, creating a sense of movement and flow through their close proximity. The works seem defined by a sense of inner logic, rather than the impulse of a single architect, and play the surface of the canvas off against its added layers of fabric.