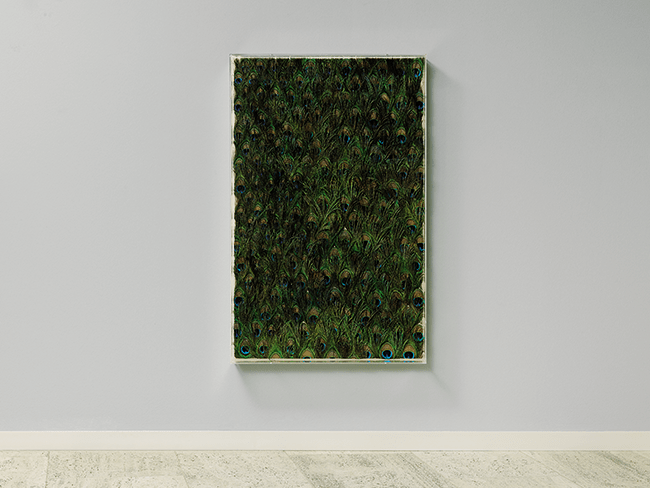 Carol Bove is known for her simple yet intricate works that combine found and made elements. Incorporating a wide range of materials, including steel I-beams, driftwood, and peacock feathers, her sculptures, paintings, and prints yield unexpected, poetic, and multilayered meanings that resist categorization. As the art historian Johanna Burton notes, “Bove brings things together not to nudge associative impulses into free play driven by the unconscious, but rather to conjure a kind of affective tangle that disrupts any singular, historical narrative.”[1]

The durational aspects found in Carol Bove’s work and the manner in which they are implicated through materiality, is a trope she frequently calls upon. In Adrastus Collection’s most recent acquisition Untitled (2011), the canvas is decoratively layered in peacock feathers. Natural light streaming in from a window to the left of the work and the individual areas highlighted by soft spotlights, sees segments of rich greens and blues dance and twist accenting their colors and thus retaining, albeit in a new fashion, the feather’s primary function to attract. The impact of the sunlight throughout the day, as it manoeuvres across the canvases, weighs deeply on the work, steeping it in a poignant finality of aesthetic experience. 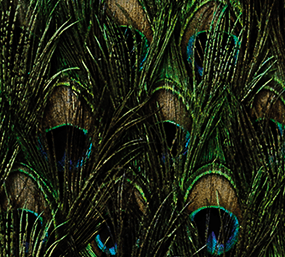 Zoom for the texture in the Carol Bove’s Untitled (2011)

Untitled (2011), by Bove was executed by arranging peacock feathers across the surface of the canvas. The feathers are iridescent and their vibrant coloring is thus only partially derived from pigments, but also dependent on optical factors such as available light and viewing angle. Bove’s work thus acquires an interactive dimension and “responds” to the viewer’s motions in front of it. The dynamic, layered surface invites both close scrutiny and viewing at a distance, with each perspective yielding a different visual experience.

Furthermore, for Bove, the peacock feathers is the iconographic result of an extensive historical analysis full of meaning:

“The peacock feathers—I feel like they have all these different points in history where they have a certain moment of interest and I think about classical mythology—they’re the eye of Hera. In the Metamorphoses there’s this beautiful story about Io and Jove… In Symbolism, late-nineteenth century, there’s this reinterest in peacock feathers, and in Surrealism they have this understanding of the eye quality. And then in 1966 there’s a big exhibition of Aubrey Beardsley’s work in London and there’s sort of a fashion for him and he’s crazy for peacock feathers… then at the same time, in men’s fashion there’s the Peacock Revolution; men’s fashion got exciting all of a sudden in 1966 and they called it the Peacock Revolution…But then, personally, my grandmother really loved green and blue and she loved peacock feathers. Her whole fashion sense and her sense of culture were really related to classicism and classical culture, but then she was always striving to be modern. But she was so backwards-looking that she was never engaged in a legitimate avant-garde—but she was always striving. And peacock feathers were always arranged in her house in a way for me that was emblematic of her forwards/backwards sense of culture. She died recently and so after she died, I became very attracted to peacock feathers.”