Anri Sala: When Sound speaks to History and Memory

Sound and music have always played an important role in the work of Anri Sala. Born in Tirana, Albania, in 1974, Sala creates works mixing images, sound and architecture, shown in exhibits he designs as well as his works completely on his own. In his projects, he seeks to create a correspondence between the objects exhibited, indicate a path to the viewer and create space, physically and related to sound, thus giving shape to music.

Anri Sala employs moving installations and their sounds to probe historical ruptures and failures of language. He explores non-verbal modes of expression through narratives or ideas that can be shared through music or pictures. This distance from a “logical”, direct, language-based understanding, opens the door to multiple perspectives and interpretations. The music in his practice speaks to history and memory; it brings together the past, present, and future of the viewer into a single multisensory experience.

For Sala, sound has always functioned as both and expressive medium and a register of memory, hauntingly subject to erasure. The artist aims to reverse the historical amnesia through the use of sound, which becomes a mean in which he can investigate the relationships between the present and the past, place and displacement.

Adrastus Collection’s most recent acquisition titled Names in the Doldrums (2014), consists of a snare drum whose drumsticks autonomously come to life having been activated by the low frequencies of a radio advert from a human rights organization which lists the names of some Palestinian children killed in Gaza during the conflict in 2014. 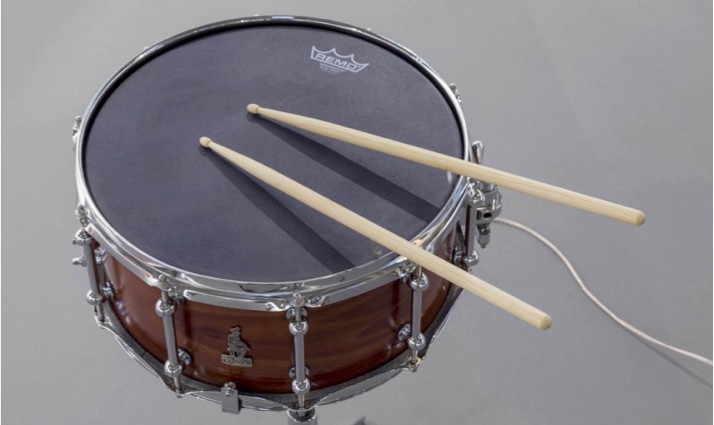 Names in the Doldrums (2014), is a gesture that prompt reflection of the historical sorrow, crowding on a fleeting instance from the violence in Gaza. The low frequencies generated by the listing of these children’s names case vibrations on the skin by the activation of the drumsticks. The disjointed nature of the sound echoing hauntingly around the artwork’s exhibition space is typical of Sala’s works, which often revolve around sound and its fraught relationship to significance.

His artistic production is presented in a wide range of immersive spaces that must be experienced with the whole body, in modified environments with careful movement and sound design that stimulate a visceral experience of the spectator. By creating this state of awareness, the artist urges us to reconsider the relationship of our own space and time to the location and historical moment depicted in his artworks with profound political implications.

The broadcasting of the children’s names was deemed provocative by the Israeli Broadcasting Agency and was consequently banned. While its broadcasting could have been contentious, refusing to do so was in itself a controversial and far-reaching political statement. Names in the Doldrums (2014) coerces the banned advert to suppress itself acoustically and commit an act of self-censorship. By triggering the drumsticks’ reaction and their resulting noise, the advert prevents itself from being heard. This artwork was first shown in his exhibition at Tel Avivi named “No Names No Tile”, which was a reference to the current political climate in the country and the idea of self-censorship.

French-Albanian artist Anri Sala has been announced the winner of the Vincent Award 2014, a biannual European art prize established in 2000. His work has been presented as part of a large number of monographic exhibits, particularly at the Pompidou Center in 2012, Serpentine Gallery (London) in 2011, Montreal Museum of Contemporary Art the same year, Museum of Contemporary Art North Miami in 2008, at the Arc – Museum of Modern Art of the City of Paris – in 2014, as well as at a host of collective exhibits, including three Venice Biennales (in 2003, 2001, 1999), where he received the Young Artist Prize in 2001. He will be presenting his artwork in the next 55th edition of the Venice Biennale 2017.