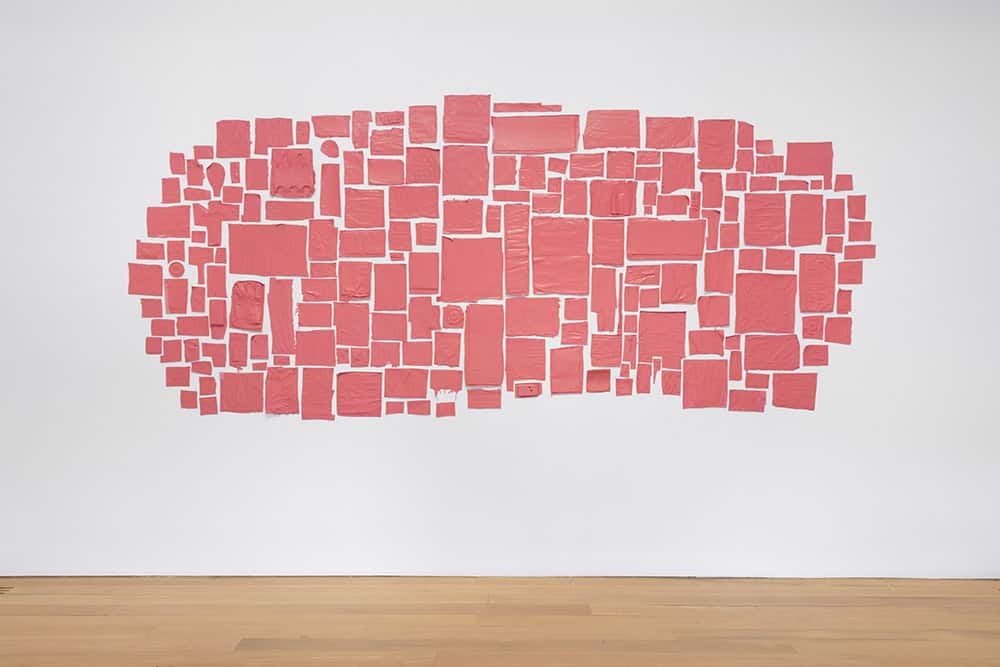 Abraham Cruzvillegas’s artistic process is deeply influenced by his surroundings; rather than being defined by a particular medium and the work proudly owned by the Adrastus Collection is perfect example of this. Translated from the Spanish the work, Blind self-portrait sparked after pushing two hundred grams of popcorn, one hundred and fifty gummies, three hundred of Cheeto’s, two liters of Indian beer, and forty-four Japanese peanuts … describes Abraham Cruzvillegas’s unusual artistic process. The artist is known to draw from the ingenious, precarious, and collaborative building tactics implemented by the people living in Colonia Ajusco, his childhood neighborhood in Mexico City, and linked by the platform autoconstrucción.[1]

This term is pinocle to his practice and the piece Autorretrato ciego sacando chispas después de haberme empujado doscientos gramos de  palomitas, ciento cincuenta de gomitas, trescientos de Cheeto’s, dos litros de cerveza indio, y cuarentavos cacahuates japoneses… because it helps to describe an approach of inventive improvisation and instability. The artist is deliberately presenting change as a permanent state arising in his work as it is from the chaotic and fragmentary nature of life.[2] The evolving notion of autoconstrucción (Self-construction) has, in turn, yielded different approaches such as autodestrucción (Self-deconstruction) and autoconfusión (self-confusion). These inquiries have led the artist to explore his origins and to collaborate with family and friends in a very personal form of research that results in a constant process of learning: About materials, landscape, people, and himself.[3]

The large wall piece consists of 183 pieces of ephemera pinned to the wall with things such as newspapers, tickets, and envelopes, and their backs painted red (you are able to lift them up and check). This shows Cruzvillegas’s inspiration from his surroundings and presents a wide range of collected objects, which helped him to construct his oeuvre. His sculptures challenge the traditional conceptions of art, assembling found objects and disparate materials and then being o bscured by paint. His paradoxical aesthetic drives concepts of identity destruction as he deceives the viewer from what is underneath. His ‘Self-portrait’ is nothing of physical comparison but likens to his environmental-impacted psychology. He grows with his environment, with the use of discarded materials and objects, revealing how his art proves to be an investigative tool of self-analysis that merges history, criticism, and fiction.