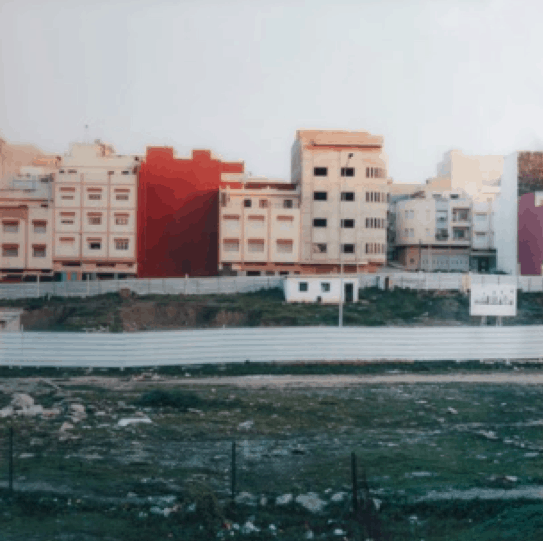 Yto Barrada’s work has always had a focus on frontiers and borderlands that inhabit microhistories, with a sense of autonomy, as the artist has always found herself between borders. Born in Paris from Moroccan parents, Barrada works between New York and Tangier, freely circulating in and out of countries. Tangier, a town that embodies the fate of Morocco and the suffering caused by the loss of social and cultural identity, has played a memorable and tragic part of Yto Barrada’s work. The artist finds inspiration and substance both in these peculiar elements as she documents them with her emblematic photography.

She describes her dual nationality as a fundamental point of departure for her practice: “I think I was a privileged child. I crossed borders without really thinking about it. My parents are Moroccan, but I was born in France. So I’m interested because I could have had the same destiny too – to dream of Europe and never see it come true”.[1] In this way, one can see the artist’s interest in creating a cross-cultural dialogue and this desire was cemented in 2006 when she founded the non-profit Cinémathèque de Tanger in 2006. Tangier’s first and only repertory cinema and archive, is the artist’s commitment to stay in Tangier and bring cultural resources to the city so that other cultures can be accessible to the local community.[2]  With the aim of promoting a cultural exchange, Barrada and a small group of artists curated a program of Moroccan and international films, creating an archive of documentaries, experimental films and video art, opening the dialogue of Tangier and transcending borders through art.

Adrastus Collection’s latest acquisition ‘Mur Rouge, Figure #5’ is a landscape of Tangier. Visualizing the border poignantly, a white wall runs horizontally across the image, with buildings facades running parallel. Barrada often photographs facades with frontal and flat compositionsallowing her to reflect and document reality without any fixed meaning in simple structures that highlight ruptures in the quotidian.[3]  Her images are focused on residues and moments that appear in Tangier, rather than the ideal landscape of a sunset, Barrada focuses on the light setting over the buildings of the city. Taken from a distance, a large proportion of the image is of green pasture on the other side of the wall and the buildings which one can assume the border of the city. Barrada’s photographs aim to “challenge the aesthetic fetishism that has long characterized representations of the Arab world”[4] as she chooses unusual angles that deliberately avoid the kind of picturesque and eroticized aesthetic that usually characterizes the Western idea of Morocco.

The artist’s attention to the city is one of interest as cities are in constant mutation and complexity. In her image ‘Mur Rouge, Figure #5’ of Tangier we find abandoned buildings with dark windows and empty streets, debris lying around. Although Yto Barrada defends the typological dimension of her work, she strives to differ from a purely documentary method: “there is something vulgar in an overly direct or frontal approach, something so focused on the subject that the details and complexity, in which the only valuable information resides, find themselves crushed. The indirect approach represents a form of elegance and, ironically, of precision.”[5] This photograph therefore is able to perfectly manifest the artist’s will to create a body of work that is politically inclined, whilst at the same time embodying in its noble sense of resistance and resignation.

Yto Barrada (born in 1971) studied history and political science at the Sorbonne and photography in New York. Her work —including photography, film, sculpture, prints and installations, — began by exploring the peculiar situation of her hometown Tangier. Her work has been exhibited at Tate Modern (London), MoMA (New York), The Renaissance Society (Chicago), Witte de With (Rotterdam), Haus der Kunst (Munich), Centre Pompidou (Paris), Whitechapel Gallery (London), and the 2007 and 2011 Venice Biennale. She was the Deutsche Bank Artist of the Year for 2011, after which her exhibit RIFFS toured widely. Barrada is also the founding director of Cinémathèque de Tanger. A comprehensive monograph was published by JRP Ringier in 2013. She is a recipient of the 2013-2014 Robert Gardner Fellowship in Photography (Peabody Museum at Harvard University) and was awarded the 2015 Abraaj Prize.