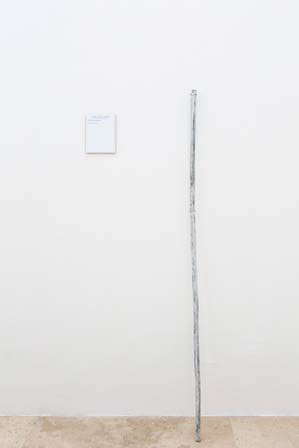 This artwork was part of the exhibition By Boat (farewell) curated by Adam Carr. By Boat (Farewell) is inspired by the story of José Salvador Alvarenga, a fisherman from El Salvador who was blown off course from the coast of Chiapas, Mexico in November 2012. Alvarenga spent some 13 months adrift at sea before being discovered in the Marshall Islands in January 2014.In the visual arts the voyage, and in particular the boat, have been looked at and used by artists for centuries, primarily as means to represent romance, longing, and the desire to escape, discover and renew. Connecting with the tale of Alvarenga and issues that mark its uniqueness—including loss, hope, time and survival— By Boat (Farewell) follows in this art historical lineage, casting such ideas from a contemporary viewpoint through artworks by a number of international artists.

While the backdrop of the exhibition is tied to Alvarenga’s incredible and as some have argued debatable story, it is also linked to the circumstances in which the exhibition takes place. By Boat (Farewell) marks the inaugural show of the gallery’s programe, a new gallery directed by José García Torres who due to turbulent waters leaves behind his former gallery to now journey in a clearer direction… Saying farewell though returning.