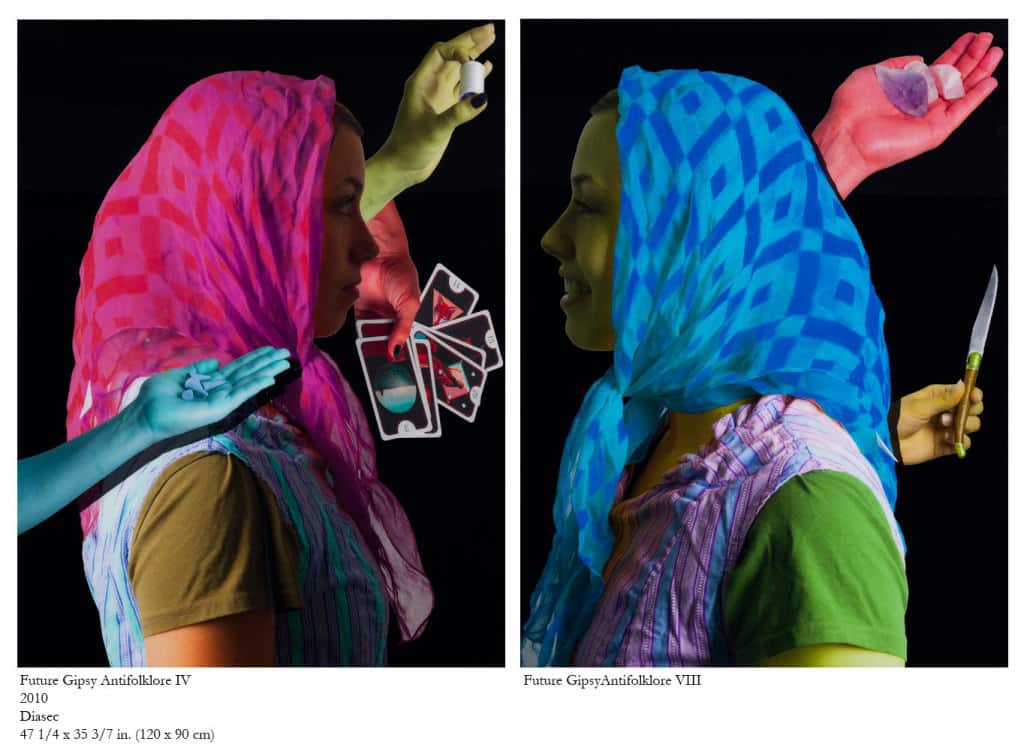 Berresheim’s technique combines painting, photography and digital media to overstep the boundaries of taste. The artist seeks to eliminate the classification of his artworks by pushing the limits between photography and a masterful juggling of digital media. Fascinated by the possibilities of contemporary image production, Berresheim photograph individual elements and then remodels them using a 3D program.

“Unlike in painting, working with a computer offers a vast opportunity to create new pictures – pictures that confound viewing patterns – to surprise yourself with. When you stand in front of a canvas, you can’t surprise yourself that fast with a brushstroke.” Tim Berresheim. [1]

Tim Berresheim draws from the legacy of German artists such as Sigmar Polke[2] and Albert Oehlen[3]. With a slightly surrealistic twist, his collages Future Gipsy Antifolklore IV and Future Gipsy Antifolklore VIII feature disembodied, brightly colored arms with tarot cards, knives, and money to create a visual disarray that lends an elusive quality to the work that is at once unnerving and intriguing.

Tim Berresheim’s current body of work illustrates various collisions between figuration and abstraction, presenting images that are futuristic and fantastic. He frequently, uses collage to combine the incompatible in one image, in the best surrealist style. The large visual range of his work is based in contrasts to create a fusion between reality and illusion, authenticity and simulation through the use of color. The surreal undertones are pushed even further in his figuration: “His digital compositions reveal themselves to be a loosely composed tangle of colorful strings, which is occasionally taken to the extreme of absurd abstract realism.”[4]

Berresheim’s style has been defined as modern digital post-Internet art.[5] Aside from this complex title, his colorful works and tangled compositions in Antifolklore IV and Future Gipsy Antifolklore VIII evoke likeness with expressive authoring, and yet, they reveal themselves as precise three-dimensional digital renderings. His work delivers perceptions that are product of a man and his CPU-powered tool. For Berresheim, working with these new tools, has opened a diversity of imagery and the visual effects.

[2] Sigmar Polke was a German painter and photographer who experimented with abstract works created by chance through chemical reactions between paint and other products.

[3] Albert Oehlen was born in Krefeld, Germany in 1954. He attended the Hochschule für Bildende Künste in Hamburg, where he studied art under Sigmar Polke until 1981. As early as a decade ago, Oehlen set up a studio in a tower of the city walls of Segovia, where he began to work on computer generated images.