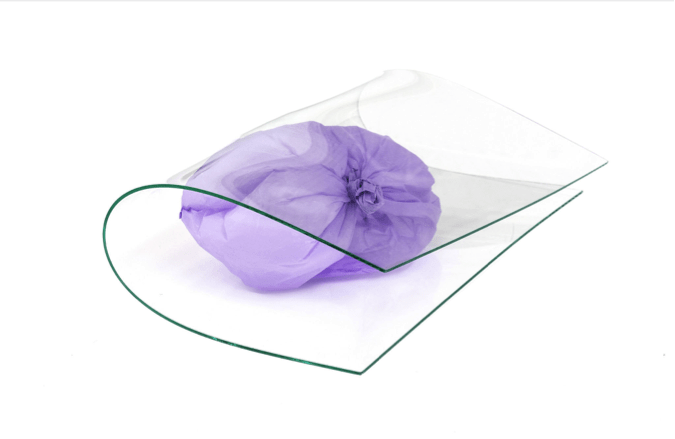 They say it makes miracles

Glass from a window facing north and plastic bag

Tania Pérez Córdova’s sculptures bear signs of routine events that, if looked at carefully, expose a complex network of social relationships. Inscribed in her work are traces of an active life elsewhere. The sculptural compositions of Mexico City–based artist renders objects which might originally seem useless, but her artistic merit relies on the act of disruption which unleashes a series of new meanings and appreciations toward the practical value of the object. Her sculptures are “devices made to create a pause,”[1] as their contemplation reveals past and present events. The artist derives her aesthetic value from her capacity to disturb the smooth flow of certain practicalities in our lives. These relics of personal disruption trigger new realities and hypothetical past events, while arising awareness of their importance in the daily life.

Pérez Córdova underlines the relevance of inserting the original location of the materials in the formalities of the artwork’s description. Traditionally used to describe, the use of captions in Tania’s work is now used to create new interpretations outside the traditional parameters. It is through this specification in the work’s captions that the significance of the artwork arises new meanings for the piece. For example, in They say it makes miracles (2015), the piece was created from the glass of the artist’s studio windows. In this case, this specific window was facing north towards Insurgentes and Eje 2 Sur in Mexico City. Pérez Córdova stated in an interview: “…many people asked me, “So what’s happening to your studio now that it doesn’t have windows? Is rain coming in?” [2] Brilliant and simple, the mention of the window’s orientation in this piece helped in the creation of new images in other places and times.

In each piece, Pérez Córdova requires a truthful connection to the reality in order to create a narrative instead of an artifice. By looking at Adrastus Collection’s most recent acquisition, the spectator can imagine new situations implied from the original location of the glass material in They say it makes miracles (2015). The void of factual events originated from the materiality of the piece, decodes hidden fragments.

Inscribed in her work are traces that connect her still life objects to a complex contemporary world. In They say it makes miracles (2015), the plastic bag encrusted in the bent glass window underlines Pérez Córdova’s interest in quotidian events. They are performative works that do not move, “contemporary relics,” as she calls them. Although perhaps, “contemporary fossils” is more adequate—[3] they are objects that witness life happening around them and slowly, almost as if suggesting sedimentation, give traces of human life. 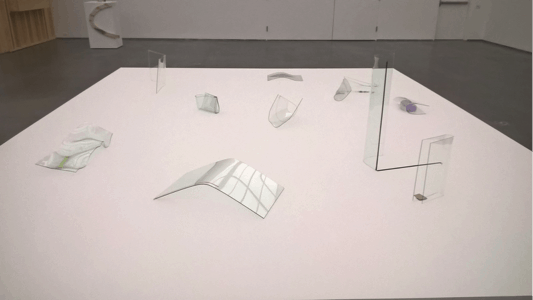 They say it makes miracles (2015) exhibited in Museum of Contemporary Art Chicago.

As a result, Tania Pérez Cordova’s sculptures are simultaneously personal and public, intimate and distant, familiar and generic, meaningful and inconsequential. They are inanimate objects that –if we allow ourselves to engage with them- come to life and reveal individual values, affections and narratives.