Jonathas de Andrade works with installation, photography, and video to explore constructs of love and the process of urbanization, with particular emphasis on Brazil’s vibrant but often overlooked northeast region. The artist’s practice mostly deals with everyday life in Brazil as national identity, colonialism and slavery.

Using strategies that shuffle fiction and reality, De Andrade collects and catalogues architecture, images, texts, life stories and recomposes a personal narrative of the past to traverse collective memory and history. The artist builds his remarkable work through research and investigation. In his work, affections that oscillate between nostalgia and eroticism, as well as historical and political criticism, are employed in addressing such themes as the world of labor and workers and the identity of the contemporary subject, almost always represented by the male body. 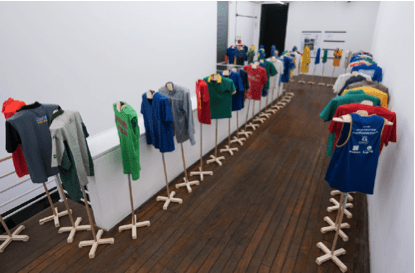 More than 100 workers in the street of Recife were approached by Jonathas de Andrade in order to create Adrastus’ most recent acquisition Suar a camisa (2014). The collection of 120 sweaty shirts -each traded personally by the artist via exchange, pair or donated from workers in Recife-, were put on wooden mannequins and lined alluding to a sort of waiting line: an unemployment line, a line to enter a bus, or even a line of striking workers.

“The sun in Recife burns the skin and the stifling heat drains all one’s energy. It forces those who live in this coastal town in the northeast of Brazil to seek shelter in the shade and to protect themselves from weather that oscillates between splendor and cruelty, violence and warmth.”[1] With Suar a Camisa (2014), the unwashed sweaty shirts of each worker evoke a latent reality of social inequality in this region and confer visibility to the numerous employees subject to economic disparity. 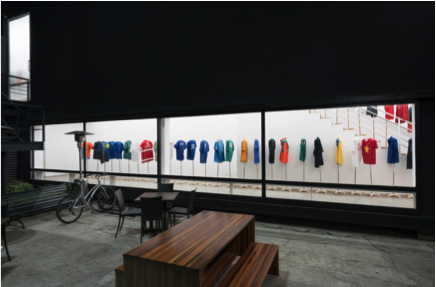 The installation Suar a Camisa (2014) was shown for the first time at the exhibition Museu de Homem do Nordeste, at MAR (Museu de Arte do Rio), where Jonathas showed the largest set of the series of the same name he has been developing since 2013. 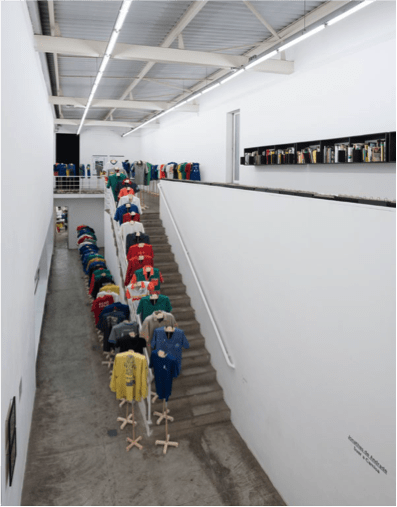 Jonathas de Andrade was born in Maceió, Brazil in 1982, and studied communications at the Universidade Federal de Pernambuco, Recife. He took part in the 7th Mercosul Biennial, in Porto Alegre, in 2009; the 29th São Paulo Biennale, in 2010; the 12th Istanbul Biennial, in 2011; the second New Museum Triennial, titled The Ungovernables, in New York, in 2012; and, more recently, the exhibition of the twenty artists selected, from some 4,000 candidates, for the Future Generation Art Prize 2012 established by the Victor Pinchuk Foundation. Some of his most recent exhibitions include venues such as MoMA (2017), Walker Art Center (2016), New Museum (2017), and Pace Gallery (2016). He has received the Future Generation Prize, Prêmio Marcantônio Vilaça award, and was finalist in the 2011 Prêmio PIPA.