Roman Ondák: Performing on the Heights

It all starts with a prohibition, with one of the many commandoes and regulations we encounter every day, so numerous that our eyes graze over them and we hardly take notice. However, in Roman Ondak’s do not walk outside this area (2012), the eponymous command not to step beyond a certain area comes from a place that seems completely absurd to most of the people.

With his installations, performances, and drawings, the Slovakian artist, Roman Ondák investigates the borders between art and everyday life. The basis for his subtle, sharp-witted works are the transfigurations of commonly founded situations, and transforming or staging them into new conventions. While the influences of Conceptual and Minimal Art are evident, his work also frames references to the subversive tactics of artists from the former Soviet Bloc. The Slovakian art scene, critical of the system, was forced to work in secret and reacted with subtle interventions and public actions to officially sanctioned state art.

The artwork do not walk outside this area (2012) combines two major sets of themes that Ondák has been investigating since the beginning of his career: first, traveling, moving from one place to another, whether it be physical or in the imagination; and second, the rules and conventions that determine our everyday lives as well as the representation and reception of art. The two themes are closely connected to the biography of the artist, who was born in 1966 in Žilina, which was affected by the dissolution of the former Czechoslovakia. 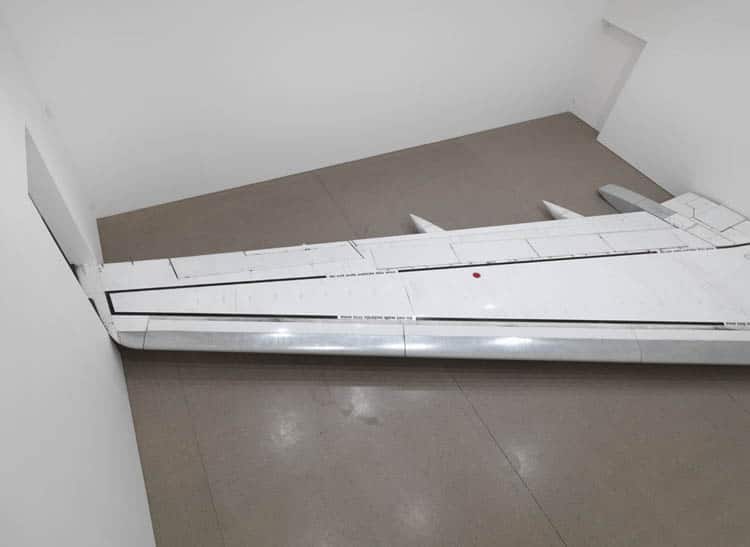 Traveling and moving through space and time is a continuous theme in Ondák’s work. In the case of his artwork do not walk outside this area (2012), it was directly inspired when Roman Ondák founded himself repeatedly spending large amounts of time in airplanes.

It is widely known the demarcation lines on airplane wings that can be seen outside the portholes while on the runway or up in the sky. And it’s almost always the same thought that comes to mind: “How, at an altitude of 30,000 feet, am I supposed to walk around on a plane wing?” And: “Actually, what would that feel like?” It is clear that this instruction is not intended for passengers, but for the mechanics servicing the aircraft. On the other hand, wouldn’t the mechanics already know that? So it is, in fact, intended for passengers in the “unlikely event” of an emergency landing, when they have to use the wings to scramble to safety?

Paradoxically, this strange prohibition unleashes a series of fantasies. Ondák utilizes this mechanism in a very deliberate way. With subtle humor and an absence of didactic urging, do not walk outside this area (2012), secretly leads the visitor where he normally shouldn’t be: to the other side of the line, the “forbidden” area where only our thoughts and fantasies can normally go. The wing is a space that has always been out of reach to us, impossible to explore, and an unintended point of meditation for many window-seated travellers. For this huge sculpture, he deliberately chose an object that is both spectacular and completely unspectacular: “At first, a plane’s wing looks like this huge, bombastic object. But it isn’t, it doesn’t look like anything at all. In reality, it’s completely ordinary. In seeing the form, everyone will be reminded of their own travel experiences, which leaves room for an individual power of imagination.”[1] For Ondák, the sculpture would not work without people. The wing, he says, is a kind of platform on which one perceives oneself differently. It is only complete when the exhibition visitors walk over it. 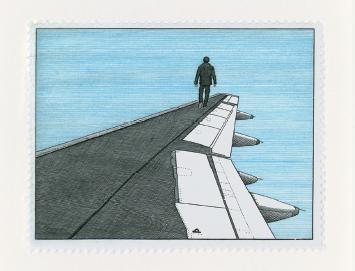 In Adrastus Collection’s artwork do not walk outside this area (2012) makes the improbable possible: the visitor now can walk across the wing with no risk to his or her safely. The wing of a decommissioned Boeing 737-500 was detached from the fuselage and installed into the second of three adjoining rooms in such a way that visitors are obliged to walk across it if they wanted to get into the third room. Each visitor face themselves with a choice: whether to obey the instructions “do not walk outside this area” or not – for as opposed to being some meters above the ground the wing was now lying directly on the floor, so there was no danger of plunging downwards, no jet engine that you might get sucked into, with the result that the command has lost all its former urgency.

do not walk outside this area (2012) is not about the risks involved in evacuating an aircraft and certainty not about demonic fantasies, but about a banal everyday warning that mutates, in an art context, in a conceptual, performative instruction. It is only when the danger is “no longer imminent” that one’s attention can turn to the way in which the artist uses conceptual interventions to structure his relationship with the viewer (for instance by obliging the viewer to cross the space in a particular way). Furthermore, the transplantation of the found imperative (“do not…”) suddenly opens up the imaginary yet also very real option of walking on wings (“do, if you like…”).[2]

Ondák plays not only with the reversal of inside and outside but also with the conventions of the art industry. It is well known the prohibitions, barriers, and boundaries that lend artworks a valuable, exclusive aura and thus fetishize them: “Please do not touch! Do not come too close. No photographs.” But Ondák’s wing is not a hallowed sculpture. It is an object of use that we are supposed to enter and touch. This footbridge serves as a runway for our ideas, memories, and fantasies. In the age of global mobility, Ondák invites us to take an inner, imaginary journey.