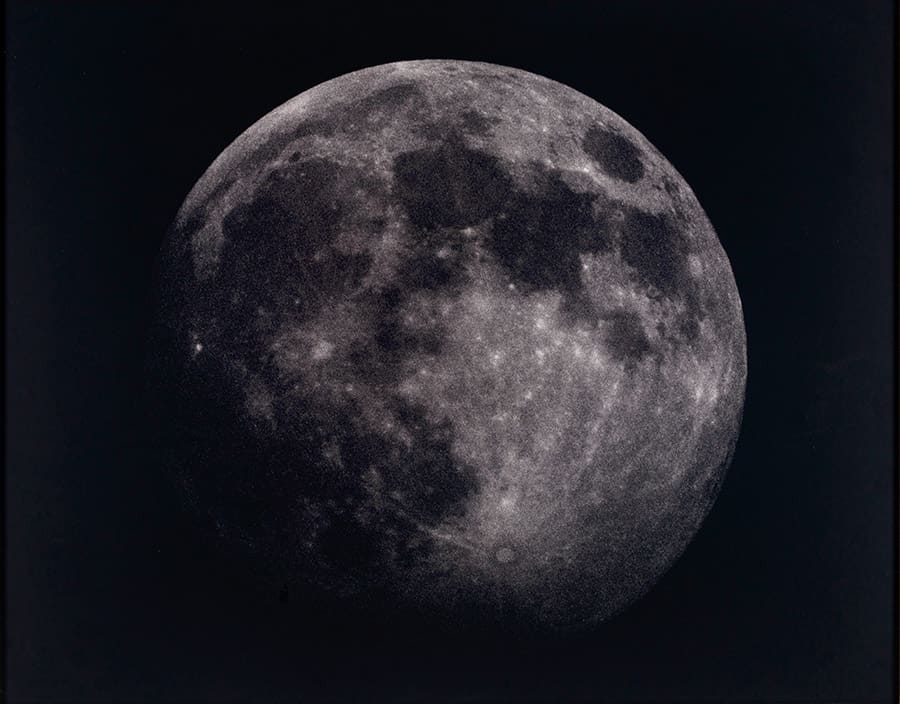 With a keen eye in turning common subjects into objects with a stylized aesthetic, the American artist, Roe Ethridge reroutes his subject matter and inserts it into an odd spatial environment. This sense of oddity is a collective experience for many of his images; taking Coke bottles, fashion models and seashells and implanting an incongruous touch. An image of Ethridge may seem familiar at times, with a likeness of a commercial, yet somehow it projects an awkward and artificial feeling, an unexplainable oddity. Adrastus Collection’s latest acquisition Moon is a perfect projection of this.

Ethridge can be assumed as a wily editor and organizer of his own images[1] as he takes equally from his work as a commercial director and photographer artist, blurring the lines between the two. The artist has himself commented on the difficulty of being a photographer in the 90s and not being considered an artist.[2] In Ethridge’s book Neighbors, released in 2016, he presents more than 15 years of his work, which sees him “collapse distinctions between commercial, conceptual and personal uses of photography”.[3] His oeuvre melds many genres but resources themselves, including borrowing outtakes from his own shoots and other images already in circulation. With this attitude and diverse nature of his imagery he is able to create variable experiences held within the images and regeneration of their significance. Like the title of the book, Ethridge’s also alludes to the personal nature of work, usually including his family and friends as subjects in his images. However, Moon is a flouting distinction between sentimental and commercial photography. Ethridge explores nature and the moon here in ways in which our daily immersion have not experienced before, both mediating and generating meaning in our lives. Etheridge places the moon in the center of the piece and leaves the background black, clearly resembling the depiction of the moon from earth, but taking up almost the entire canvas. This potent illustration is an example of just how masterfully Etheridge bombards his viewers with imagery that subverts the stylistic tropes of each genre and relishes in the oddities of image making and viewing.

Functioning in tandem with the use of subject matter, the motivations behind the mechanics of the photographs also provide an area of interest. Ethridge’s photographs have the ability to both retreat into the personal, and expand in a collective experience. “Nearest Neighbor” is a photographic term for an image that has been resampled by changing the number of pixels, culminating in the creation of a new version of the original picture.[4]  One can assume this is the method of technique for the majority of his works and can be used in a way to modify realism with a sense of the peculiar.