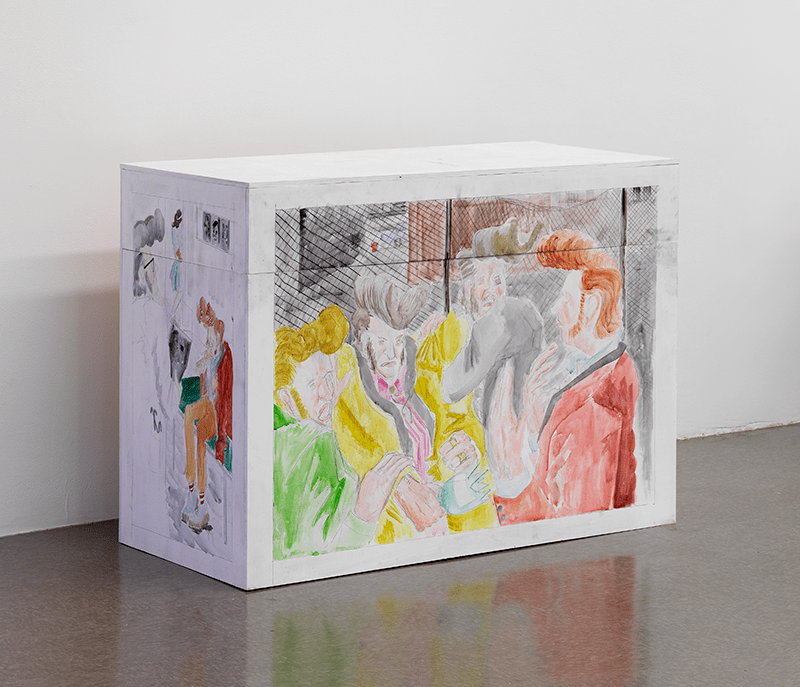 Contrasting the banal with the bizarre is central to the work of German-born and Belgium-based artist Peter Wächtler. Artworks like Teddy Boy 1: At the Doctor; Meeting the Pimps; Feeling Sick, 2015, Adrastus Collection’s most recent acquisition, brings the quotidian into sharper focus.

Wächtler’s works in a variety of media –film, text, ceramics, sculpture, charcoal, pen drawings, and sound pieces- but his primary matter could well be his own pathologies. Wächtler’s practice could be seen as a post literary investigation of media, production, subjecthood, and objecthood – an enterprise that produces alternately comical and heart—wrenching effects.[1]

Peter Wächtler is descended from a noble military family on his father’s side, and as obliged by long-standing tradition to join the army at a tender age. It was in the army when he began to write, and it was there that he learned how to construct complex characters and to lucidly represent spatial relationships.

The artist’s primary material and subject matter routinely trigger speculations about the work’s autobiographical content along with the ironic exaggeration of cultural clichés mirror characteristics of his oeuvre in general. As a narrative virtuoso, Wächtler initiates a moment and then disavows it, an antimodernist lesson in how to charm with silence.

As an artist with a self-expressed passion for pop culture, Wächtler’s work frequently stars a character in happenstances that lace everyday scenes with both stoic humor and mundane melancholy. Playful with undeniably dark undertones, the incredibly narrative personages and scenes in his work expose both major life events and everyday routines on the same platform, poking fun and prodding emotion to evoke an autobiographical playbook with built-in appeals for audience empathy. 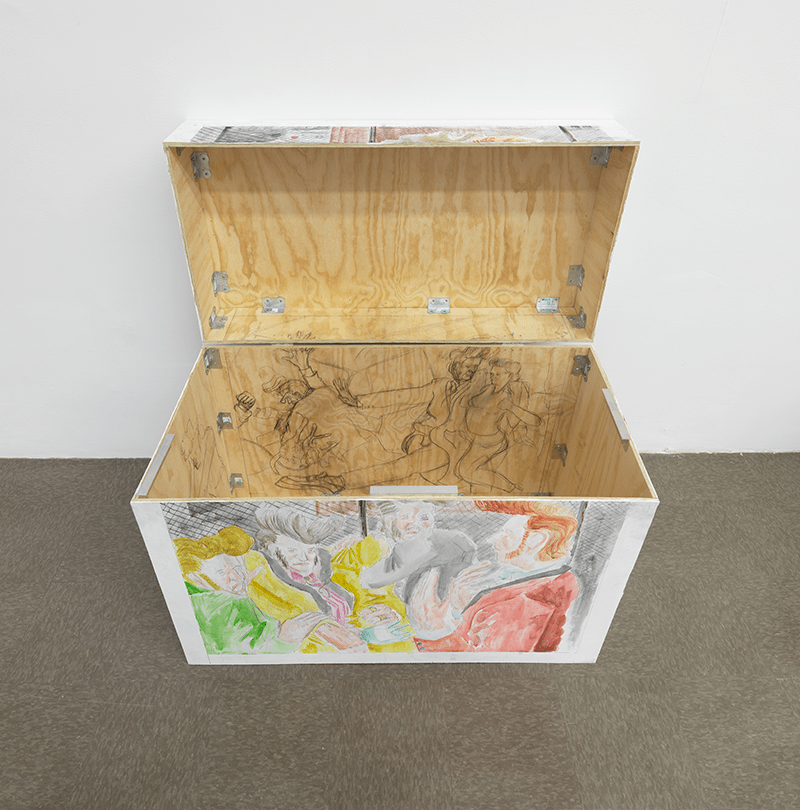 The theme of obsolescence and nostalgia runs through Wächtler’s entire practice, and not only on the level of narrative. The interest in traditional printmaking techniques jokingly professed in his artist’s talk hints at Wächtler’s actual, intense preoccupation with craft and the handmade, evidenced in particular by his sculptural work. The objects often seem like snapshots from his short stories, portraying similar personnel in analogous constellations, settings, and scenes.

Wächtler’s gestural illustrations –some hurried, other languid- are rendered in ways that seem incomplete. Although the images provide only sketches of essential details necessary for representing a complete scene, they convey much more than superficial narratives.

The hand-painted technique Teddy Boy 1: At the Doctor; Meeting the Pimps; Feeling Sick, (2015) is part of the artist’s interest in animation, which painstaking drawing and coloring of hundreds of cels, create a few minutes of footage. The imperfections that make the films testify to their maker’s stubbornness, blood-sweat-and-tears, and stamina, while reminding the viewer that these images has been produced by hand.

The idea of incorporating film scenes into his art is also echoed by the “storyboard sketches” of Teddy Boys that he paints on the outside of the wooden boxes. Teddy Boy is a British subculture typified by young men wearing clothes that were partly inspired by the styles worn by dandies in the Edwardian period, which Savile Row tailors had attempted to re-introduce in Britain after World War II. The figures on the structures, he says, “try to add a little of glamor and class to the working class lives, almost living a life that is edited”[2], as if in a movie. Like our schedule-packed days, this editing distracts us from urgently getting in touch with our lives.

The painted scenes in Teddy Boy 1: At the Doctor; Meeting the Pimps; Feeling Sick, (2015) offer a condensed, nonlinear montage of the dandy’s life as he sprints gleefully through the city streets. The scenes are drawn in a deliberately amateurish style; colors are sloppy and pencil shows through under the paint. It looks deliberately unpolished, in contrast to the elegant appearance. From its expressive, yet calculated marks to the vilified stock characters they portray, the box paintings drip with irony. 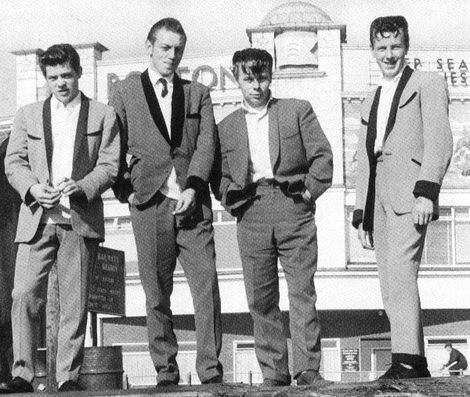 Many of the scenes are abjectly ridiculous. On one side of the present artwork entitled Meeting the Pimps, the moments of sensitivity and farce bleed into each other; though the pimps are almost laughably absurd, their presence cannot trivialize the simple, human fear of our hero’s face. Even in Teddy Boy 1: Feeling Sick, (2015) Teddy’s Boy’s ridiculous hair competes for attention with the dignity of his suffering.

Wächtler’s protagonists, all suffering from a kind of melancholic entrapment within the self, evince the depressive symptoms whose spread since the 1960’s has been linked by numerous theorists to the emergence of the proverbial new spirit of capitalism. His individuals moving aimlessly among an array of simulacral roles, which in turn are subsumed in a welter of images, aesthetics, formats, genres and techniques that –like the various identities to which the artist alluded in his ostensibly autobiographical vision – all feel somewhat outdated.

Peter Wächtler (1979, Hanover, Germany) lives and works in Brussels. He has recently had solo exhibitions at Reena Spaulings, New York (2014), Westfälischer Kunstverein, Münster (2014), and dépendance, Brussels (2013). His work has been featured in numerous international group exhibitions, including 2015 Triennial: Surround Audience at the New Museum, New York (2015), the Liverpool Biennial (2014), La Biennale de Lyon 2013, and Pride Goes Before a Fall – Beware of a Holy Whore at Artists Space, New York (2013).