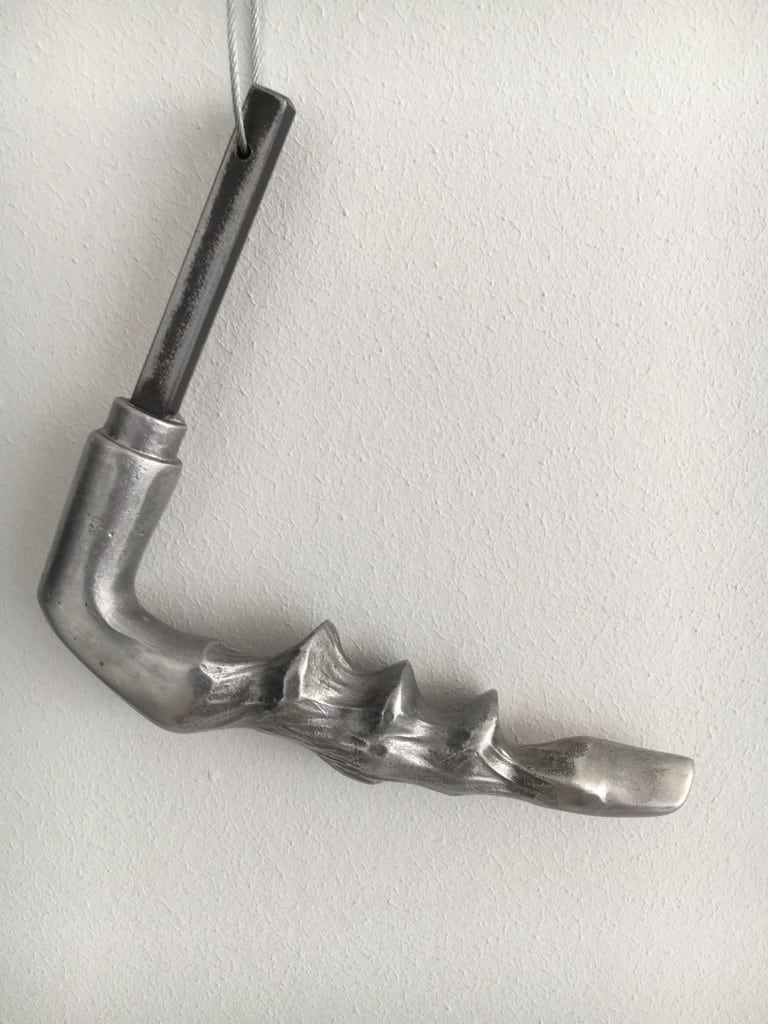 Walls, doors, floors, stairs and door handles -such as Adrastus’ most recent acquisition Handle, (2015)-, resurface throughout her oeuvre in a variety of ways, depending on the aesthetics of the venue. Often disorienting viewers, Sosnowka’s works engage with the politics of space, questioning the ways in which we understand the world. Yet, Sosnowska’s work rhymes with its setting, suggesting the ways in which -whatever the story- the past stays with us in all its possibility.

Sosnowska’s practice can be described as a form of anti-architecture. Her dysfunctional sculptures and site-specific installations reflect the aesthetics of our built environment, while doing away with architecture’s functionality. Sosnowska often uses as a point of reference artworks which introduce the idea of Modernism, understood as a utopia of rationally planned space, particularly the way it was employed in communist Poland. Her pieces are bare testimony to Modernism’s failed utopian project, but also demonstrate a renewed fascination for architectural forms and construction materials.

Regardless of the recurring interest in space, Sosnowska’s works stand as individual objects. This is particularly evident in her contorted furniture, orphaned doors, and handrails. Hanging from the wall are ruinous monuments of the past, present, and future. Sosnowska sees in art a legitimate critic of architecture, and the latter in turn as reflecting political and societal relations.

In the 1970’s and 1980’s Poland saw a huge growth in real estate development, with architectural solutions that followed a low-cost model and were repeated all over the country. Handle (2015) contrasts with the stereotyped models and standardization of building details and features. Here, the artist molded her hand on a handle suggesting a prototype “custom made for each person.” In Handle (2015), the artist eliminated the utilitarian function of the feature and transformed it into a sculptural gesture to create what the artist describes as “impossible figures.”

Monika Sosnowska was born in Ryki, Poland, in 1972. She attended the Academy of Fine Arts in Poznan, Poland, from 1993 to 1998, before participating in various residency programs, including a study at Rijksakademie van Beeldende Kunsten, Amsterdam, from 1999 to 2000, and a residency at S-AIR, in Sapporo, Japan, in 2002. Solo exhibitions include Projects 83, Museum of Modern Art, New York (2006) and Sprengel Museum, Hanover, Germany (2006). Sosnowska also represented Poland at the Venice Biennale 2007 in Italy. Group exhibitions include Les Promesses du Passé, Pompidou-Musee National d’Art Moderne, Paris, France (2010); Monika Sosnowska/Andrea Zittel, Schaulager, Munchenstein/Basel, Switzerland (2008); and Stay Forever and Ever and Ever, South London Gallery, England (2007). She lives and works in Warsaw. In 2003 Sosnowska was awarded the prestigious Baloise Art Prize in Basel, Switzerland, as well as the Polityka’s Passport award given by Poland’s most influential weekly and in 2012 he was a nominee of The Hugo Boss Prize.