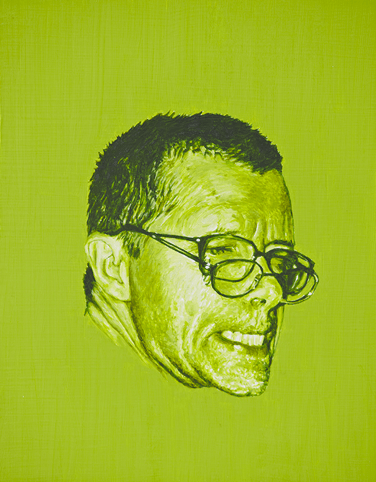 “Jim Shaw is the kind of artist who willfully seeks out the devil in the details, not only on the formal level—in meticulously executed drawings, paintings, sculpture and videos—but also through an exacting process that reveals a wickedly sharp attention to cultural minutia. Whether culling from dreams, music tropes, cult philosophy, last century cast-offs or online auction databases, the artist demonstrates a keen understanding of the arcane resonance of everyday things. By redefining common objects and images into complex (and delightfully improbable) situations, Shaw proposes new points of entry into an alternate American universe, one that resembles past and present realities while remaining just slightly off.”[1]

In Shaw’s Untitled (Self Portrait in Green) proudly owned by the Adrastus Collection, we witness this popular and malleable medium of photography defining a series of moments of American history. Shaw proposes a direct reference to the recognizable and distinguished styled pop art of Andy Warhol, who sought to pinpoint not only iconic figures but also moments in time. He depicts an image of himself posed with a peculiar face and emphasized in a bright shade of green. Finding inspiration for his artworks in comic books, pulp novels, rock albums, protest posters and thrift store paintings, Jim Shaw’s work frequently starts a dialogue with pop culture and alternative realities. Therefore, the work can lead to content systems of cross-references and repartitions, which rework similar symbols and motifs, allowing a story-like thread to be perceived.[2]

The artist initiated what he called the Oism project in the late 1990s, where he explores a fictional religion through media, including video installations (recalling both Busby Berkeley musicals and 1980s aerobics videos) and found paintings in the “Oist style.”[3] Shaw compiled his research with compelling historical oddities, coincidences, and pretenses, all of which inform his fictional religion to form a richly layered practice. Taking liberally from the Art History Masters of Moreover, Shaw seems interested in the way such a dogma in religions such as Mormonism and Christian Science might spiral out of control, and his depictions of this might become earnest and absurd. According to the curator Catherine Taft, “Oism has served as the nexus for projects including an all-male secret rite, elaborately choreographed cinematic dance sequences, an instructional exercise video, an aspirational progressive rock band, and a series of comic books. This last endeavor presently occupies much of the artist’s time, as Shaw diligently works on a storyline that, existing somewhere between literary masterpiece and popular adolescent entertainment, might eventually comprise an Oist overview.”[4]