When everyone else was going to art school, Lambie was always partying around at the English punk rock scene, specifically, the Splash 1 club, which played a major influence in Lambie’s artistic vision. This nightclub, resembling Andy Warhol’s Factory, hosted early shows by “Sonic Youth”, “The Jesus and Mary Chain”, “Primal Scream” and other emerging punk classics. [1] In this location Lambie filmed, not only the videos of the bands performing, but also 1960’s psychedelia at the beat of the “Sex Pistols”. There, the artist also met Richard Hell, the icon of New York’s original punk scene who has been a frequent reference in Lambie’s artwork. 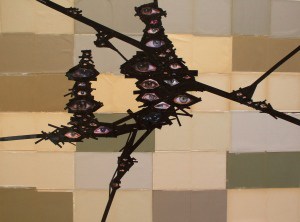 The Glasgow-based artist tried to fit musically in this ambient, nevertheless, he failed: “I was the worst musician in the world, man. I got to the point where there was a bit of frustration. I was technically inept and, although I had ideas, it just seemed to take forever to turn them into something.” [2] Instead, Lambie went to Glasgow College of Art, where he studied environmental art.[3]   For Lambie, the musical sources and inspirations are never hard to discern in his graphic production. His visuals often borrow elements from music. He often describes the 1960’s and 70s’ “junk” he uses in his work as a “universal resonance.”[4]

Pop culture, music, record albums, vintage stores, and bars are just some of the inspirations for Jim Lambie’s work. In his 2004 composition Splash 1, collaged eyes peer out from a vortex of black tape entangling mosaicked fragments that hypnotically expand and refract the space. The eyes, extracted from their original contexts (fashion magazines) floating and staring in every direction.[5]   Jim Lambie’s art can be described as “pop alchemy”, which focuses on the power and energy of everyday objects. The final result often leads the viewer towards anarchic ways of thinking, deforming idols and spaces.[6] 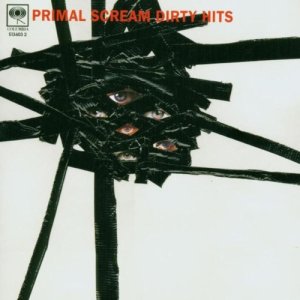 The characteristic aesthetic in Lambie’s artworks within his series, has been used in several album covers, like Dirty Hits, the album by Bobby Gillespie’s band, “Primal Scream”.   Lambie has exhibited worldwide with several solo exhibitions including ones in 2008 at the Glasgow Museum of Modern Art, Glasgow; the Hara Museum, Tokyo; and the Museum of Fine Arts, Boston; and in 2007 at the Hirschhorn Museum and Sculpture Garden, Washington, D.C. He has also participated in numerous group shows, including Color Chart: Reinventing Color, at the MOMA, New York; and Unmonumental: The Object in the 21st Century, at the New Museum, New York. In 2004, he participated in the 54th Carnegie International at the Carnegie Museum of Art, in Pittsburgh, and represented Scotland at the 50th Venice Biennale in 2003. Voidoid, the first comprehensive monograph on the artist, was published in 2004. Lambie was nominated for The Turner Prize in 2005.

[3] The Programme prepares students for working as artists in the contemporary world. While galleries and museums remain major places for art to be viewed, opportunities for artists to make work in and for other contexts and places have increased enormously. To this end, the course offers not only the opportunity to exhibit in the traditional sense, but also explores these other contexts. This contextual approach to art is explored through the Public Art Project, which each student carries out in each year of the course. In this respect, Environmental Art is one of the few programmes in the UK in which students are specifically prepared for this kind of art practice. http://www.gsa.ac.uk/study/undergraduate-degrees/sculpture-environmental-art/