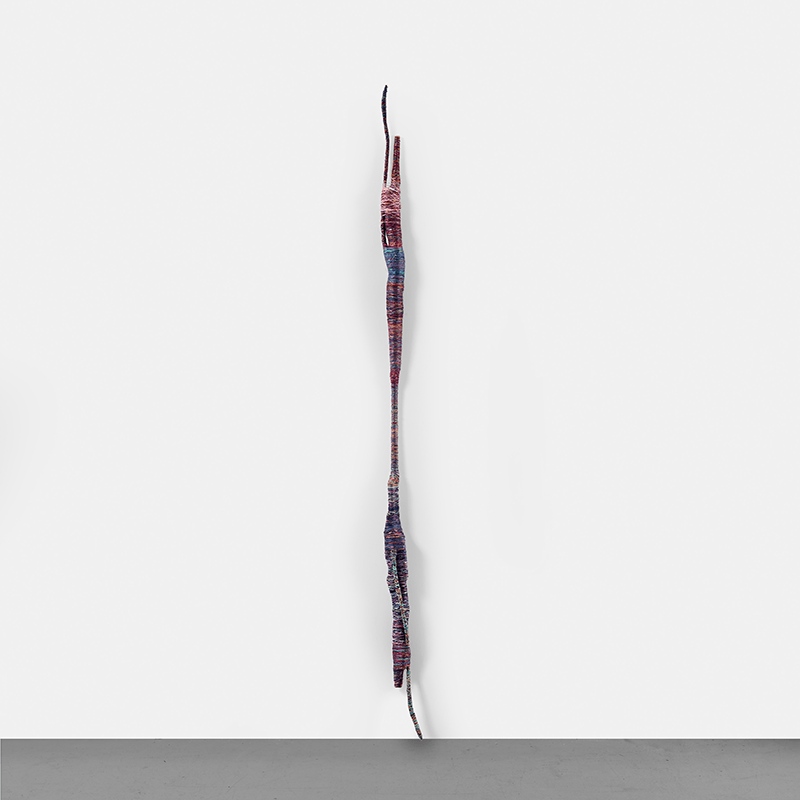 Glasgow-based artist Jim Lambie has an incredibly diverse mixed media-practice that transforms everyday objects found on the street and unearthed at thrift or hardware stores into vibrant sculptures and site-specific installations. Lambie’s work references popular culture, music and the everyday, many times overtly in his choice of titles, but also in his selection of materials and objects. Lambie’s choices of material, form, and color are intended to provoke sensory pleasure rather than informational or intellectual response.

Jim Lambie’s work is subversive and playful at the same time. The subversion is not in the blending of aesthetic categories that followed Marcel Duchamp’s insurrectionary proposal. Instead, Lambie’s work surprises in its blithe, affectionate mix of pop culture and formalist aesthetics. The artist makes his art from ordinary objects, subverting their functions, transforming them and the spaces they inhabit into something and somewhere more magical than before. 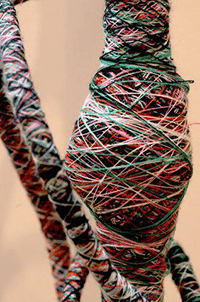 His life as a rock musician at Glasgow club scene bleeds into his sculptural objects, which are made of cast-off record covers, turntables, or posters gussied up with glitter, breads, safety pins, junk jewelry, and other cheap trimmings. These everyday objects fall into the established tradition of assemblage and at the same time covers and modify the original object. For Lambie, the act of covering an object or space is one of ownership; he says, that this act also “somehow evaporates the hard edge off the thing”.[1]

Adrastus Collection’s most recent acquisition, Psychedelic soul stick (2004) is part of an ongoing series of sculptures that Lambie has been creating by wrapping yards of colored thread around a bamboo stick hung with small objects. The cocooned objects are things he handles during the course of his daily life: a guitar strap, a cigarette package and even socks.

Jim Lambie’s work is governed by a kind of Pop alchemy. Covering, wrapping, and adorning the ordinary with the ordinary, he creates contemporary totems, like Psychedelic Soul Stick (2004), a bamboo cane thickly wrapped in thread and wire Such vaguely shamanistic, Lambie take on talismanic overtones transforming the stick into a magical staff. Leaning against the wall, the engagement of this art piece with the space suggests the transfer of energy into the installation.

The form of the Soulsticks draws on a sculptural tradition that includes Richard Serra’s lead “propos” and the colored staffs made by French conceptual artist André Cadere. But perhaps, the more telling allusion is the shaman’s stick: an object used by traditional healers in many cultures as an aid in the journey from profane space to the spirit world. Also, he may also be alluding to Joseph Beuys’ notion of the “artist as shaman”, who is considered as a spiritual mentor of the modern-day world of art. For Beuys, the artist utilized the everyday-life elements and contained layers of meanings and symbols in order to crate an atmosphere for viewer that would unite the intuitive, passionate soul with the intellectual mind, and thus prepare the individual for a spiritual evolution.

Over the course of nearly two decades, Lambie has been shortlisted for the Turner Prize (2005), and with Claire Barclay and Simon Starling represented Scotland in the Venice Biennale (2003). With solo exhibitions in Athens, Guadalajara, Istanbul, London, Melbourne, New York, Oxford, Tokyo, Washington D.C. and work in the collections of MoMA, Tate and the National Galleries of Scotland, he is one of Scotland’s most renowned artists.