The Great (Des) Acceleration by Opavivará! 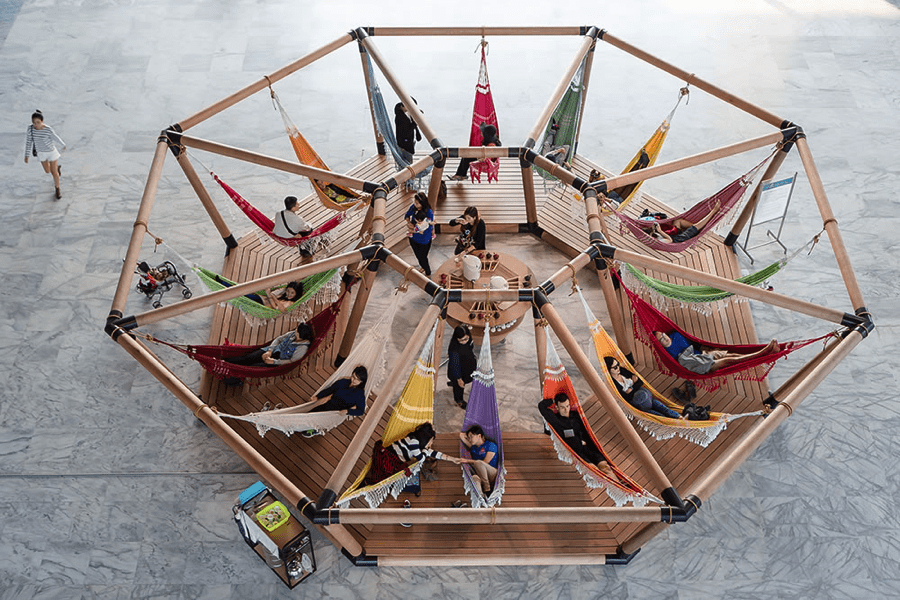 OPAVIVARÁ! is an art collective from Rio de Janeiro, which develops actions in public spaces of the city, galleries and cultural institutions, offering inversions in the use of urban space through the creation of relational devices that provide collective experiences. Since its creation in 2005, the group has been actively participating in the contemporary art scene. The goal is to create situations that activate and increase the power of life. Concentrated on the Anthropocene, OPAVIVARÁ!’s works worship the non-productive and non-active, as it stands as a counter proposition to our accelerated times.

Adrastus Collection proudly presents our most recent acquisition: OPAVIVARÁ!’s Formosa Decelerator (2014), an interactive installation where visitors can rest in hammocks and create their own tea blends. The piece consists of 16 hammocks, held by an octagonal wood structure, with a table at the center, where a variety of tea herbs will be available for people to make tea. Originally conceived for the Taipei Biennale curated by Nicolas Bourriaud, the eight-sided design is inspired by the figure used in Feng Shui as an “energy map” and in Taoist cosmology to represent the fundamental principles of reality. It is a space of deceleration, channeling the creative power of chance encounters. 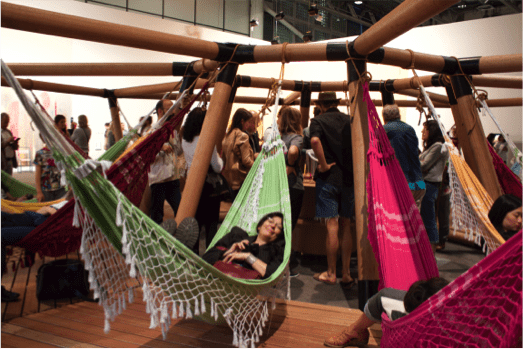 Inspired by Brazilian indigenous traditions, Formosa Decelerator (2014) creates an ambience between the popular practice of shamanism through curative herbs and the hammocks used by indigenous people to sleep. Enclosed by an octagonal wood structure, the sixteen hammocks are an open invitation to relax. The idea revolves around a sort of temple of idleness, an invitation to inactivity, a space that worships the non-productive and non-active and that stands as a counter-proposition to our accelerated, superficial and volatile times. It aims to evoke a collective ambience based on sharing and on the relationships that arise through the interaction of the public, a tool to transform the challenge of living together into a vibrant and pulsating exercise of pleasure, congregation and creative idleness. 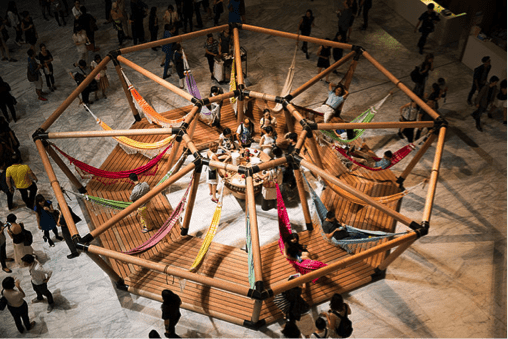 Installation of Formosa Decelerator (2014) in the Unlimited sector at Art Basel 2015.

This installation was created as a space that allows our accelerated daily routine to be stretched, opening up the path to a more organic, pleasurable and reflexive fruition of our environment as a counter proposition to our accelerated, superficial and volatile times. Artist collective OPAVIVARÁ! showcased their installation Formosa Decelerator (2014) in the Unlimited sector at Art Basel 2015.