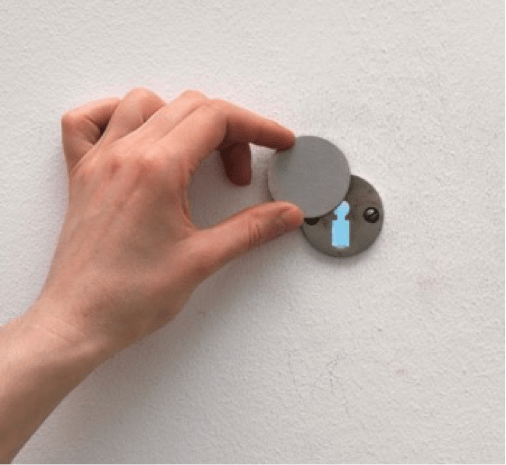 Slovakian artist Roman Ondak (born 1966) is well known for his interventions in exhibition rooms and architectural spaces, extracting everyday objects and found images and repositioning them in participatory installations.

Ondak engages the everyday in both its forms and its processes. However, he inserts slight disruptions in how we perceive something ordinary, by focusing attention on things usually overlooked, or bringing out the absurdities in banal actions and events.

Adrastus Collection is proud to present Keyhole (2012), an installation brilliant for its simplicity while simultaneously incredibly complex and critical on its deepest layers of cognition. This artwork consists of a simple lock located in the inside the exhibition space, in which its keyhole overstep the layers of the gallery and reaches the exterior of the building. One peers through the keyhole into the outside of the gallery or museum, creating a small but bright glance of the day with its passersby and environment. 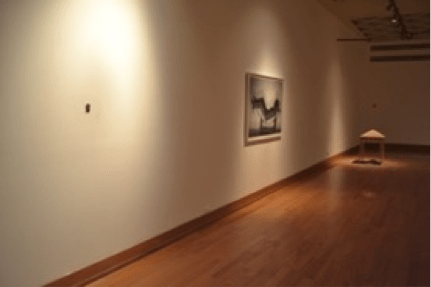 Keyhole (2012) conveys Ondak’s three main points of his artistic realm since the beginning of his career: (i) the rules and conventions that determine our everyday lives; (ii) the representation and reception of art; and (iii) the travel and movement from one place to another, whether it is physical or in the imagination.

(i) Looking through a keyhole is stigmatized by prohibitions and taboos; people who do it usually harbor voyeuristic desires to penetrate the secrets and private lives of others. In this installation, however, the relationship becomes inverted, and one looks from the protected museographic space out onto the public realm, exploring the confines of art and ordinary life.

(ii) The artist loves small, inconspicuous details that have the potential to exert a much larger effect. The grey zone that Ondak allows us to enter with Keyhole (2012) is situated somewhere between private and public experience, between a personal and collective scale. The field of vision is limited to what the hole in the lock is allowing us to see. This suggests a metaphor about subjectivity: we have limits to see, we have limits to understand, we have only one point of view. “We are the eye of a lock.”

(iii) With this everyday object, Ondak allows us to have the ability to change one’s position in a recurrent moment between an interior and exterior view; temporarily transporting us into different places and situations within the same reality.