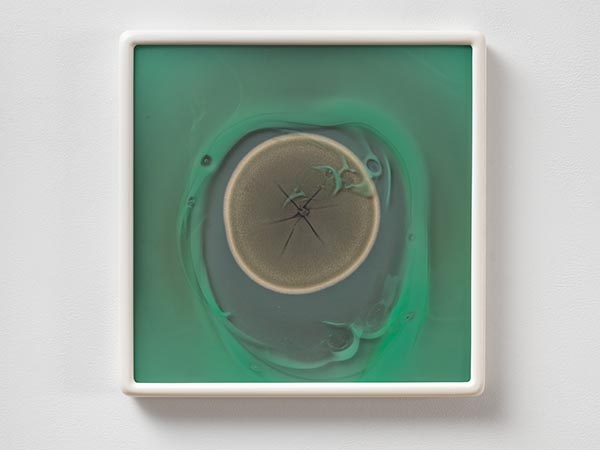 French artist Dove Allouche has a remarkable ability to renew his own language while remaining faithful to his original working methodology. His artistic production has been transformed throughout the years, using a base on the graphic, chalcographic, and photographic techniques, in particular with reference to historical ones from the nineteenth century. These result in visual manifestations rendered mostly in black-and-white tones and, at times, in color. Allouche aims not to produce new things in the world, but rather to make visible that which otherwise remains unseen, hidden or even buried. His practice and subject are fundamentally concerned with the matter of the earth and the slow passage of time. Grounded in reprographic processes, the French artist examines the effects that natural and artificial events produce on them, altering their structure and how they are perceived.

In Allouche’s work, the medium itself becomes the subject and the process of fabrication, thus generating a new imagery. The Cladosporium, sphaerospermum CNCA 13 MA #35 (2017), for example, a valued artwork of the Adrastus Collection, takes its name from a cosmopolitan saprobic fungus that inhabits a variety of environments. It is a fungus belonging to the genus Cladosporium and was described in 1886 by Albert Julius Otto Penzig from the decaying leaves and branches of Citrus.[1] The artist has fostered the fungus growth and at a particular point in their development and photographed them. Similarly, he has also followed this practice for his body of work in the exhibition, Perle (2017), which required the patient growth of organic forms, this time the small, spherical concretions of calcite were formed in shallow cave pools. Like the Cladosporium works, Allouche’s “cave pearls” were sliced into thin films, polished and used as photographic negatives, their mineral cross sections revealing the process of their own creation. [2]  The Contemporary Art Gallery has noted that,

“both series of works were printed as photolithographs, which Allouche fitted into frames carved from a singular block of wood and set behind hand-blown crown glass. The act of glassblowing mirrors that of blowing the spores into the petri dish while the organically formed glass, varying in opacity, color and surface depth, echoes the delicate rondelles of the fungi and the pearls themselves.”[3]

The curator of the show, ‘Negative Capability’, Maria Stavrinaki commented on the works, suggesting that, “The transparency of the glass is also an expression of the intermediary ontology of the images: they were always there, but they had to be seen.” The Cladosporium, sphaerospermum CNCA 13 MA #35 (2017) is a quintessential example of Allouche’s body of work and his continued research into which the processes of art can embody, as well as research into the biological processes of nature. Allouche fascinates the viewer with his constant desire and willingness to dwell in a prolonged state of “not knowing” and to transmit these processes to the public in his artistic forms, displaying his imaginative inquiry of the ‘edge of darkness’.[4]