While emphasizing the real relations that allows us to have agency in the creation of shared worlds, Cinthia Marcelle uses video and photography to document the effects her slight interventions have on the usual order of things. Her actions, often conceived as useless or absurd repetitions, create situations that confront our notions of conventional behavior by introducing often-humorous coincidences and connections.

In 2008, artist Cinthia Marcelle and filmmaker Tiago Mata Machado produced a suite of moving-image works that draw on the writings of Walter Benjamin to explore notions of confrontation, order, and chaos in contemporary society. In this series she collects together individual things and people according to singular qualities, types, or behaviors, and orchestrates collective coincidences. In this case, Buraco Negro (2008) is a subtle and yet powerful interpretation of sex and love.

Adrastus Collection is proud to present Buraco Negro (2008), a video which tracks the movement of white powder across a black surface as it is displaced by exhalations of air. Off-camera, the noise of an intimate exchange of breaths contrasts with abstract patterns that resemble constellations. While the soundtrack asserts a palpable human world, this intimate intensity is at the same time diminished by a viewpoint that alters its scale of significance.[1]That is to say, Marcelle’s video work often conveys this imaginary perspective of a world viewed from above, allowing action to be read as image. 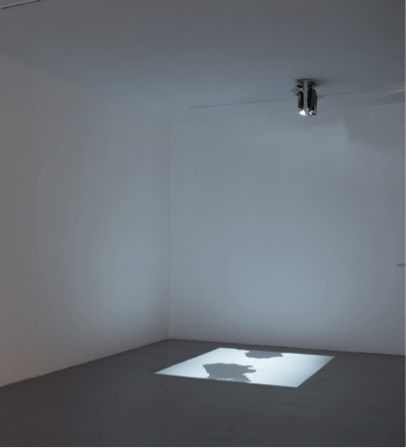