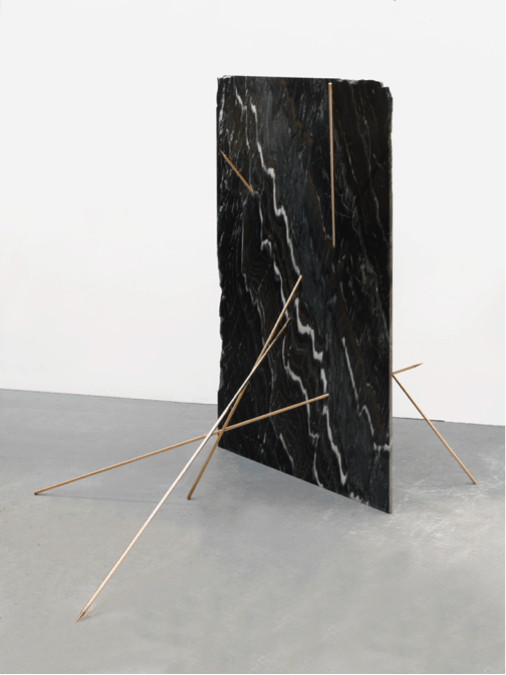 Using sculpture as a means to tap into the most elemental questions of human sensibility, Kwade’s work proposes structures for probing the concentric systems of perception that constitute reality. Often utilizing natural or everyday objects as real-world tethers to the extended concept of materiality set forth by her installations, she reopens the locked doors of scientific, religious, and philosophical models accepted as social agreements and universal truths.

In Kwade’s hands, familiar materials, like plexiglass or copper, are diverted into playful sculptural pieces that upend common expectations of form. She encourages formal observation in her work, and allows the viewer to discover new perspectives through their own visual exploration.

Primarily focused on sculpture but often straying into photography and video, Kwade’s practice centres on a compelling series of mind exercises: thought experiments with space and time, jumps into parallel worlds and infinite possibilities, and wildly imaginative explorations of what’s real and what’s not. “I’m fascinated with the borders between science and suspicion.[1]

In Adrastus Colection’s most recent acquisition StillStand (Sterne rauchend) (2018), the marble and the bronze become sites of transference, physical markers of the points at which objects begin to inhabit their objecthood as well as distance themselves from it phenomenologically. As found objects and their reverse facsimiles hover between image space and physical space, a dialectical tension vibrates the barriers between them, each object encroaching on the other’s supposedly impermeable reality. Suddenly everything is possible, reality becomes both infinite and non-existent.

Despite her interest in the ephemerality of life, being, and knowing, Kwade is also quite grounded in the economical and political forces that govern our day-to-day lives. Her use of such materials as copper and marble in StillStand (Sterne rauchend) (2018), are a nod to the value systems that have ruled for centuries, and which have gained an almost unquantifiable power in the daily lives of our society. Through this work, she prods us to question what the inherent values of these objects are, and if a piece of gold could still carry its weight in economical meaning if it were of a different chemical nature. Kwade encourages us to question our acceptance of incorporated value systems, and yet again invites us to step outside of our inherent understandings about materials. It’s precisely through this ongoing practice of philosophical consideration, artistic exploration, and deliberate public engagement that Kwade has proven to be a provocative young artist, shifting the very course of art-making in our modern age.

Alicja Kwade (born in Katowice, Poland in 1979) lives and works in Berlin. She studied at the city’s University of the Arts from 1999 to 2005. Recent exhibitions include solo shows at de Appel, Amsterdam, Kunsthalle Nürnberg, Germany, Kunsthalle Schirn in Frankfurt/Main, Haus am Waldsee in Berlin, and on the occasion of the award ceremony of the Hectorpreis 2015, at Kunsthalle Mannheim. In 2014, she had solo exhibitions at Kunstmuseum St. Gallen and Haus Esters, Krefeld. She has been included in group exhibitions at MAMAC, Nice (2016), Mudam Luxembourg (2015), the Bass Museum of Art, Miami Beach (2014), Kunsthalle Wien (2014), Museum of Contemporary Art Detroit (2013) as well as the Public Art Fund exhibition at City Hall Park in New York City (2013) and CCA Wattis Institute, San Francisco (2012). In 2015-2016, Public Art Fund commissioned “Against the Run,” an installation in New York’s Central Park. In 2017 she participated in the 57th Venice Biennale “Viva Arte Viva” curated by Christine Macel and in the Aros Triennale “The Garden – End of Times; Beginning of Times, #3 The Future” in Aarhus.